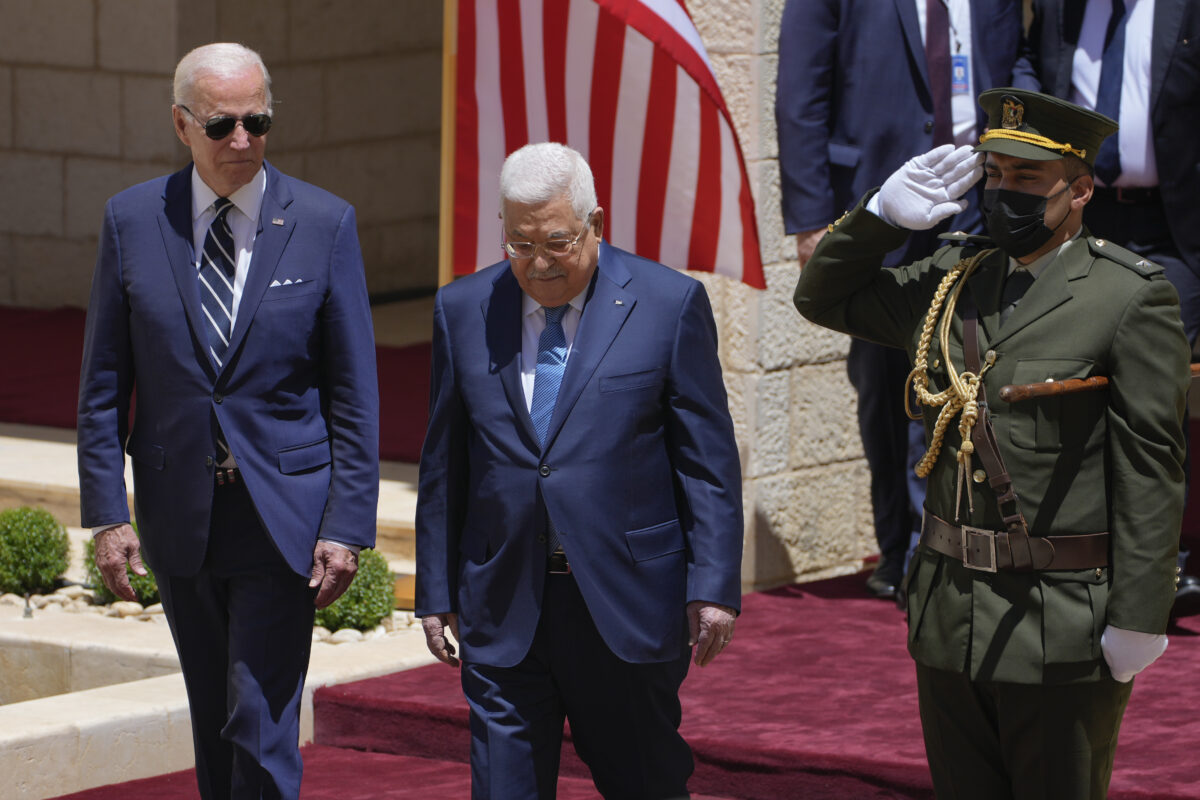 President Joe Biden and Palestinian Authority President Mahmoud Abbas review the guard of honor during a welcoming ceremony prior to their meeting at the West Bank town of Bethlehem, Friday, July 15, 2022.

President Joe Biden announced a series of new economic measures and additional U.S. aid for the Palestinians on Friday in an attempt to improve daily life and restore ties with the Palestinian Authority, which became strained under former President Donald Trump.

Wrapping up his final day in Israel before flying directly to Jeddah, Saudi Arabia, Biden, who spent Thursday with Israeli Prime Minister Yair Lapid, visited a Palestinian hospital in East Jerusalem and traveled the short distance to Bethlehem for meetings with PA President Mahmoud Abbas.

A statement from the White House said the additional aid would total $316 million and come on top of the more than half a billion dollars it has already provided to the Palestinian people since the Biden administration began to restore funding cut by the previous administration.

During his term as president, Trump made several controversial decisions regarding the Palestinians, including withdrawing U.S. membership and funding from some United Nations bodies that serve the Palestinian people across the region. Last year, Secretary of State Tony Blinken announced the U.S. would resume $150 million in funding for UNRWA, the United Nations agency that supports and advocates for Palestinian refugees and restore aid to Palestinian welfare projects in East Jerusalem, the West Bank and Gaza.

The Biden administration, however, has stopped short of reopening the U.S. consulate in Jerusalem, which traditionally interfaced with the Palestinian Authority and was shuttered by Trump in 2018. Recently, Hady Amr, who has served as deputy assistant secretary of state for Israeli and Palestinian affairs since January 2021, was appointed to the role of special envoy to the Palestinians.

On Friday, during his visit to the Augusta Victoria hospital, the president said the U.S. would increase its aid to the East Jerusalem Hospital Network, a group of six hospitals that provide services to some 50,000 Palestinian patients a year. The new multi-year $100 million package will come from the U.S. Agency for International Development (USAID) and is subject to congressional approval, a White House statement said Friday.

In Bethlehem, Biden said the U.S. would adopt further initiatives to support the Palestinian people, including improving access to health care and technology and addressing rising food insecurity in the wake of the Russian invasion of Ukraine.

The president also said that Israeli and Palestinian teams would soon start working to establish 4G digital networks in the West Bank and Gaza, a project that has been blocked in the past due to security concerns.

Biden also said the U.S. would increase its contributions to an additional $201 million to the UNRWA, as well as expand support for programs that will foster people-to-people dialogue to support peace efforts.

In a press conference with Israeli Prime Minister Yair Lapid on Thursday, Biden said that he would “continue to work toward a lasting negotiated peace between the State of Israel and the Palestinian people.”

“Israel must remain an independent, democratic, Jewish state,” he said. “And the best way to achieve that remains a two-state solution for two people, both of whom have deep and ancient roots in this land, living side-by-side in peace and security. Both states fully respecting the equal rights of their citizens; both people enjoying equal measures of freedom.”

Lapid, in response to a reporter’s question about his support for a two-state solution with the Palestinians, said, “I haven’t changed my position. A two-state solution is a guarantee for a strong democratic state of Israel with a Jewish majority.”

A senior U.S. official told Jewish Insider on Friday that the administration was “pleased to hear him [Lapid] talk about his support for a two-state solution.”

Biden, however, drew criticism from some in Israel for visiting Palestinian institutions in East Jerusalem, which Israel officially views as part of its undivided capital. It has applied sovereignty over the eastern side of the city since the Six Day War in 1967.

“President Biden’s unprecedented visit to symbolic Palestinian Authority institutions in East Jerusalem deviates from the standard protocol,” Danny Danon, Israel’s former ambassador to the United Nations, told JI on Friday. “He is the first sitting president to demand such a visit and his visit clearly attempts to challenge Israel’s sovereignty in Jerusalem, the undivided and eternal capital of the Jewish people and signals that Jerusalem’s capital is up for negotiation.”

Danon, who is campaigning to return to the right-wing Likud party in November’s election, also criticized the administration’s decision to bolster its funding to UNRWA, an organization he said was “utterly ineffective in helping the people it was set up to help,” and involved in “promoting terror.”

“It is well established that schools run by UNRWA preach hate and murder of Jews,” said Danon, who served as Israel’s UN ambassador from 2015-2020. “It is known that some UNRWA teachers and staff have close ties to terror organizations such as Hamas.”