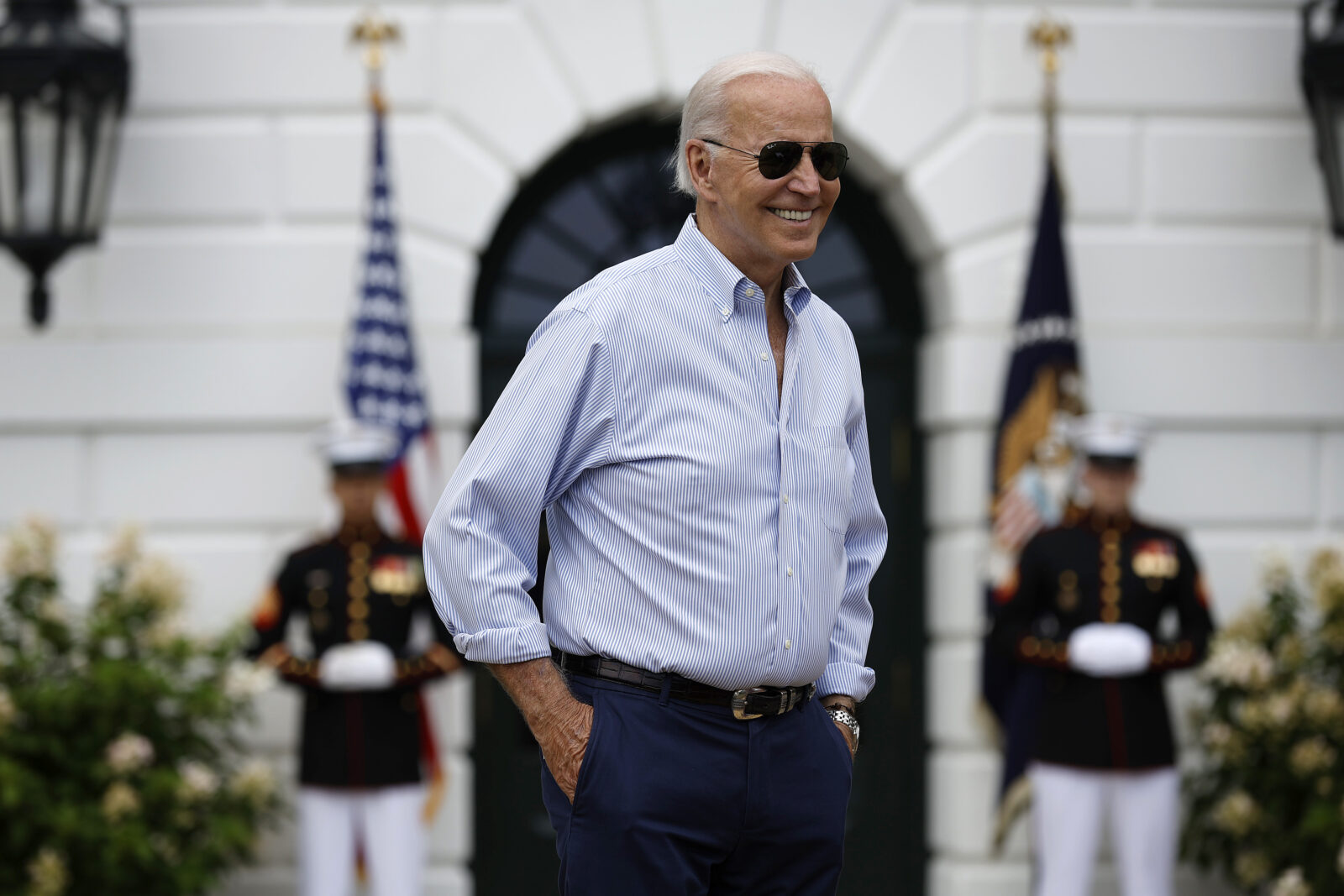 Biden and Israeli Prime Minister Yair Lapid are expected to sign a joint declaration on Thursday affirming the strategic partnership between the two countries, according to a senior Israeli official

From ironing American flags and rolling out red carpets to a specially created logo, designer cocktails, and frantic police notices about security measures and road closures in the capital, Israelis and Palestinians – particularly those in Jerusalem – are gearing up for the historic visit of President Joe Biden, set to begin this afternoon.

Some 16,000 police officers will be deployed across Jerusalem to facilitate the visit, Biden’s first trip to the Middle East as president. In addition to spending some 40 hours – longer than usual for a visiting U.S. president – in Israel, he will also meet with Palestinian leaders in the West Bank before taking the first-ever direct flight from Tel Aviv to Jeddah, Saudi Arabia.

In Israel, Biden and his vast entourage of some 500-plus people, including Secretary of State Tony Blinken, National Security Advisor Jake Sullivan and Special Envoy to Monitor and Combat Antisemitism Deborah Lipstadt, as well as security personnel and more than 100 members of the White House press corps, will be greeted with a festive ceremony at Ben Gurion International Airport.

Israeli President Isaac Herzog, new Prime Minister Yair Lapid and members of the Israeli cabinet, including former prime minister Naftali Bennett, will officially welcome the president as he descends from Air Force One. Due to the warm weather and COVID-19 concerns, however, ministers were instructed to refrain from shaking the president’s hand or taking individual photos with him.

In addition to welcoming speeches, the ceremony will also include a display of Israel’s multiple air-defense systems including the Arrow, David’s Sling, the Iron Dome and the latest laser-defense system, Iron Beam.

In the early evening, Biden and his entourage will visit Yad Vashem, the World Holocaust Remembrance Center, where he will shake hands with two Holocaust survivors – Rena Quint and Giselle Cycowicz, both U.S. citizens – lay a wreath in the Hall of Remembrance, and sign the visitors guest book.

Yad Vashem Chairman Dani Dayan, who will greet the president, told JI that “President Biden’s visit comes at a critical time when we are witnessing appalling statements regarding the Holocaust with racial connotations.”

Referring to comments by “The View” co-host Whoopi Goldberg and a recent Twitter storm about Anne Frank having “white privilege,” for example, Dayan added, “These incidents highlight the need for more Holocaust awareness and education. A high-profile visit by the American president adds to the public’s interest in the Holocaust as well as exposes new audiences in the United States to the subject matter.”

On Thursday, the president will hold a bilateral meeting with Lapid, who took over as caretaker prime minister from Bennett last month and will serve until Israelis go to the polls on Nov. 1. Initially the two leaders will meet privately and then the meeting will be expanded to include their respective teams. Bennett will also join the meetings.

According to a senior Israeli official, Biden and Lapid will sign a statement dubbed the “Jerusalem Declaration,” affirming the strategic partnership between the two allies and pledging, among other things, not to allow Iran to acquire nuclear weapons.

Additionally, the first-ever I2U2 virtual summit along with the leaders of India and the United Arab Emirates will be held. The I2U2 was established in October 2021 following an initiative by the four countries’ foreign ministers as part of the Indian Foreign Minister’s visit to Israel.

Biden will then visit Herzog at his residence, which underwent renovations ahead of the visit and where guests will be served cocktails decorated with Israeli and American flags. There, Biden will be awarded the Presidential Medal of Honor, given to individuals who have made an extraordinary contribution to the State of Israel.

Eyal Shviki, director-general of the Office of the President, said the medal was “the highest honor an Israeli president can bestow.”

“President Biden is a true friend of the State of Israel, and his contributions to Israel’s security have been immense,” Shviki continued, adding, “The president’s visit to the Middle East begins in Israel, and that is an important statement that I am sure will be reflected in the rest of his trip.”

Biden will also meet with opposition leader and former Prime Minister Benjamin Netanyahu on Thursday, as is the protocol for visiting heads of state.

On Thursday evening, the president is slated to attend the opening ceremony of the 21st Maccabiah Games in Jerusalem, along with Herzog and Lapid, and meet with American and Israeli athletes. Roughly 10,000 athletes from 60 countries are competing in these games, dubbed the Jewish Olympics.

In contrast to former President Donald Trump, Biden will not visit the Western Wall in the Old City of Jerusalem, a usual stop for visiting dignitaries, but is expected to tour Augusta Victoria, a Palestinian-run hospital on the eastern side of the city on Friday. Axios reported that Biden will meet with Palestinian civil society activists at the hospital and that he turned down a request by Israeli officials to join him on the tour. Axios also reported that during the trip, Biden will announce $100 million in funding for East Jerusalem hospitals. U.S. Embassy officials would not confirm or deny these reports. A spokesperson for Israel’s Foreign Ministry also declined to comment.

He will then travel to the Palestinian city of Bethlehem in the West Bank, where he will meet with Palestinian Authority President Mahmoud Abbas and other Palestinian leaders at the presidential palace, before spending solitary time at the Church of Nativity, which Christians cite as the birthplace of Jesus, before heading for the airport to fly to Jeddah.

While there are no expectations that the president will make any declarations regarding Israelis and Palestinians kickstarting stagnant peace negotiations, Lapid on Friday called Abbas to offer greetings for the Muslim festival of Eid Al-Adha. It was believed to be the first time an Israeli leader has spoken directly with the Palestinian leader in five years. Lapid made similar calls to Jordan’s King Abdullah II, Egyptian President Abdel Fattah el-Sisi and Turkish President Recep Tayyip Erdoğan over the weekend.

At the start of his cabinet meeting on Sunday, Lapid said this would be “a historic week,” calling Biden “one of the closest friends that Israel has ever had in American politics.” He also said that the main focus of the visit would be on the issue of Iran, and he expressed hope that the president would “carry with him a message of peace and hope,” to the Saudis.

Neri Zilber, a journalist and advisor at the Israeli Policy Forum, told JI that Biden’s visit was a big deal for Israelis who “want to be embraced on a psychological level” by an American president.

“On a personal level, Biden identifies himself as a Zionist, he’s met with every Israeli prime minister going back to Golda Meir and he repeats those things constantly,” noted Zilber. “There is a deep personal connection for Biden, and this will be a major talking point when he’s here on the ground.”

However, Zilber said it was unlikely there would be any “major diplomatic breakthroughs,” such as normalizing ties between Israel and Saudi Arabia.

“It is a very symbolic trip for both sides,” he noted.