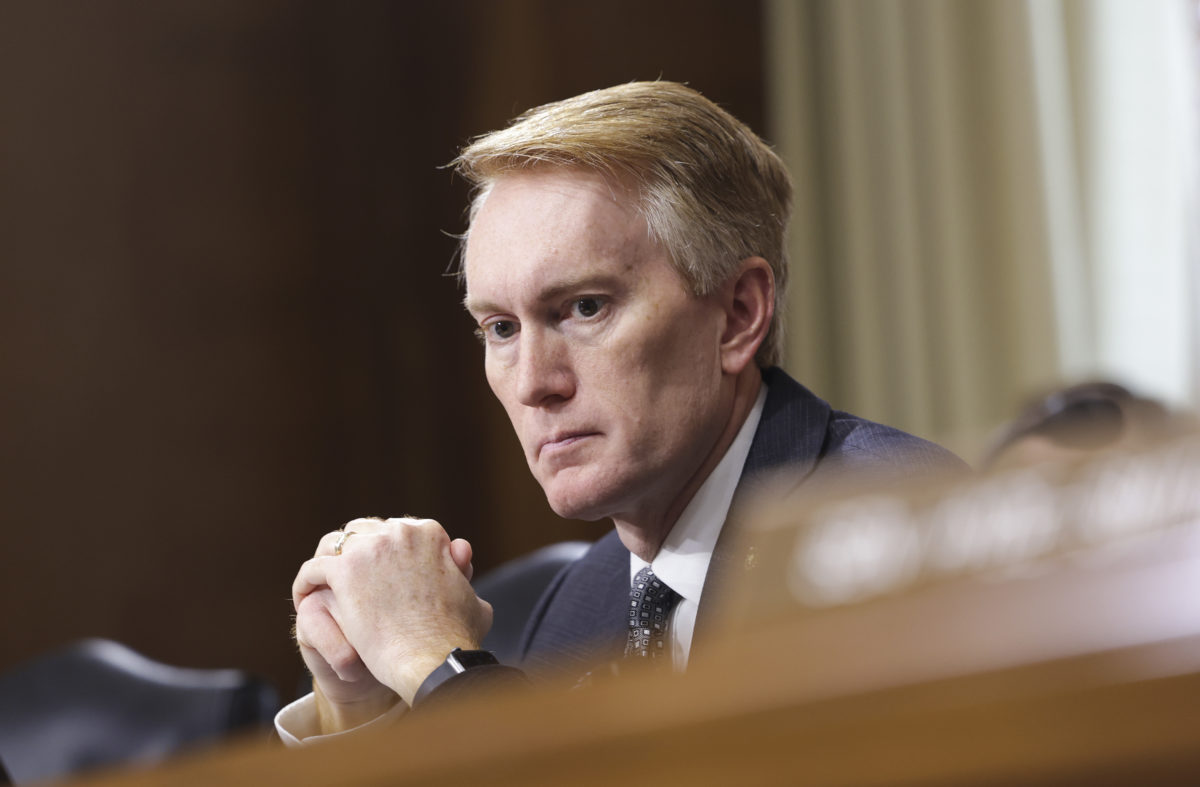 Sen. James Lankford (R-OK) participates in a Senate Energy and Natural Resources Committee mark up, on Capitol Hill on May 03, 2022, in Washington, D.C.

A majority of senators, including 16 Democrats, voted on Wednesday night in favor of a non-binding Senate measure that opposes entering into an Iran deal addressing only the regime’s nuclear program as well as the removal of the Islamic Revolutionary Guard Corps’ terrorism designation. The final vote on the measure was 62 to 33.

Wednesday’s vote came on a motion introduced by Sen. James Lankford (R-OK), as part of the Senate’s consideration of the United States Innovation and Competition Act (USICA) aimed at countering China.

The motion instructs the senators negotiating the final bill with the House to “insist” that the legislation include language requiring any nuclear weapons agreement with Iran to include provisions “addressing the full range of Iran’s destabilizing activities,” including missiles, terrorism and sanctions evasion; does not lift any sanctions on the IRGC; and does not revoke the IRGC’s terror designation.

The Biden administration has sought to rejoin the 2015 nuclear agreement, from which the Trump administration withdrew in 2018. The original deal did not address issues beyond Iran’s nuclear program.

The measure had reportedly become a matter of contention in the Senate, with some Democrats trying to block the vote. Lankford allegedly threatened to block Senate proceedings on the bill unless guaranteed a vote on the measure.

Iran has demanded that the U.S. withdraw the IRGC’s Foreign Terrorist Organization designation. Secretary of State Tony Blinken told Congress last week that the group would have to cease its support for terrorism in order for the designation to be withdrawn, but also argued that the designation is largely ineffectual because other IRGC sanctions would remain in place.

Shortly after the vote, Coons — a close administration ally who has been referred to as President Joe Biden’s “shadow secretary of state” — said in a statement that his vote “does not undermine my continuing support for the administration’s efforts to negotiate an agreement” and that he “maintains an open mind towards any potential outcomes.”

He explained that he voted for the motion “in order to encourage the Biden administration’s negotiations to push for the strongest possible deal that addresses Iran’s nuclear weapons program and many other malign activities.”

Lankford suggested that the measure was pertinent to USICA because Iran exports much of its oil products to China.

“This bill does not address China’s practice of purchasing and stockpiling sanctioned Iranian oil to the black market,” Lankford said in a speech prior to the vote. “The procurement spike by China directly correlated with the spike in terrorist activities by Iran and its proxies in the Middle East… This particular Motion to Instruct goes straight at this illicit activity from Iran that’s facilitating the terror activities.”

Sen. Chris Murphy (D-CT) argued in response that “this motion asks the Senate to endorse” the Trump administration’s Iran policy, which, he said, “was a complete and total failure,” in pursuit of a “mythical comprehensive agreement.”

Lankford’s motion was the second measure on Iran to come up for a vote on Wednesday. Earlier in the day, 86 senators voted in favor of a motion, introduced by Sen. Ted Cruz (R-TX), stating that terrorism-related sanctions on the Central Bank of Iran and the IRGC “are necessary to limit… cooperation” between Iran and China.

The Cruz motion instructs the Senate’s negotiators on the competition bill to “insist” that the final bill include language requiring the administration to report to Congress on cooperation between China and Iran.