A seat at the vice president’s Seder

An inside look at the first Seder held at the Naval Observatory, hosted by Vice President Kamala Harris and Second Gentleman Doug Emhoff 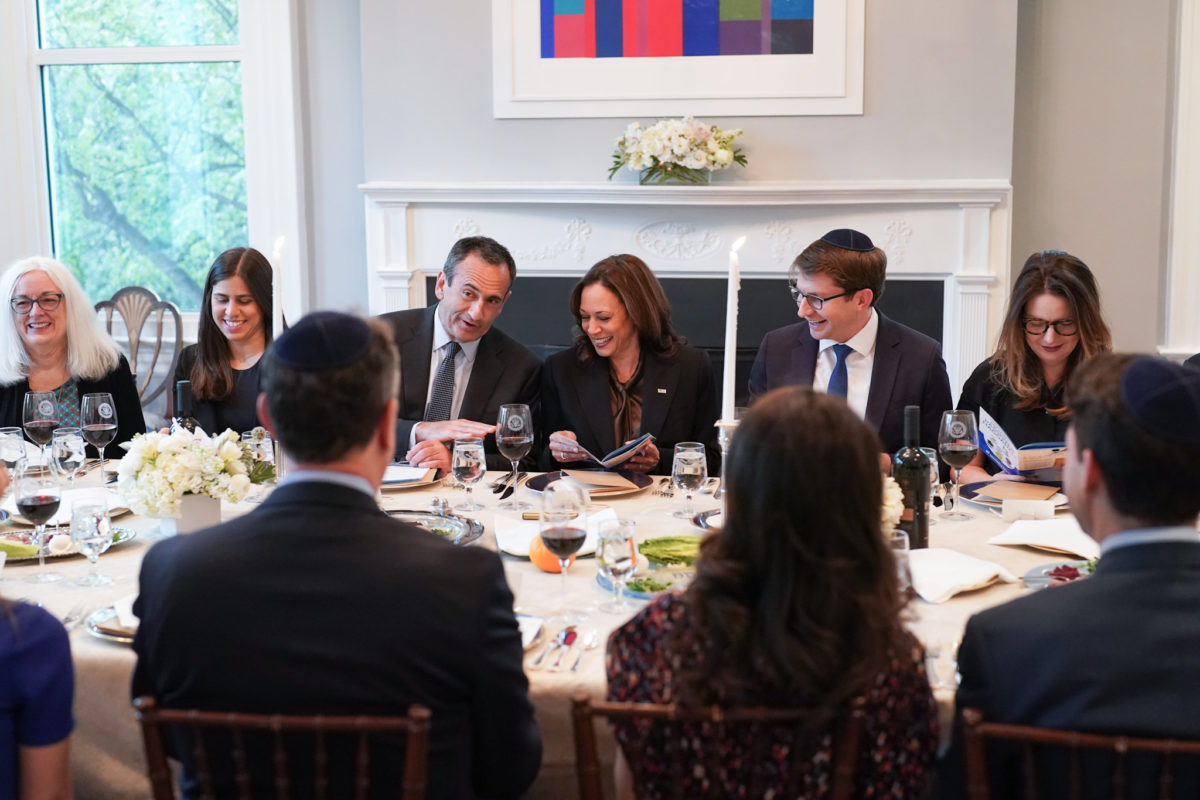 There comes a point in every Passover Seder when someone rises from the table and opens the door to ceremonially welcome in Elijah, the prophet whose arrival is said to mark the arrival of the messiah.

Every Seder except Vice President Kamala Harris’, that is.

“We didn’t open the door for Elijah because we weren’t sure if we were going to be able to with the Secret Service,” recalled one attendee at the Seder, mostly — but not entirely — jokingly. Eighteen people attended the first-ever Seder held at the vice president’s residence at the Naval Observatory.

Harris presided over Friday’s Seder along with her husband, Doug Emhoff, the first Jewish spouse of a vice president. It “looked like Seders that you would recognize in places all across the country,” Herbie Ziskend, senior advisor for communications to Harris, told Jewish Insider on Monday.

The “bubbe-driven” menu, as one guest described it, featured a kosher catered meal that included matzah ball soup, gefilte fish, salmon, brisket, chicken marsala, carrot tzimmes and potato kugel. Attendees followed along in the Maxwell House Haggadah, which was used annually in the Seders hosted by former President Barack Obama, beginning on his 2008 presidential campaign (a tradition that Ziskend had a hand in arranging).

The Seder was co-led by Ziskend and Cynthia Bernstein, Harris’ director of management and administration. The pair initially intended to stick to English, but more Hebrew was incorporated into the readings and the singing at Emhoff’s urging. (And there was a lot of singing — “whenever the spirit called, people would just break out in song,” said Bernstein.)

The evening featured all the usual trappings of the festive Passover meal — singing the Four Questions, searching for the afikomen and telling the story of the Israelites’ exodus from Egypt. The Seder plate on the table also included an orange, a more recent and progressive addition to some Passover tables that is meant to symbolize the inclusion of women in Jewish life.

“At least for us, it symbolizes inclusion, and especially making sure that women’s voices are heard and are provided the same opportunity,” explained Bernstein.

Conversation topics throughout the event, Ziskend and Bernstein shared, included family members of the attendees, and stories of guests’ parents and grandparents who had come to the U.S. as refugees fleeing the Holocaust and others who had served in the U.S. military.

Krupkin and Ziskend’s wife, Arlie, as the two youngest attendees (although both were over 30; staffers’ children were left at home), searched for the afikomen. (Emhoff hid it in the piano.) Both received a gift from a woman-owned business that Harris frequented in California, her home state.

This year’s Seder was not Harris’ first; she and Emhoff had a two-person “COVID Seder” during the pandemic, Emhoff told JI in a recent interview. She kicked off this year’s Seder telling of the story of the Jews’ exodus from enslavement in Egypt, beginning with the line about the Israelites being slaves to Pharaoh in Egypt.

“That was extremely, extremely moving and impactful to have this vice president, who is so many firsts, sharing that story, reading that passage, and really framing how this is a timeless story,” said Bernstein, who as an observant Jew walked the couple of miles to the Naval Observatory from her home. “Yes, it’s about freedom for the Israelites thousands of years ago, but there’s still so many who are working for freedom.”

Both Harris and Emhoff spoke about lessons from the story of the Exodus, including how the transition from oppression to freedom resonates with modern issues. The Seder was meaningful for them as people “who could take the opportunity and spend this important holiday reflecting and being with their colleagues, their teams, and thinking about, How do we make the world a better place in the context of remembering the story of the Exodus?”