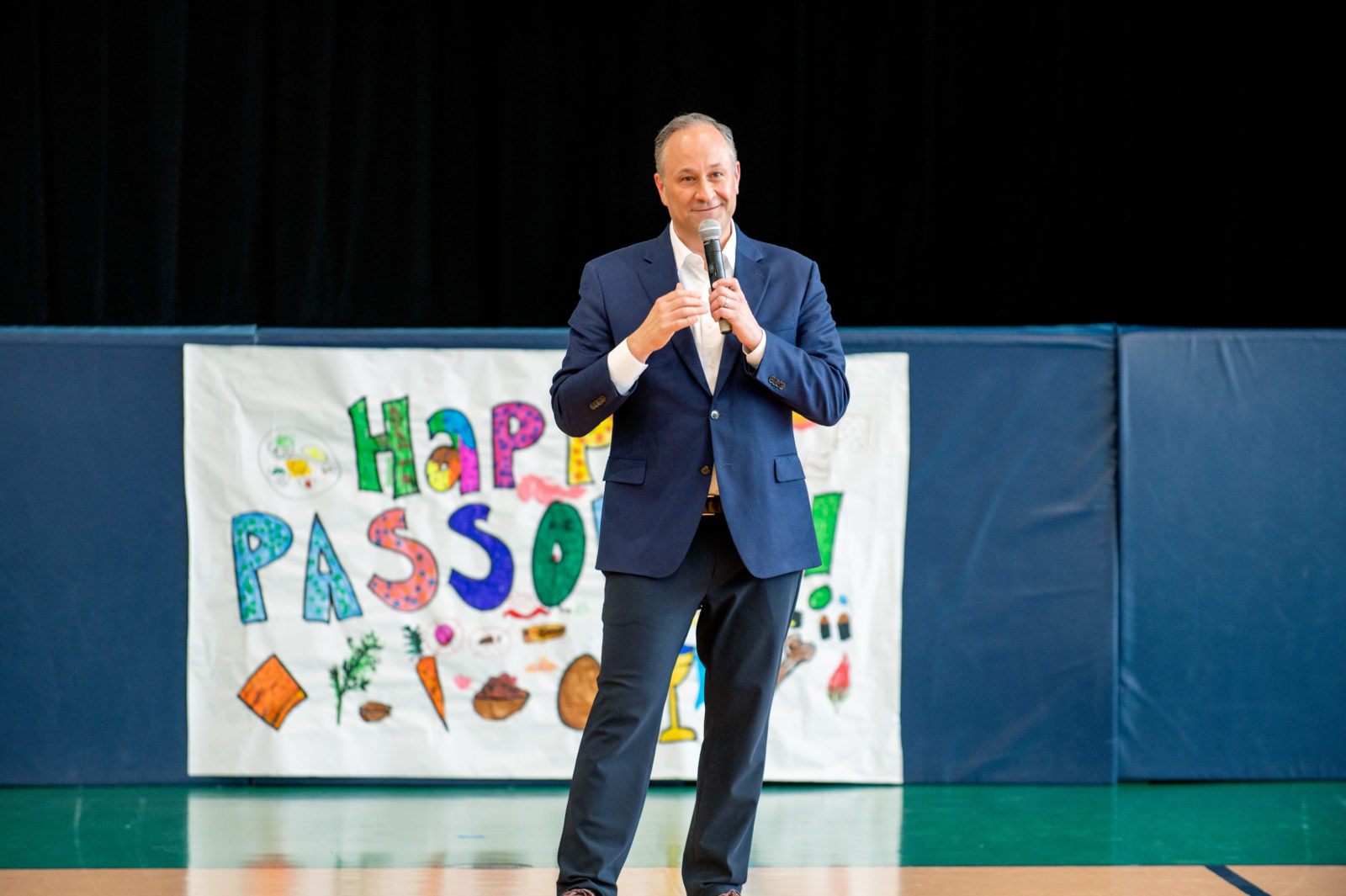 The Second Gentleman made matzah, discussed Torah and spoke about his own Passover experiences at a pre-Passover visit to a Jewish day school in Washington, D.C.

It was an hour before school let out for spring break, and the students at Milton Gottesman Jewish Day School in Washington, D.C., had that contagious last-day-of-school energy. Passover celebrations were taking place throughout the large building in Northwest Washington, and a special guest would soon be joining some of them.

“Passover is actually my favorite holiday,” Emhoff said, earning more cheers and applause from the students, who ranged from pre-K to eighth grade. He recounted his childhood Passovers, first in Brooklyn with his grandmother and her “really dry brisket,” then at his family’s home in New Jersey before they moved to California. “It was just a great way to be with other people and share our shared history,” said Emhoff.

As the first Jewish spouse of a president or vice president, Emhoff has leaned into his Jewish identity since he and Vice President Kamala Harris moved into the Naval Observatory last year. He hung a mezuzah on the Vice President’s residence in the fall, and he and Harris participated in several Hanukkah events in December. But yesterday’s festivities marked his first in-person public celebration of Passover since before the COVID-19 pandemic.

“During COVID, we had our own, like, little COVID Seder, just me and her,” Emhoff said of the vice president in an interview with Jewish Insider following the event. Passover is a holiday they enjoy together: “She loves tradition, and she loves history, and she just loves the celebration and the joy that it brings.” (Harris does not have a favorite Passover dish, but she is “very much a good cook,” Emhoff told JI, adding, “she just makes up what she believes is traditional Jewish food, and she does a great job at it.”)

Emhoff presided over last year’s White House virtual Seder, which brought together thousands of attendees. He plans to make it a tradition; another virtual Seder will take place this evening. (Emhoff said he could not yet share the details of his in-person Passover plans.)

“Still to this day, a year later, [it’s] one of the most impactful things I’ve done, especially as it relates to the Jewish community,” Emhoff said of last year’s virtual ceremony. “People still just come up to me: ‘Are you going to do it again this year? It was so amazing.’”

Emhoff’s afternoon kicked off outside the school, where fourth-grade students were making matzah over a small grill.

“What stage are we at?” Emhoff asked, taking off his jacket on a sunny April day that reached above 80 degrees. “Nonexistent,” one boy said, earning a laugh. Then the students began explaining what went into matzah — how to mix the water and flour so it did not become chametz, or the leavened bread forbidden on Passover — and showing Emhoff how to knead it.

“This is the bread of affliction,” said Etan Weiss, the school’s director of Jewish life. “You have to work for it.” When Emhoff’s matzah was finished baking, he led the students in saying the Motzi blessing, and deemed the matzah “awesome.”

It was Emhoff’s first time making matzah  — doing so is not a common Passover activity, he pointed out — but he quickly listed his favorite ways to enjoy matzah. “Horseradish guy. Gefilte fish on the side. Matzah brei,” said Emhoff.

The next stop on the Milton Passover tour was the school’s beit midrash, where Emhoff participated in a discussion with eighth-grade Talmud students. “I remember so well, going to public middle school, getting on the bus going to Hebrew school twice a week,” recalled Emhoff, “and doing the things that you’re also doing here.”

He sat in front of the class with a seating chart, calling on each of the 15 students to speak about the divrei Torah they had written connecting the themes of Passover to democracy. The first pair of students spoke about the notion of asking questions as central to the Seder experience.

“We were talking about how, like, in democracy it’s really important to ask questions, and each person has to ask questions, because everyone’s involved in the democratic process,” a student named Maya explained.

One exchange really stuck with Emhoff — so much so, he told JI after the discussion, that he plans to bring it up at the White House virtual Seder.

A student named Isaac explained that he and his partner researched falling asleep at the Seder table. “That doesn’t seem like it has much to do with democracy,” Isaac said. But he learned from Jewish teachings that if you fall asleep, you could miss your opportunity to eat from the paschal lamb, “and I think that actually has a lot to do with democracy,” he explained. “Everyone’s voice is heard, I think you have experience with that, but if you fall asleep, you might miss your opportunity so you have to stand up for what you think is right.”

Throughout the discussion, Emhoff drew his own conclusions between the students’ analyses, the Passover story and the Biden administration’s political goals. He condemned the rollback of voting protections and reproductive rights in some states. “People want more rights, not less. And rights are being taken away in certain areas and that’s not — it’s not OK. And it’s on all of us in a democracy to push back,” Emhoff told the students.

The school does not get involved in political matters, and students whose parents work for officials in both political parties are represented in the student body. In late 2020, Ivanka Trump and Jared Kushner moved their kids from Milton to the more religious Melvin J. Berman Hebrew Academy after a spat over the school’s COVID-19 guidelines. (Their names still appear on a wall naming major donors at the school’s entrance.) “We are a pluralistic day school, and because we’re in Washington, D.C., you can imagine that that means all kinds of pluralism,” said Ronit Greenstein, the school’s director of communications.

Later, Emhoff reflected on the eighth-grade discussion in an interview with JI. “When they said, you can’t fall asleep, you can’t even doze, you need to be wide awake to be a participant at the Seder table, but also as a participant in our democracy…It’s just so impactful,” he reflected. “And again, I’m hearing that from an eighth grader.”

As Second Gentleman, Emhoff has traveled the country promoting the priorities of the Biden-Harris administration. But much of his work is not specifically focused on political goals. Food insecurity is a personal interest; he has volunteered with several food kitchens, both in the Washington area and elsewhere.

Working with children also appears to be a particular focus of the Second Gentleman’s. In February, a trip to a Washington high school to learn about a Black history program went awry when a bomb threat required a quick evacuation. Last month, he visited a children’s hospital to speak about youth mental health.

“I’ve learned so much from kids, I really have. It’s just almost the unfiltered truth in a lot of ways,” he told JI, “because they haven’t been exposed to the real life part yet as much, and also they’ve been through COVID, and they’ve almost suffered as much as anybody just from being inside and school and the lack of being with their friends. So it’s a great, almost, focus group, to hear what’s really going on and how they’re feeling.”

He has his own focus group of sorts in his two twentysomething children, Ella and Cole. They both appeared often at campaign events in 2020 and at last year’s Inauguration, but neither has taken a public role related to the administration. Talking to them, Emhoff said, is a way to find out what they care about, but also if they and their friends are even paying attention.

“Unfortunately, with a lot of people who are in their 20s and starting their lives, sometimes they feel, ‘Well, I’ll focus on this when I’m older,’” Emhoff noted. “But I keep saying, No, you gotta — that’s what I said to the eighth graders — you’ve gotta start now. Because you can’t just sit there and complain about things that are happening or let them happen to you if you’re not engaged and you’re not involved.”