Rubio, Romney vote yes on Lipstadt, all other SFRC Republicans vote no

After eight months and numerous delays, Deborah Lipstadt's nomination has advanced out of the Senate Foreign Relations Committee 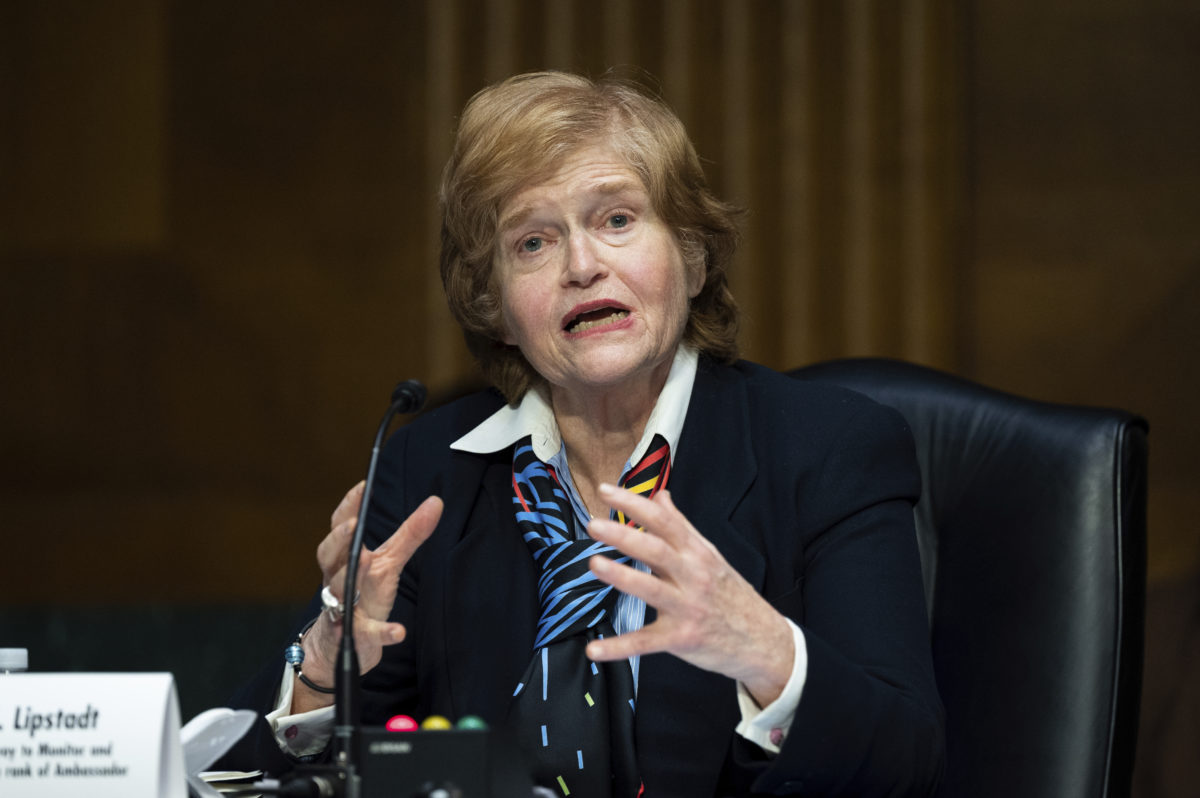 Deborah Lipstadt, nominee to be special envoy to monitor and combat antisemitism, speaking at a hearing of the Senate Foreign Relations committee.

The Senate Foreign Relations Committee voted on Tuesday morning to advance the nomination of Deborah Lipstadt, the Biden administration’s pick to be special envoy to monitor and combat antisemitism, to full Senate consideration, with just two Republicans — Sens. Marco Rubio (R-FL) and Mitt Romney (R-UT) — voting in the affirmative, along with every Democrat on the committee.

The vote comes after a drawn-out process delayed by Senate Republicans’ opposition to Lipstadt. Republicans objected to a tweet she sent criticizing comments by Sen. Ron Johnson (R-WI), who sits on the committee, as “white supremacy/nationalism.” The committee vote itself has been delayed twice in recent weeks, first by a GOP request and then by Democratic absences last week. The vote comes exactly eight months after Jewish Insider first reported that Lipstadt would be nominated.

Johnson had been urging fellow Republicans to vote against Lipstadt, a source familiar with the situation told JI. During Tuesday’s meeting, he reiterated the grievances he expressed at Lipstadt’s confirmation hearing.

“I thought it was interesting when Majority Leader [Chuck] Schumer [D-NY] introduced her and he was talking about antisemitism and how awful it is in terms of the ‘malicious poison,’” Johnson said. “Well, I would argue that Deborah Lipstadt’s postings on social media represent malicious poison. I think a vote for her basically acknowledges that you’re OK with malicious poison as long as it’s directed at somebody you don’t agree with.”

Sen. Ted Cruz (R-TX) said he initially planned to support Lipstadt, calling her “a serious person and an intelligent person” but said he was “troubled” by the Johnson tweet, arguing that it “undermines the effectiveness of this job.”

Committee Ranking Member Jim Risch (R-ID) also reiterated his “real concerns about her judgment,” based on her tweets, but predicted she will be confirmed.

Sens. Bob Menendez (D-NJ) and Ben Cardin (D-MD) pushed back, pointing to Lipstadt’s subject-area expertise and reputation, and argued that her record on the issue has been nonpartisan.

“I can tell you that Deborah Lipstadt is the leader in this country on antisemitism. She has a global reputation,” Cardin said. “Her reputation and credibility within the stakeholders who are fighting antisemitism in the United States and around the world is without question. She is the most qualified individual to be appointed to this position.”

Sen. Rob Portman (R-OH) told Lipstadt during her confirmation that “with your background, I think you’ll fit [the position] well,” that she is “well-qualified to take on that task, including the international task” and that his constituents had expressed support for her. He ultimately voted against her.

Given the strong Republican opposition in the Foreign Relations Committee, Democratic leadership will likely have to hold floor votes on her nomination.

But with confirmation votes requiring only a simple majority and at least three Republican senators backing her — Sen. James Lankford (R-OK), who co-chairs the Senate’s antisemitism task force, submitted a letter to the committee supporting Lipstadt — she should have the votes necessary to be confirmed.

A spokesperson for Schumer did not immediately say when he might move to set up the necessary votes on Lipstadt.

The SFRC vote was praised by a variety of Jewish organizations — which had joined together to urge the Senate to move Lipstadt’s nomination forward — and by congressional Democrats who have been calling for action on the nomination.

The committee also voted for the second time to advance Barbara Leaf’s nomination to be assistant secretary of state for Near Eastern Affairs, with Romney, Portman and Sen. Rand Paul (R-KY) joining Democrats in voting for Leaf, who currently works for the National Security Council. The committee had advanced Leaf’s nomination in November 2021, but needed to vote again in the new year.