Leaf, the former ambassador to the UAE, has been vocal on recent developments in the region 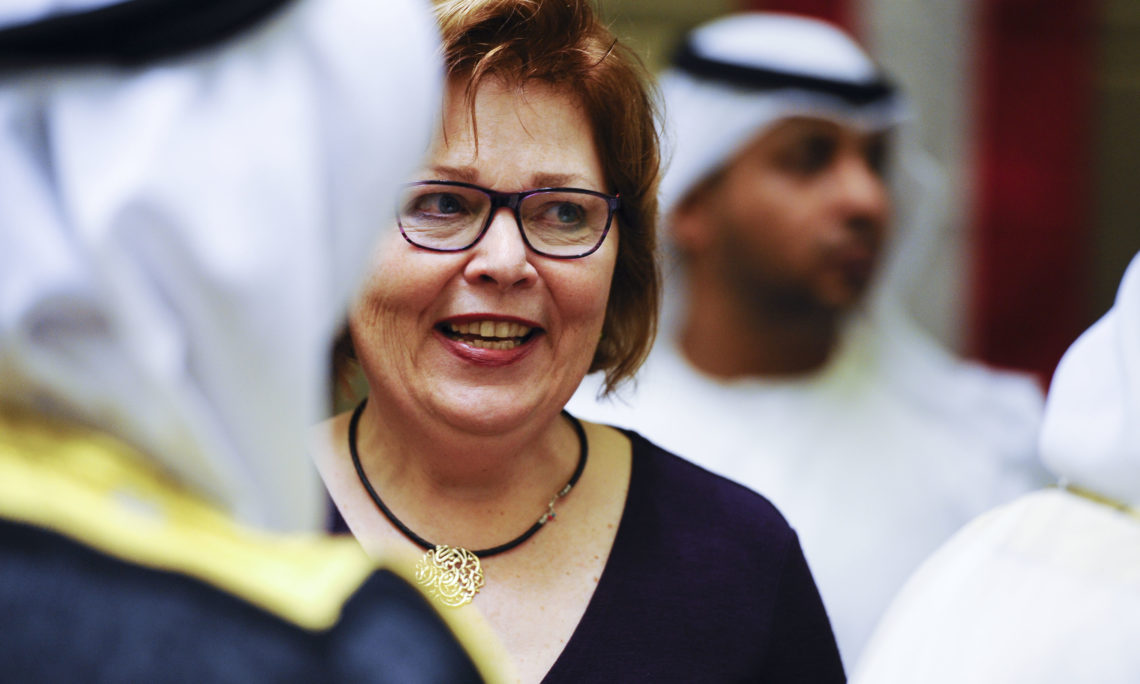 Like so much about the Trump administration, its Middle East policy sought to disrupt conventional wisdom, and de-couple the Israeli-Palestinian question from Israel’s warming relations with the wider Arab world.

Barbara Leaf, who will reportedly join President-elect Joe Biden’s Middle East team at the National Security Council, believes the new administration will look to repair relations with the Palestinians in the wake of the historic Abraham Accords, which normalized relations between Israel, Bahrain and the United Arab Emirates.

Leaf, a fellow at The Washington Institute for Near East Policy, has tempered her optimism for progress on Israeli-Palestinian peace talks during the Biden administration. In late November, she explained to JMORE, a Jewish publication in Baltimore, “The Biden administration is not intending to launch into any kind of full-scale engagement on a peace process but will look to knit up relations with the Palestinian community and its leadership. That will be a good starting place.”

She added that the Trump administration’s policies have not been productive to the cause of peace.

“I would have liked to have seen the move on the [U.S. Embassy to Jerusalem] done within a wider set of steps — not even necessarily a fully-defined peace negotiation/effort — that would have signaled a commitment by the U.S. administration to seeing things through to a two-state outcome,” Leaf commented to JMORE.

Leaf has also downplayed the larger implications of the Accords, arguing that the Trump administration does not deserve much credit for the United Arab Emirates deal. She explained to JMORE that she believes the UAE-Israel peace talks were motivated by the then-upcoming U.S. presidential election, rather than the Trump administration’s broader Middle East policy.

“The Trump peace plan had not, in fact, moved things in the region,” she said. “I suspect the U.S. presidential elections had as much to do with the shift to normalization as anything — the UAE desiring to position itself well in either outcome, and the Trump administration hoping to notch a few foreign policy wins.”

In the Biden administration, Leaf may find herself at odds with congressional Democrats over the issue of arms sales to the UAE. Senate Democrats voted almost unanimously to block the $23 billion sale of F-35 fighter jets, drones and other munitions last month.

Leaf told Vox in December that Israel’s decision to drop its objection to the sale indicated that the deal does not pose serious concerns for the Jewish state’s qualitative military edge.

“It’s now more about the foreign policy dimensions of the proposed sale,” Leaf said of the arms sales tied into the Abraham Accords. “This won’t change the military balance in the Middle East.”

In August, Leaf emphasized that the “alliance [between Israel and the UAE] will not significantly shift the balance of power in the region, although Tehran will monitor closely the direction of Emirati-Israeli intelligence and defense cooperation.”

In the October JCRC talk, Leaf encouraged the next administration to take its time in addressing rapprochement with Iran.

“Let them just sit and think about where Washington will end up,” she said, referring to Iranian leaders. “Consult deeply and thoroughly with those countries… who feel themselves very much on the front lines of Iran’s disruptive behavior, and think through a process that is not wholly interlocking,” she said. “You’ve got to have Tehran understand that it doesn’t just go back to [2015 Joint Comprehensive Plan of Action], [that] all’s forgiven,” she said, referring to the Iran nuclear deal.

Leaf said in the JCRC appearance that relying on “bumper stickers” foreign policy, including demanding that Iran leave Syria and Iraq, will not be effective. Leaf instead encouraged the incoming Biden administration to set benchmarks for different sets of talks on different issues, and to pursue them “in concert with each other.”

This would allow the next administration to avoid the Obama administration’s perceived failure to tackle additional issues after the JCPOA, which caused the Gulf states to ditch their support for the Iran deal.

Ron Halber, the executive director of the JCRC of Greater Washington, who moderated the panel with Leaf, told Jewish Insider he was impressed by her during their conversation.

“She’s clearly an experienced Middle East hand… She provided a very cogent and comprehensive analysis,” Halber said. “It makes perfect sense based on her background, and the variety of her postings, and where the president-[elect] stands philosophically that she would be part of the team.”

“No one who’s going to voluntarily work at The Washington Institute of Near East Policy is going to have negative feelings toward Israel,” Halber noted.