The event was the first of two in the region — the other will be held in Abu Dhabi — hosted by the U.S. Embassy and the U.S. Holocaust Memorial Museum 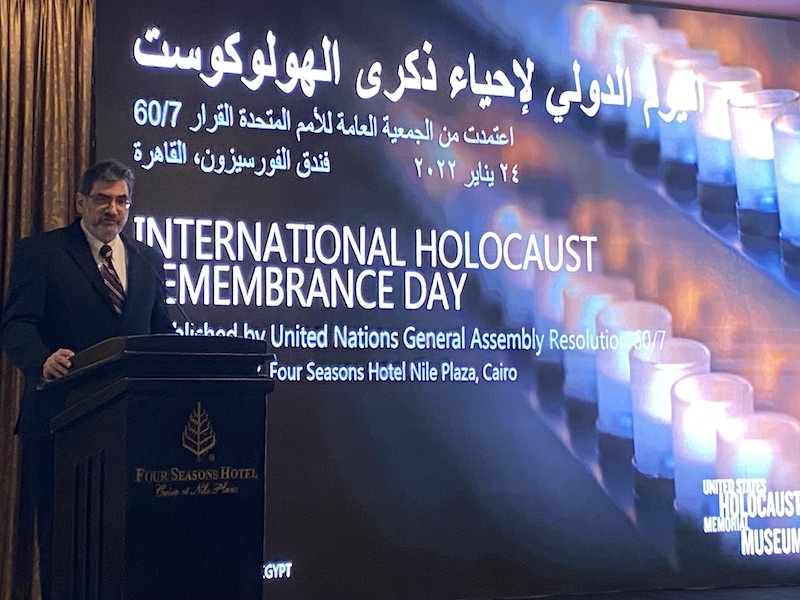 Egyptian officials, American scholars and foreign diplomats gathered on Monday at a luxury hotel on the banks of the Nile to commemorate International Holocaust Remembrance Day, the first time such an event has ever been held in Egypt.

The gathering was hosted by the U.S. Embassy in Egypt and the U.S. Holocaust Memorial Museum (USHMM) in Washington, D.C. A similar event will take place later this week in Abu Dhabi, where Noura al Kaabi, the United Arab Emirates’ culture minister, is slated to speak. (International Holocaust Remembrance Day is commemorated on Jan. 27, the day the Auschwitz concentration camp was liberated.) Plans for additional events in Riyadh and Dubai were scrapped because of the COVID-19 pandemic.

“It was symbolically, I think, very important that we were able to do this in Egypt,” Robert Satloff, executive director of The Washington Institute for Near East Policy and a speaker at the event, told Jewish Insider from Cairo. “I was just delighted with what happened today and the fact that this occurred in the largest, most populous, trendsetting Arab state.”

The event is the latest symbol of changing attitudes in the Middle East in the wake of the Abraham Accords signed in September 2020. While Egypt was the first Arab nation to sign a peace treaty with Israel, in 1978, the Camp David Accords did not lead to a significant shift in Egyptian attitudes toward Israelis and Jews.

“There is a peace treaty between Egypt and Israel, but that peace has always been a cold peace,” said Mina Abdelmalak, who conducts Arabic outreach for the USHMM and was born and raised in Egypt. “It was never translated into the mainstream, people-to-people level. It was mostly government-to-government. So to be able to push this a little bit, that is significant.”

Abdelmalak and Tad Stahnke, the museum’s international outreach director, spoke at the event, as did Jonathan R. Cohen, the U.S. ambassador to Egypt, and Magda Haroun, the head of Egypt’s Jewish community. Satloff took questions from the audience following a screening of “Among the Righteous,” a documentary he produced about Arabs who helped protect and save Jews during the Holocaust.

“If you would have told me a few years ago that such an event would take place in Cairo, I would laugh,” Abdelmalak told JI on Monday. “Until this morning, it wouldn’t have completely surprised me if the government of Egypt would say, ‘Due to security reasons, this is not going to happen.’”

“This wasn’t hidden away in some obscure corner of some small, out-of-the-way building. This was right smack in the middle of Cairo. This was an event to which diplomats from around the world — Middle East diplomats, European diplomats and ambassadors — were there,” explained Satloff.

The Abraham Accords “raised the bar for everyone,” Satloff said, including the “first-generation peacemakers” — Egypt and Jordan. But there were other factors at play, too: Egypt, like Israel, sees Iran as a foe. Last week, Egypt’s permanent representative to the United Nations gave a speech in Arabic on behalf of the Arab Group, condemning Holocaust denial as the United Nations General Assembly debated and then passed a resolution on the subject. The only country to vote against the resolution was Iran.

Satloff attributed the attitude change at least in part to Israel’s new leadership. With the “post-[Benjamin] Netanyahu enhancement of bilateral relations, it’s easier to be more public about it,” added Satloff. Domestically in Egypt, there is also “more consideration of the issues of religious minorities, countering extremism, interfaith relations. I think all these come together to make the environment more receptive and accessible to the type of event that we had today.”

The public event marked an important milestone for the USHMM, but came only after the USHMM’s efforts to build relationships in Arabic-speaking countries over many years.

“We have for the past several years been working to cultivate partnerships across the Middle East and North Africa to develop educational programming to reach young adults and emerging leaders in those countries with accurate and relevant information about the Holocaust,” said Stahnke. Education efforts have begun to have an effect in Morocco and Tunisia, he added. But yesterday’s event in Egypt, the most populous Arab country with nearly 100 million people, marked the most visible success.

Outright Holocaust denial is rarer than it used to be, Satloff said, explaining that it has been replaced by “relativism.” He defined the concept as “the idea that bad stuff happened, but bad stuff happens all the time, that sort of thing. Or: 600, 60,000, 600,000, 6 million, what’s the difference?”

Holocaust distortion has found a home in Egypt in the past because of the overall sentiment in the country regarding the Israeli-Palestinian conflict. Abdelmalak said the result is that “the Holocaust has been weaponized” in Egypt.

“It takes a lot of work with civil society to ensure that we push back against years and years of Holocaust denial being established in that part of the world,” Abdelmalak added. Attendees at the event also reflected upon Egypt’s own treatment of its Jewish community, including in the 1940s, when some Arab leaders spread Nazi propaganda and pogroms racked Cairo.

“I think everybody left with the sense that it was worthwhile and valuable,” said Satloff, “and perhaps just the first of many, which itself is a very important milestone.”