At New York event, talk of tolerance and tangible peace dividends between Israelis and Emirates 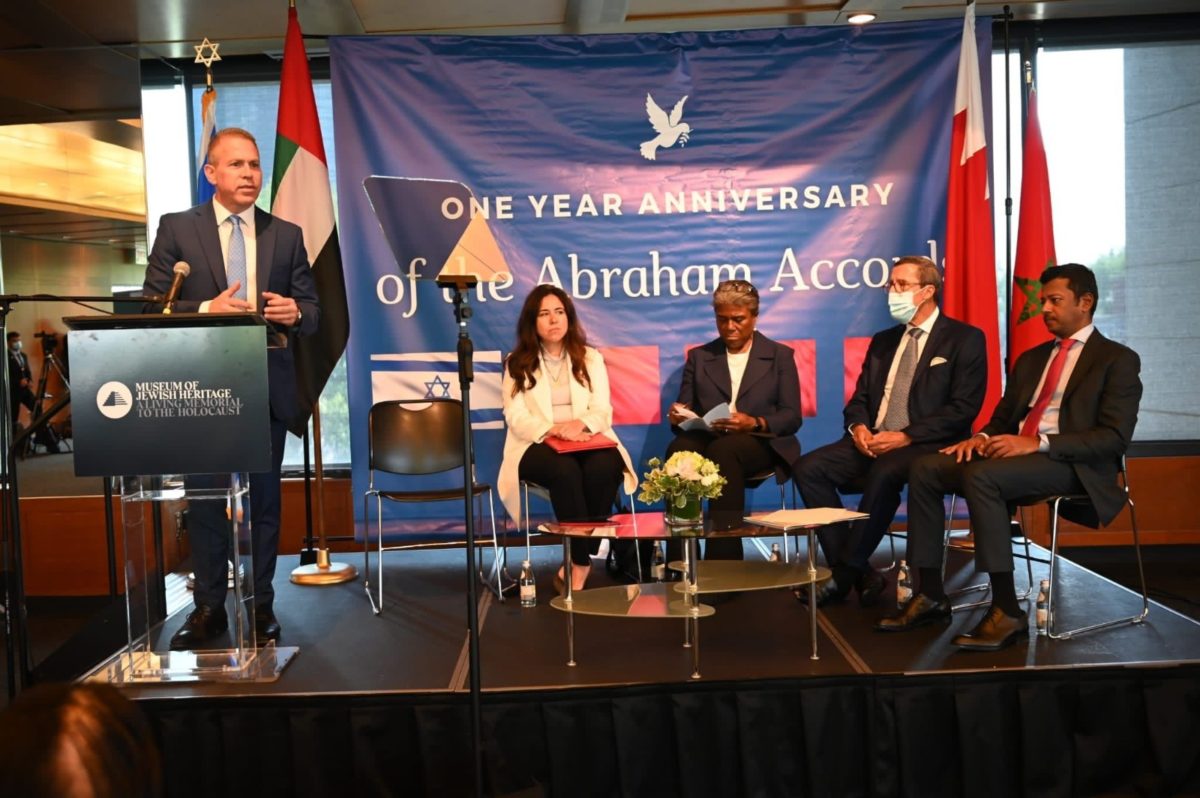 United Nations ambassadors from the U.S., Israel, the United Arab Emirates, Morocco and Bahrain gathered at the Museum of Jewish Heritage in Lower Manhattan in New York City on Monday for an event commemorating the first anniversary of the signing of the Abraham Accords.

Addressing the roughly 70 attendees, mostly ambassadors representing other countries at the United Nations and Jewish communal leaders, Israel’s Ambassador to the U.N. Gilad Erdan called the agreement “the best representation of practicing tolerance and living in peace with our neighbors.”

Erdan, who organized the event, added that “both Jews and Arabs will grow up in a fundamentally new region, an atmosphere in which peace and friendship between Israel and its neighbors will feel inevitable, in which tolerance and coexistence are not just ideas, but the reality they experience every day.”

The expanding Jewish community in the UAE was highlighted by Emirati Ambassador to the U.N. Lana Nusseibeh. “The flourishing of the Jewish community in the UAE, the first new Jewish community established in an Arab country in centuries, is just one proof of how the three Abrahamic religions can live and work side by side in our region,” she said, adding that she was hopeful that normalization between Israelis and Emiratis could facilitate progress in the Israeli-Palestinian peace process.

“As we face this multitude of shared challenges in our region, it’s also our hope that the optimism the Accords generate for the youth of our region can also lead to a lasting agreement between the Palestinians and the Israelis, who also deserve to live in peace and security,” she noted.

U.S. Ambassador to the U.N. Linda Thomas-Greenfield said she was hopeful that relationships formed through the Abraham Accords would be reflected in Turtle Bay. “I’m also determined to explore how we can translate these agreements into progress within the U.N. system,” she said. “Events like this point us in that right direction.”

The U.S. is one of 16 countries boycotting an upcoming conference to commemorate the 20th anniversary of a U.N. anti-racism conference in Durban, South Africa, that singled out Israel as a racist nation.

Speakers at Monday’s event in New York highlighted the speed with which the agreements spurred economic and cultural advancements. Citing the opening of Israeli embassies in Bahrain and the UAE, and the appointment of ambassadors from those countries to Israel, Thomas-Greenfield noted that “what is most remarkable is that in the past year, we’ve gone from ink on the page to concrete improvements between countries.”