With progressives backing Nina Turner, the primary will underscore the deep schisms in the party as Israel emerging as a key issue 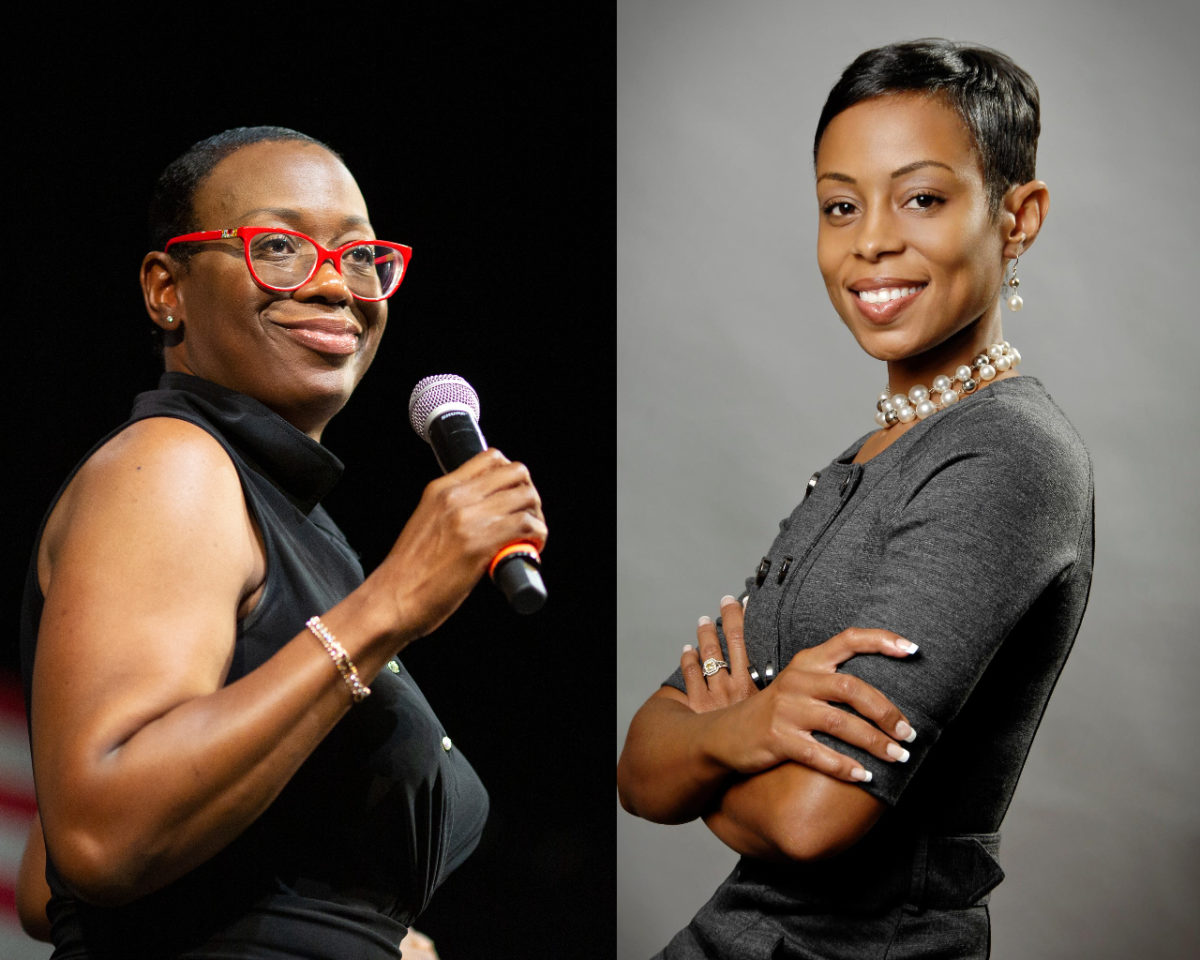 The group of lawmakers — including Reps. Josh Gottheimer (D-NJ), Ted Deutch (D-FL), David Trone (D-MD) and Brad Schneider (D-IL) — will each announce this week that they are throwing their support behind Brown with just over a month remaining until the Democratic primary on August 3, according to a spokesperson for Brown’s campaign.

The race, in which Israel has figured prominently, is viewed as a test of the relative strengths of the moderate and progressive wings of the Democratic Party well ahead of the 2022 midterms.

The new slate of endorsements, coming in the final weeks of the race, represent a significant boost for Brown, a moderate Democrat who is widely viewed as a top contender in the crowded field of more than a dozen candidates.

“I am proud to endorse Shontel Brown for Congress, a dynamic leader who is a strong and passionate voice for our Democratic values,” Gottheimer explained to Jewish Insider on Tuesday. “She has a distinguished record of bringing people together and delivering for her community, especially during COVID. That will make her an especially valuable partner in Congress as we recover from the pandemic and move our country forward.”

And on Tuesday, Jim Clyburn (D-SC), the House majority whip whose pivotal endorsement of Joe Biden helped swing the presidential primaries in his favor last election cycle, announced that he was endorsing Brown as well.

Such support strongly indicates that the Democratic establishment is coalescing around Brown as she competes to succeed former Rep. Marcia Fudge (D-OH), who in March vacated her seat to become secretary of housing and urban development. Brown, a Fudge protegé, casts herself as a center-left consensus builder who is eager to advance the policy objectives of the Biden administration in Congress — a message that appears to have resonated with her supporters.

“Shontel Brown knows what it means to work hard — as a member of the Cuyahoga County Council, she’s delivered again and again on behalf of her constituents,” Trone, who represents Maryland’s 6th Congressional District, told JI. “I know Shontel will come to Washington ready to work with our House majority and the Biden administration to deliver for Northeast Ohio and the American people.”

In recent months, however, Brown has struggled to keep pace with her main primary opponent, Nina Turner, a well-known progressive in the district thanks to her tenure as an Ohio state senator from 2008 to 2014 representing parts of the Cleveland metropolitan area. During the 2020 presidential election, Turner worked for Sen. Bernie Sanders (I-VT) as a national campaign co-chair and previously led Our Revolution, his left-wing political group.

Turner has led the pack in fundraising, raking in millions of dollars, and recent internal polling from Turner’s campaign put her in first place with a commanding lead over Brown.

Whoever wins the Democratic primary will be all but assured a seat in Congress next term given the partisan makeup of the solidly blue district, which includes a large portion of Cleveland as well as a sliver of Akron.

The race, in many ways, has come to embody a growing rift between moderates and progressives — particularly on Israel. Brown, who visited Israel on a trip sponsored by the AIPAC-affiliated American Israel Education Foundation, identifies as a strong supporter of the Jewish state.

Turner, by contrast, supports conditioning foreign aid to Israel and hasn’t shied away from voicing criticism of the Jewish state.

But the recent conflict between Israel and Hamas has underscored the candidates’ divergent views. In comments to JI amid the violence last month, Brown condemned “Hamas’s massive rocket attacks” while emphasizing Israel’s “right to defend its citizens.”

Turner, meanwhile, took a different approach, positioning herself firmly on the side of the Palestinians. “Solidarity is a verb,” she said in a briefly worded Twitter missive, adding a raised-fist emoji for emphasis.

Her message was included above a separate tweet from the far-left Jewish group IfNotNow. “NOW: American Jews are joining with Palestinians and others in front of the State Department to say #SaveSheikhJarrah and #EndApartheid,” the group wrote.

That Turner had amplified an accusation of Israeli apartheid was controversial in the district, which is home to a sizable and politically active Jewish population.

“By promoting the attack that Israel engages in ‘apartheid,’ Nina Turner does nothing to advance ‘solidarity’ and only furthers division,” Rob Zimmerman, a Shaker Heights city councilmember who knows Turner from her time as an Ohio state senator, told JI at the time. “Her views are uninformed and out of step with the Jewish community she wishes to represent.”

Turner’s approach to the Israeli-Palestinian conflict is also a source of concern among pro-Israel advocates nationwide, who are aggressively rallying behind Brown as she seeks to gain ground in the competitive primary. Pro-Israel America, a bipartisan advocacy group, and Democratic Majority for Israel (DMFI) have both endorsed her.

On Wednesday, DMFI’s political action committee will release its first ad in Cleveland’s media market, according to a spokesperson for the group. The 30-second spot, to be distributed on broadcast and cable TV, will highlight the councilwoman’s accomplishments in the district. The spokesperson did not respond to an inquiry about the cost of the ad buy.

“Shontel Brown or Nina Turner?” the ad’s narrator says. “Who can we trust to deliver on President Biden’s agenda? Shontel Brown: a proven leader who will work with Biden and Harris to get results. Brown made history as the first Black woman to lead the county Democratic Party. She added over a hundred beds to our health center, caring for the most vulnerable. Shontel Brown: For Biden. For us.”

The ad makes no mention of Middle East foreign policy, but in an email to JI, Mark Mellman, who chairs DMFI PAC, commended what he views as Brown’s strong pro-Israel credentials.

“Councilwoman Brown is an effective and experienced community leader who’ll be a tireless advocate for her district,” he said. “She’ll work closely with the Biden-Harris administration and support Speaker Pelosi in advancing the Democratic agenda, which includes strong support for the U.S.-Israel relationship. When 4,500 rockets rained down on Israel last month, Councilwoman Brown called for Hamas’s rocket attacks to stop and voiced support for our ally.”

Turner, on the other hand, “has strong anti-Israel positions,” charged Mellman, a longtime Democratic pollster.

The group of four Democratic representatives backing Brown this week have no doubt been encouraged by her support for Israel, which has been a subject of intense debate within the House.

On her campaign website, Brown makes clear that she will be a friend to Israel, showcasing a series of glowing testimonials from pro-Israel activists.

Trone, a co-founder of Total Wine & More — which he says is the largest retailer of Israeli wine in the U.S. — has established a reputation for himself as a vehement critic of the BDS movement. He has also been an AIPAC “minyan” donor, which requires a minimum annual gift of $100,000, in the past.

Just a few weeks ago, Deutch, Gottheimer and Schneider — all of whom are Jewish — spoke out against Omar, accusing their fellow Democrat of likening the U.S. and Israel to Hamas and the Taliban in social media comments.

In a Tuesday interview on CNN, Omar was asked if she regretted her remarks, which were accused of being antisemitic. “I don’t,” she said.

In a statement, Deutch emphasized that he was eager to see another pro-Israel Democrat enter his party’s ranks next term. “In Congress, Shontel will work to strengthen the U.S.-Israel relationship and advance Israel’s security,” the Florida congressman told JI. “Shontel will promote security in the Middle East, work to prevent Iran from acquiring a nuclear weapon and fight efforts to delegitimize Israel on the world stage.”

Schneider, for his part, spoke more broadly of his support for Brown. “Job number one for lawmakers is to ensure everyone has the opportunity to earn a good life in America,” he told JI. “Getting that job done requires bold, pragmatic and collaborative leadership. That’s Shontel Brown.”

“I am honored to have the backing of these incredible members of Congress,” Brown said in a statement to JI. “Today, Jewish Americans are increasingly the victims of hate crimes and violence — and in office, I will stand with the Jewish community against these attacks. In Congress, I will work to build a brighter, stronger union for all of us.”