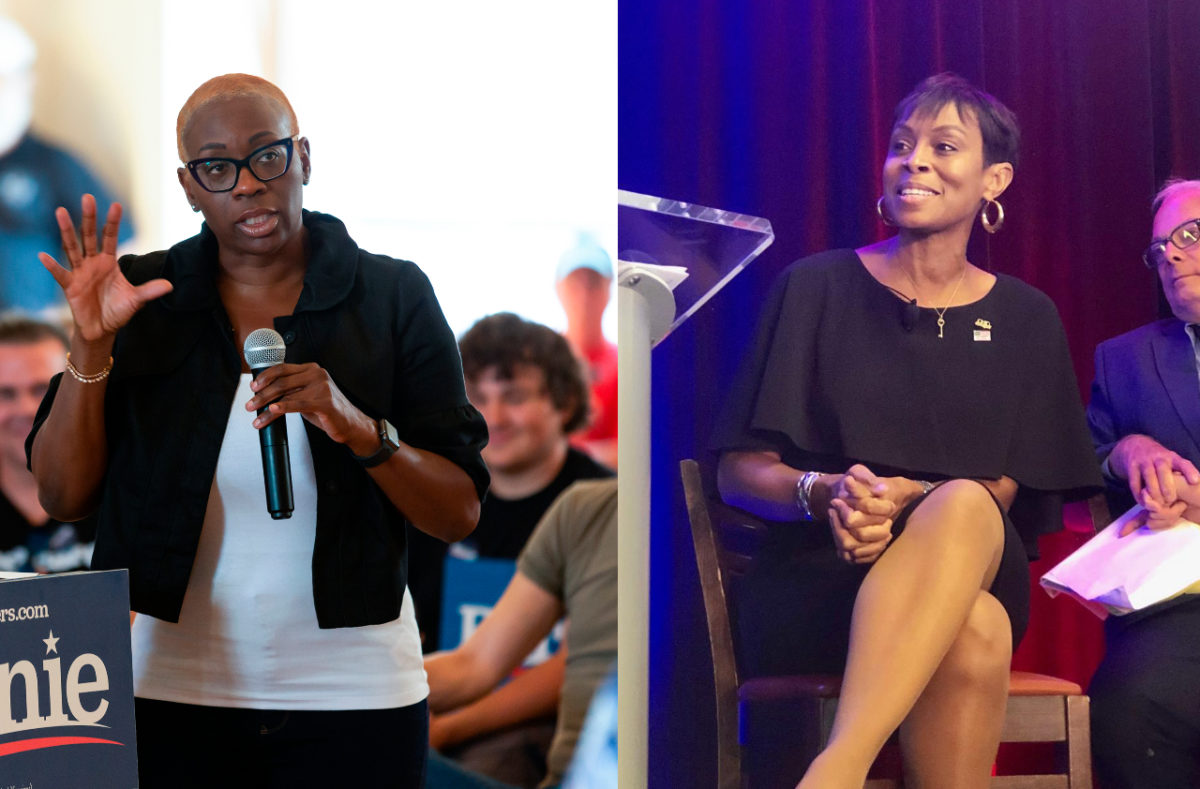 As the open-seat race in Ohio’s 11th congressional district heats up, two candidates with some opposing policy views have emerged as the leading contenders to succeed outgoing Rep. Marcia Fudge (D-OH), who is poised to become the next secretary of housing and urban development. Nina Turner, a Bernie Sanders acolyte, vows to join the Squad’s ever-expanding ranks, while Shontel Brown, a Fudge protegé who serves as a Cuyahoga County councilwoman and party chair, claims that her affinities lie with establishment Democrats.

Perhaps nowhere are their differences more apparent, however, than on Israel — an issue that has increasingly come to underscore a growing rift between moderates and progressives within the party. Brown, who toured Israel in 2018 with an AIPAC-affiliated group, casts herself as a strong ally of the Jewish state, extolling its “bustling democracy” in an interview with Jewish Insider earlier this month. Turner, by contrast, believes the U.S. should condition aid to Israel and declines to reveal her stance on the Boycott, Divestment and Sanctions movement.

In questionnaires recently solicited by JI, the candidates expanded on their foreign policy views as they relate to the Israeli-Palestinian conflict, the Iran nuclear deal and the Middle East more broadly.

While Turner, 53, makes clear that she supports conditioning aid, the former Cleveland city councilwoman and Ohio state senator clarifies that she is still in favor of providing foreign assistance to Israel — albeit with some caveats.

“I support having honest conversations about our government’s role in supporting human rights and civil rights at home and abroad,” Turner said in the questionnaire. “I think our foreign policy should be aligned with our values domestically. That’s why I support assistance for Israel for the legitimate security threats it faces. I also support continued humanitarian aid to the Palestinians and was glad to see the Biden administration reinstate that aid.”

For Turner, this approach isn’t limited to Israel, a country she is open to visiting. “I have been alarmed by our government’s military aid to Saudi Arabia and Egypt,” she told JI. “We should condition our aid to align with significant advances in human rights in both countries.”

This position, she believes, is consistent with past administrations that have used aid as leverage to advance American values abroad. “When it comes to Israel-Palestine, this was something that President [Ronald] Reagan and President George H.W. Bush also understood,” Turner wrote. “I don’t believe any taxpayer money should be going toward entrenching the occupation of the Palestinian territories, settlement expansion, the detention of children or annexation.”

Brown, on the other hand, unequivocally endorses the 10-year memorandum of understanding negotiated by the Obama administration, which provides $3.8 billion in annual assistance to Israel through 2028. “I oppose conditioning our aid to Israel for specific results,” Brown said in her questionnaire, arguing that the U.S. and Israel “have a deep, special, and unbreakable bond based on shared principles and values.”

“We benefit from our relationship with Israel in countless ways,” Brown added. “For instance, American investment in Israel’s Iron Dome system has saved countless Israeli lives and is now deployed to protect our own U.S. service members. In addition, Israel’s expertise in renewable energy, water resource management and environmental security also make it a valuable partner for the United States.”

Brown singled out the BDS movement for ridicule, charging that it “uses antisemitic rhetoric and arguments to weaken, isolate and delegitimize Israel.”

Though the election date has yet to be scheduled, pro-Israel groups are already beginning to rally around Brown as she lags behind Turner in fundraising. In the past week, both Pro-Israel America and Democratic Majority for Israel announced that they were endorsing the 45-year-old first-time congressional candidate. J Street, which recently began meeting with candidates in the race, and the Jewish Democratic Council of America, which is in the process of setting up a candidate forum, have yet to make endorsements.

Despite their disagreements, Brown and Turner were aligned on some topics, including support for a two-state solution to the Israeli-Palestinian conflict — a standard view among both Democrats and Republicans.

“I’ve always supported a two-state solution because it respects both people’s right to self-determination and to live in peace and security,” Turner averred. “I am a person who stands for justice, human rights and equality for every single person. Security and justice for Israelis and security and justice for Palestinians are two sides of the same coin — you don’t get one without the other. Both are equal people in God’s eyes, and both deserve the same.”

Brown agreed. “Peace must be negotiated between the two parties and they must be invested in its success,” she said.

“The plan eschewed decades of good-faith leadership by bipartisan U.S. administrations to work with Israelis and Palestinians toward a two-state solution,” Turner said. “Instead, the plan gave a green light to far-right forces in Israel and toward annexing large swaths of the West Bank.”

According to Brown, the plan “was destined to fail because a durable resolution cannot be imposed on the Israelis and Palestinians.”

Brown and Turner also both favor reentering the Iran nuclear deal, which was abrogated by Trump in 2018 and is known formally as the Joint Comprehensive Plan of Action (JCPOA).

“I support President Biden’s efforts to get a ‘longer and stronger’ nuclear agreement with Iran,” Brown said, adding that the deal was not without its flaws. “In Congress, I will be following his efforts closely and will encourage his administration to reach a deal that addresses the shortcomings of the JCPOA, including its failure to address Iran’s ballistic missile program or Iran’s support for regional terrorist proxies like Hezbollah and Hamas.”

Turner was more enthusiastic, characterizing the deal as a “tremendous foreign policy accomplishment by the Obama administration that successfully prevented Iran from developing nuclear weapons.”

“Once we’ve reentered the agreement and begun to reestablish credibility with our partners abroad,” she said, “we should build upon the JCPOA and continue to use a diplomacy-first approach to curb Iran’s threatening behavior.”

Both candidates addressed rising antisemitism in the U.S. — an issue that is no doubt of particular concern to the district’s sizable Jewish community, the largest in the state. “Hate crimes undermine our democracy and must be rooted out,” said Brown, who argues for “aggressively” addressing white nationalism and investing in Holocaust education, among other things.

“For the past four years, the Department of Justice has not taken white supremacist violence and extremism seriously,” Turner told JI, “and I’m looking forward to working with the Biden administration to change that. We need to call out hate wherever we see it, whether that is antisemitism, racism, Islamophobia or any form of senseless discrimination.”

JI also solicited questionnaires from the other candidates in the Democratic primary: Shirley Smith and Jeff Johnson, who are former Ohio state senators, and John Barnes, Jr., a former Ohio state representative. Though experts believe they are unlikely to win, all three candidates have deep connections in the district and could garner modest support at the polls, complicating Brown and Turner’s prospects in the crowded race.

Johnson and Barnes, in their questionnaires, were largely in accordance with Brown on matters relating to the Jewish state. “The funding to Israel should go without conditions,” Johnson told JI. “However, the United States should work to move parties in the direction of pursuing a two-state solution and discourage any use of our aid on anything away from that approach.”

“I will seek to strengthen relationships between the U.S. and Israel,” Barnes said in his questionnaire.

Smith, however, was somewhat more heterodox in her questionnaire, presenting as a kind of ideological hybrid of Brown and Turner, at least with regard to the Israeli-Palestinian conflict. She is in favor of conditioning aid to Israel, but unlike Turner, she did not provide a detailed explanation for her view.

“Israel’s strategic position in the Middle East, in addition to its world power of military strength, allows it to have a strong voice in all decisions made about its position,” she said, adding that the U.S. “should condition its aid for specific results as long as our position of power is not compromised as it would be if Israel were not our ally.”

Asked if she believed a two-state solution would help foster peace between Israelis and Palestinians, Smith was equally vague.

“Facilitating a two-state solution will perhaps be a beginning, as it was years ago, and that facilitation has grown into nothing more than a suggestion,” she told JI. “A two-state solution would establish ‘real’ parameters, thus establishing ‘real’ autonomy allowing Palestine the ability to grow militarily among other things. However, if Israel wants to maintain its strong strategic military position in the Middle East, then maybe a two-state solution is not a solution.”