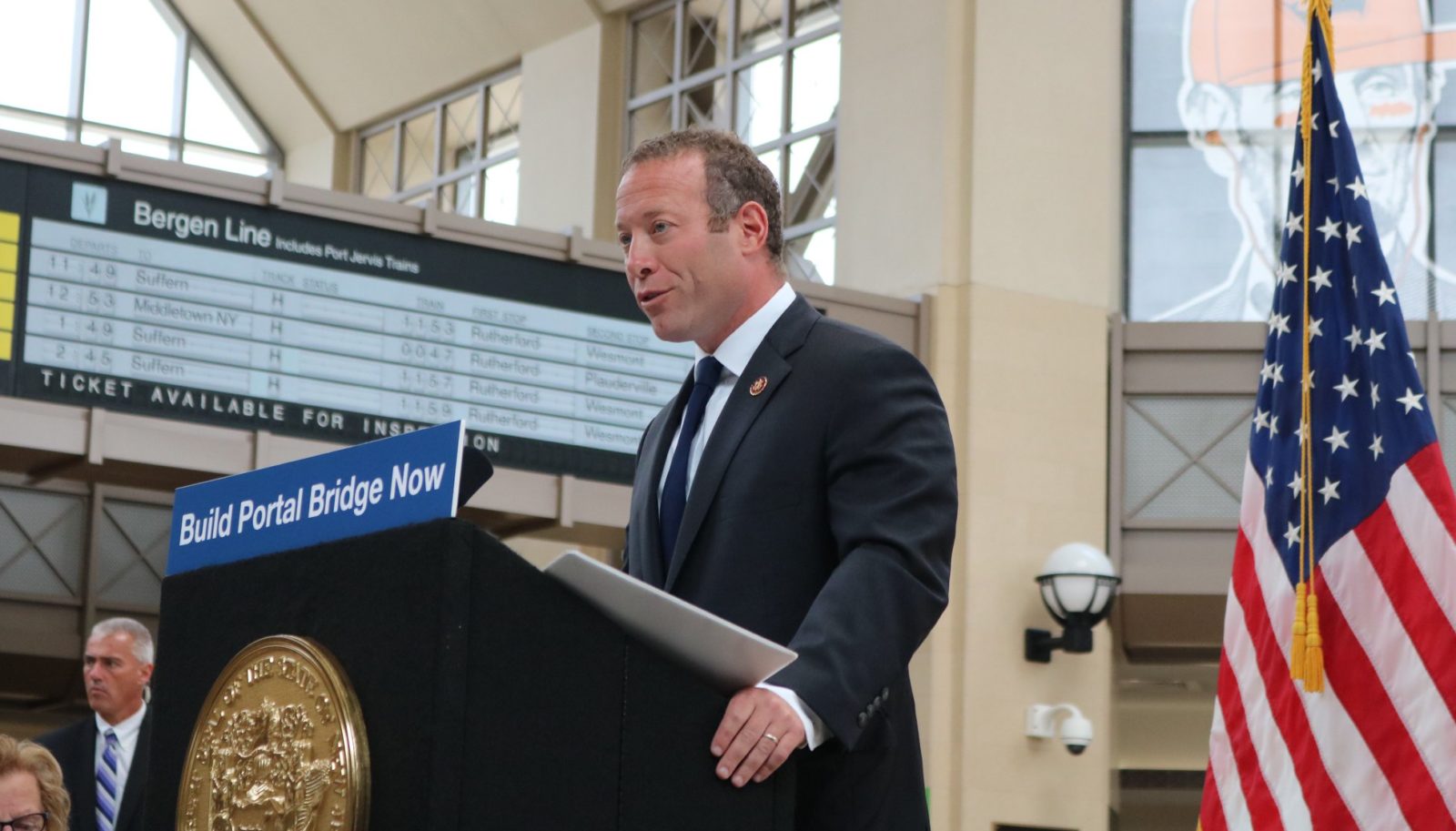 Josh Gottheimer isn’t known as a go-along Democrat. Since being elected to Congress to represent New Jersey’s 5th congressional district in 2016 — flipping a red district blue — Gottheimer has broken ranks with his caucus on a handful of domestic and foreign policy matters.

But the two-term congressman is a get-along Democrat.

As co-chair of the House Problem Solvers Caucus, Gottheimer invests his time in Washington on bipartisan efforts, including preserving support for Israel in Congress on both sides of the aisle.

“I’ve worked around the clock to not just fight for issues on a national level that are good for our district, but fighting for people and doing what’s best by putting our district first,” Gottheimer said in a recent interview with Jewish Insider. “That’s kind of always my test: Is this good for the 5th district, and if it is, fight for it and work with anyone to make it happen.”

Rabbi Menachem Genack, the CEO of the Orthodox Union’s kosher division, who lives nearby in Englewood, New Jersey, told JI that Gottheimer’s work in Washington has turned the congressman into a highly admired figure in Congress and across the conservative-leaning New Jersey district.

“If government is going to function, we have to get it back on being able to operate on both sides of the aisle,” Genack explained. “People who know him have a very high regard for him.”

Gottheimer, 45, started his political career in high school. At the age of 16 he worked as a Senate page, a prestigious non-partisan job, for former Sen. Frank Lautenberg (D-NJ). He later interned for former House Speaker Tom Foley (D-WA). In 1996, while an undergraduate at the University of Pennsylvania, Gottheimer joined President Bill Clinton’s re-election campaign as a rapid response staffer. After the election, he joined the White House as a member of the president’s speechwriting team, where he assisted in the drafting of, among other things, the annual State of the Union speech.

His past work in Washington and close ties with the Clintons were beneficial when he decided to run for Congress in 2016, challenging seven-term Republican Rep. Scott Garrett. After a bruising campaign, Gottheimer defeated the incumbent by four points and became the first Democrat in 84 years to win the district, which President Donald Trump also won that year. In 2018, he beat his GOP rival by 14 points.

This year, Gottheimer is being challenged in a Democratic primary by Glen Rock Councilwoman Arati Kreibich, a progressive who has received the backing of Sens. Bernie Sanders (I-VT) and Rep. Ayanna Pressley (D-MA).

In addition to receiving endorsements from both of his state’s senators, Gottheimer has been endorsed by House Speaker Nancy Pelosi, House Democratic Caucus Chairman Hakeem Jeffries (D-NY), Rep. Mikie Sherrill (D-NJ), State Senate Majority Leader Loretta Weinberg, the Jewish Democratic Council of America and Democratic Majority for Israel. Gottheimer has outraised Kreibich by close to $4.8 million, according to the most recent FEC filing.

Kreibich, a neuroscientist, volunteered for Gottheimer in his first re-election campaign in 2018.

A recent poll released by the Gottheimer campaign shows him with a significant lead — 62%-21% — over Kreibich. The Kreibich campaign shared internal polling with The Intercept indicating that when respondents have heard about both candidates, Kreibich comes within a two-point margin.

“If you look at my positions, if you look at my voting record, I am clearly a Democrat,” Gottheimer stressed, pointing to his support of major pieces of legislation put forth by the Democratic leadership. “If you look at who’s stood by me, who’s endorsed me, and the results in every county that I represent, it’s clear that I have received overwhelming support of Democrats because of the values we share as Democrats.”

On her campaign website, Kreibich shares her views on the Israeli-Palestinian conflict in detail — the only foreign policy issue mentioned on the site. While she favors a two-state solution, Kreibich touts her support for a “mutally agreed upon number” of Palestinian refugees to be allowed to settle in Israel, an “end of the Israeli occupation of the West Bank through settlements” and opposition to Trump’s Mideast peace plan, which she describes as “a thinly veiled annexation plan.​”

A Gottheimer campaign surrogate, who asked to be anonymous, noted that Kreibich chose to “basically go after our most dependable ally” but ignored human rights violations in countries like Russia, China and Syria.

NORPAC President Dr. Ben Chouake, who has hosted several fundraisers for Gottheimer, told JI that “the opposition to members of Congress who support a strong U.S.-Israel relationship is a very real threat.”

Gottheimer— who, unlike Engel, remained in the district and made himself available to his constituents during the COVID-19 outbreak — said he’s confident voters will reward him for representing “the values and the ideals” of the district. “From affordable health care, to clean water, to choice, to racial justice, and to reinstating SALT and lowering our taxes here, I’m focused on my district and I’m focused on working to get things done for my district,” he said. “There are other people who can politically armchair other districts. I focus on my district.”

Genack, who became known as “Bill Clinton’s rabbi,” suggested that the progressive challenge being mounted against Gottheimer is “retribution” for the congressman speaking out against Rep. Ilhan Omar (D-MN) after a series of tweets in which the Minnesota freshman accused AIPAC of paying lawmakers to be pro-Israel.

Rep. Rashida Tlaib (D-MI) also accused Gottheimer of acting like a “bully” in a meeting with her and Rep. Elaine Luria (D-VA), which was arranged last year to discuss Tlaib’s past comments about dual loyalty.

“There is no other Democrat who can win this district. It’s a conservative Republican district,” Genack said. “[The progressives] are willing to give up a Democratic seat just to challenge Gottheimer. What does that tell us about their agenda?”

Gottheimer is among a group of Democrats who refused to sign on to a recent House letter cautioning Israel against annexing parts of the West Bank. Instead, he issued a statement, urging Israel to “refrain” from annexing parts of the West Bank “outside of the context of negotiations.” In the statement, he noted that “it is in America’s national interest to maintain our ironclad commitment to Israel’s security by providing American security assistance under the 2016 U.S.-Israel Memorandum of Understanding negotiated during the Obama Administration.” A spokesperson for Gottheimer told JI that the congressman felt the need to express himself in his own way, specifically on the topic of aid.

Kreibich told JI that, were she a member of Congress, she would have signed onto the House letter against annexation authored by Reps. Brad Schneider (D-IL) and Jan Schakowsky (D-IL) and signed by 191 Democratic House members. “I support a two-state solution with a capital in Jerusalem for both states, and I believe that the United States has a responsibility to help to facilitate this solution,” the candidate emphasized.

Responding to a JI questionnaire, Kreibich said she’s committed to maintaining U.S military aid to Israel. “Israel is entitled to national security, and U.S. aid is vital to Israel’s ability to defend itself,” she explained. “I support aid to Israel, but we must also stand up to President Trump and resume humanitarian aid to Palestine, including through using U.N. agencies as an intermediary.”

Kreibich added that she supports last year’s House resolution (H.R. 326) expressing support for a two-state solution and opposition to unilateral annexation. Gottheimer, along with Reps. Ted Deutch (D-FL) and Tom Reed (R-NY), worked to include amendments — which reaffirmed the “ironclad” U.S. commitment to the MOU and to annual military assistance without new conditions — in the resolution.

Halie Soifer, the executive director of the Jewish Democratic Council of America, told JI that Gottheimer has been “fighting for our Jewish values and leading on key issues, including combating antisemitism and white nationalism, and supports a strong U.S.-Israel relationship.” Soifer added, “We are proud to call him our friend and strongly support his re-election.”

Chouake suggested that given the makeup of the district, if Gottheimer loses the primary next week, members of the Jewish community — who are very supportive of the incumbent Democrat — will switch their vote to the Republican candidate in the fall.