Investment banker Mike Gibbons said he supports the former president, but not his ‘cult of personality’ 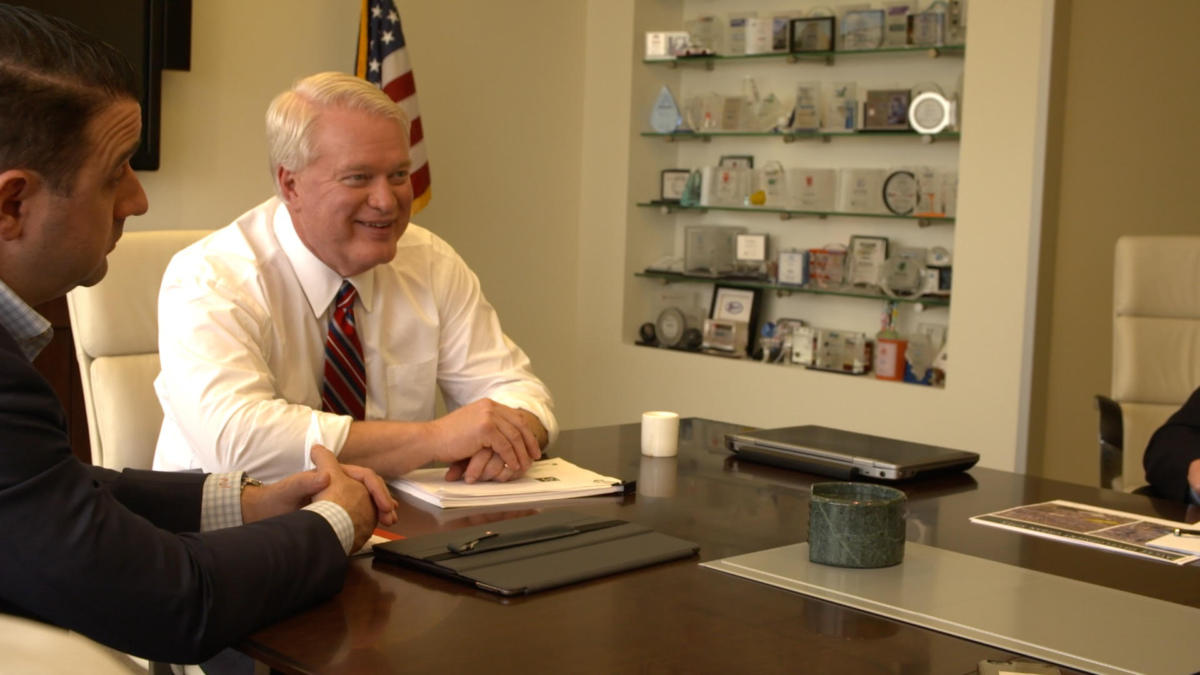 The Republican primary in Ohio’s open-seat Senate race has in many ways come to represent a fierce battle for Donald Trump’s loyalty. The former president, who has yet to make an endorsement, remains popular in the state, and most of the leading candidates, including Josh Mandel and Jane Timken, are eager to prove that they will be best suited to advance an “America First” agenda as outgoing moderate Sen. Rob Portman (R-OH) prepares to step down at the end of his term in 2022.

Cleveland-based investment banker Mike Gibbons, who entered the race in mid-April, is taking a different approach. While he says he supported the former president’s policies, he claims the race is about more than Trump. “I am a Trump supporter, but I’m not into the cult of personality,” Gibbons told Jewish Insider in a recent interview. “If he wouldn’t have done what he did when he was in there, I wouldn’t have supported him. It’s not about Donald Trump, it’s about America.”

That posture, however genuine, may also be a form of self-protection. Gibbons first ran for Senate in Ohio’s 2018 Republican primary, losing by nearly 16 points to former Rep. Jim Renacci (R-OH), who went on to lose the general election to incumbent Sen. Sherrod Brown (D-OH). Despite having served on Trump’s 2016 campaign, Gibbons failed to earn the former president’s endorsement. “I was Ohio finance co-chair in his campaign, and he didn’t even know it,” Gibbons griped. “He was never told.”

This time around, the 69-year-old GOP hopeful seems guarded on the subject of an endorsement. “If he wants to endorse me, that’s fine,” Gibbons said of Trump. “I think it’s a shame that an endorsement should mean that much. But generally, what I do is when all these people are fighting about how Trumpy they are, I just kind of say, here’s my business card from the ’16 election. I was his co-chair, I raised a lot of money for him, I gave a large amount of money, and I support his policies, period.”

The interview has been edited for length and clarity.

Jewish Insider: Why are you running now and how do you see a path to victory?

Mike Gibbons: I ran once before, and I learned a lot. I learned that the Republican Party has more to say about who wins than anybody else. The voters are kind of secondary, because you can gain a certain advantage by having the support of the party. Unlike the last time — although I still think there’s some issues — I’m a little better known, and I did pretty well the last time considering where I started. I got 32% of the vote in a five-way race, and I see that there’s a greater possibility for victory here than there was the last time, and we came pretty close.

But in the end, it wasn’t close, I guess. I exaggerated there. It wasn’t close. But I was ahead until Donald Trump came in and supported my opponent, which was kind of crazy because I was Ohio finance co-chair in his campaign, and he didn’t even know it. He was never told, and then the Ohio [Republican] Party endorsed my opponent, which was a promise that was made when they got him in the race, and I lost the momentum. At one point, I was up by seven [percentage points], but there were still 38% undecided, and when your name isn’t on the fight card, that hurts you. So that’s kind of the technical reason why I think I can win.

But I’m running for one clear and simple reason. I don’t like the way the country’s going. I’ve got five kids and five grandkids. I want them to have the same shot at the American dream that I had. Nothing disturbs me more than when a Democrat gets up and says the American dream is dead and it’s all favoritism and privilege and all that stuff, because I can assure you, I don’t believe that. I guess, technically, I’m Caucasian, so I apparently have privilege, but I didn’t even know the business I’m in right now existed and I didn’t know anybody, and I know if you work hard enough in America, you can achieve things. I’ve done that. The business that I’m in is, I sell intangibles, I sell myself. I’m an investment banker. A lot of people don’t know what that is; they think I’m a stockbroker or something. But I advise on large, complex transactions, generally around the world. I have to sell myself to CFOs and CEOs who usually are very successful people and very knowledgeable people in their own right, and I’ve been able to do that very successfully.

I’ve been an issues junkie for a long time; I studied political philosophy in college. It’s kind of been my hobby ever since. I’ve watched the world evolve. I have pretty strong opinions about where the world should be directed, and I don’t like where it’s headed.

JI: Do you have a favorite political philosopher?

Gibbons: Well, I have to tell you, in an economics course my sophomore year in college, I read Friedrich von Hayek’s Constitution of Liberty, and I didn’t know I was conservative at that point. My dad was a high school teacher and a wrestling coach. We were Democrats. When I was young, my dad moved to the Republican Party. My grandfather was president of the largest labor union in Cleveland, and he was also a Democrat. He ended up as a Republican. That didn’t influence me as much as Friedrich von Hayek. I’m a conservative because conservatism works. I’ve studied the effects of leftism throughout world history, and it’s been a disaster. I feel we’re headed on that path right now, and I think we need to reassess that, and we’ve got to have clear voices out there that can actually express the underlying reasons why we shouldn’t be doing what we’re doing and not just yell campaign slogans. I’m not a campaign slogan guy. You asked me for my favorite political philosopher. From Edmund Burke on out, through Russell Kirk and William Buckley, they influenced my thinking, there’s no doubt about it. I’m a Buckleyite, there’s no doubt. He was my intellectual hero. I guess that would be a long answer to your question.

JI: Do you think the Republican Party today conforms in any way with Buckley? Under Trump, it’s changed a lot.

Gibbons: It’s changed a lot in certain aspects. I don’t want to confuse Trump’s style with his underlying philosophy. I don’t know if you could call Donald Trump a conservative. I think he was more of a populist. I think that populist influence is strong in the Republican Party right now. But literally everything he actually did conformed with my political and philosophical beliefs. I think we need to secure our borders. I was pro-life before they called it pro-life. I’m a big believer in the Second Amendment, and it’s not because I want to defend myself or I want to go hunting — I think it’s an important part of our Constitution. I’ve done large financial transactions all over the world, and I can tell you I long ago noticed what was going on in how China was abusing their role. They were an emerging economic power when I started. Well, actually, they were still under Mao [Zedong] when I started. But they don’t play by the rules, and I think Donald Trump was the first one with enough gumption to go out and say, “We’re gonna force you to play by the rules, and you’re not going to keep draining us of our intellectual property.” I think he was the first one to stand up.

JI: Trump hasn’t yet made an endorsement in this race. Are you hoping he’ll back you?

Gibbons: I sat at a table — there were four of us — and he said, “I’m gonna stay out of it.” That was music to my ears. I think the voters of Ohio should decide who goes to the Senate, not three or four people in a back room. I’m sure if somebody pulls out ahead, he may end up endorsing. I am a Trump supporter, but I’m not into the cult of personality. If he wouldn’t have done what he did when he was in there, I wouldn’t have supported him. It’s not about Donald Trump, it’s about America, and I believe that certain things have to be done to solve a number of our problems, and he was doing a lot of them. So I support him under that pretense. If he wants to endorse me, that’s fine. I think it’s a shame that an endorsement should mean that much. But generally, what I do is when all these people are fighting about how Trumpy they are, I just kind of say, here’s my business card from the ’16 election. I was his co-chair, I raised a lot of money for him, I gave a large amount of money, and I support his policies, period.

JI: Trump remains popular in Ohio. What are your thoughts on his involvement in the January 6 riot at the Capitol, and how do you think that day will shape the dynamics of the race?

Gibbons: As far as January 6 goes, I’ve actually listened to the whole speech. I think that there were radical elements involved. I think largely there was a combination of right-wing and left-wing radical elements that precipitated this. I think the media is not reporting it completely fairly. I would not have voted to impeach, I can tell you that. I think I would have left well enough alone. It was an embarrassment. If I would have been in the Senate at that time, I would have walked out and tried to stop them. I have to assume that if you are truly patriotic, you’re not coming into the U.S. Capitol with firearms, and they didn’t. They were violent, and I’m not sure, when all is said and done, we know who exactly was the most violent. I’ve talked to a lot of people that were there on the campaign trail, and they said it was very peaceful, they were very respectful, and then all of a sudden they heard the noise and the fire. I think it was an unfortunate element that I don’t want to be associated with.

JI: What are your thoughts on the U.S.-Israel relationship? The Democratic Party seems much more divided than Republicans are on this issue.

Gibbons: I have a lot of Jewish donors that are friends of mine, longtime friends of mine, and they know how I feel about Israel. I think that the Jewish people were the most persecuted people in the history of the world. I think that it’s imperative that we support Israel in every regard. I’ve been a Zionist since I knew what the term meant, and I strongly support Israel. I think they could stop the whole conflict if Hamas would stop shooting rockets. I think they’re literally sacrificing their own children for the media, and it’s a real shame.

Gibbons: I don’t think we should be electing the person that yells the loudest or inflames your passions the most. I think you’ve got to calculate and see who could be effective, who could reason with the philosophical opposites. I’ve done that my whole life. I think I could be very effective at it.