Inside JFNA’s lobbying efforts on the COVID-19 relief bill

'Nothing dramatic is being changed with perhaps the exception of the minimum wage. That's the key wildcard,' said lobbyist Steve Woolf 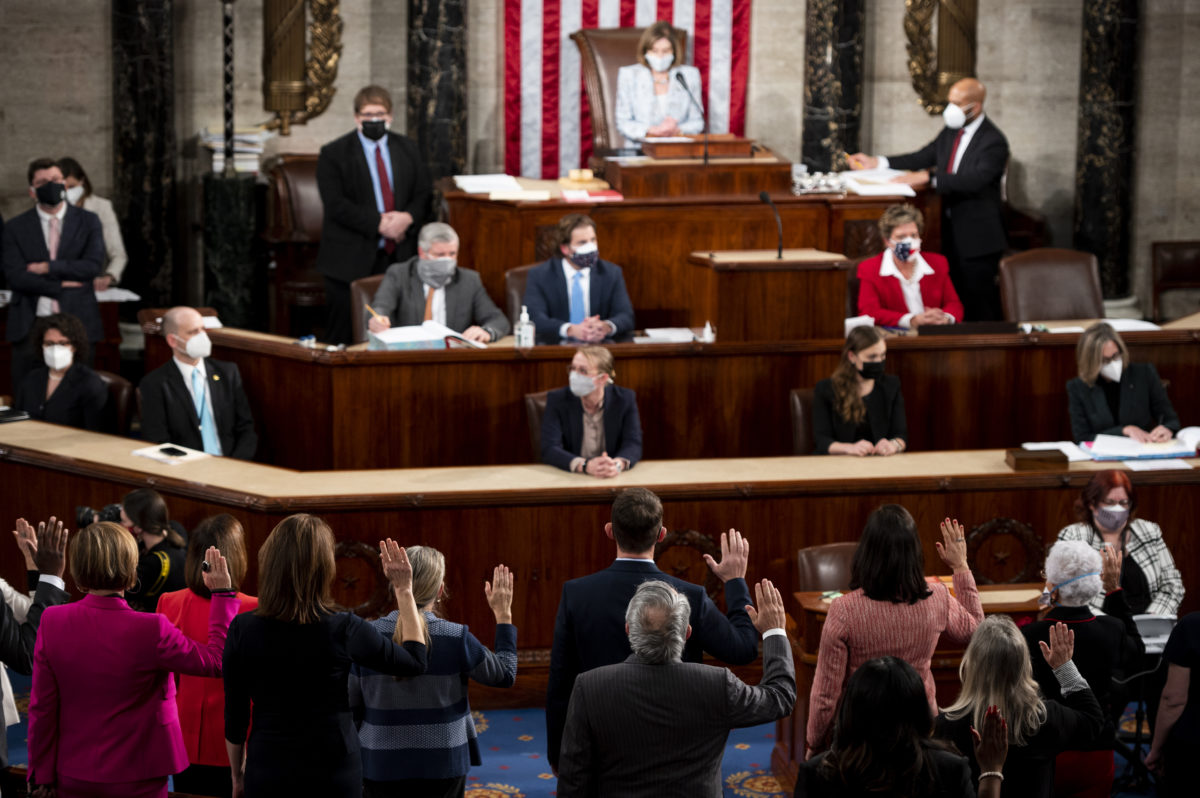 House Speaker Nancy Pelosi administers the oath of office to members of the 117th Congress.

When he spoke to Jewish Insider late Monday morning, Jewish Federations of North America lobbyist Steven Woolf was fresh off a call with staffers working for Sen. Maggie Hassan (D-NH) — having been on similar calls since 7:30 a.m.

Woolf’s work, alongside other JFNA lobbyists, is part of a scramble to make tweaks to the latest COVID-19 relief bill as it races through Congress ahead of the March 14 expiration of federal unemployment insurance benefits.

The JFNA lobbyist said one of the organization’s top priorities is lobbying senators for further increases in unemployment insurance reimbursement programs for self-insured nonprofits. The current bill includes 75% reimbursement — up from 50% previously — but JFNA and other nonprofits would like to see that pushed up to 100%.

“Many Jewish organizations, federations and others have been self-insuring for many years and have been doing it in a very responsible manner,” Woolf told JI. “But they’ve been hit with huge unemployment bills by the state unemployment insurance programs. And in many cases, that’s really put a crimp on their operating budgets. And that’s a huge, huge dollar burden on many nonprofits, including Jewish organizations.”

In the interest of expediting the bill, the Senate is skipping the standard committee markup process.

“That’s why we’re spending a lot of our lobbying time right now talking to senators because, for example, getting a change in the self-insured unemployment [is not likely] on the House side, because the bill’s pretty much cooked,” Woolf explained. “I think there will be some minor changes in the bill that the Senate will pass sometime next week.”

Senate leadership is also planning on pre-clearing changes to the bill with House leadership, to avoid holdups when the revised bill returns to a vote in the House. According to Woolf, the final Senate bill will be largely in line with the House’s draft.

“Nothing dramatic is being changed with perhaps the exception of the minimum wage. That’s the key wildcard,” he said. “If they go from 75% reimbursement of unemployment insurance to 100%, I think that’s something that again, the House will buy off on.”

Woolf described himself as “optimistic” that the reimbursement increase could go through in the Senate, but noted that he doesn’t want to “count our chickens,” because the bill’s cap of $1.9 trillion makes it “sort of a zero-sum game.”

“If you increase something, the cost has to be paid coming from somewhere else,” Woolf explained. “We are optimistic, but I think it’s going to be a tough battle. [Majority] Leader [Chuck] Schumer (D-NY) has also been a great advocate for nonprofits throughout this.”

JFNA is also hopeful that the final bill will include an extension of the deadline — currently March 31 — to apply for Paycheck Protection Plan loans.

But two other provisions JFNA supports — an expansion and an extension of universal charitable tax deductions and an increase in federal Medicaid reimbursements to states, known as FMAP — appear unlikely to make it into the bill, due to the high price tags associated with them.

“We hope that something can be done for the end of this year, at least,” on charitable tax deductions, Woolf said. “We’re asking that senators keep that in mind, but we’re pretty much realistically acknowledging that that’s not going to be in this bill. But that’s a fight we’re going to fight toward the end of 2021 to ensure that it’s increased and extended to 2022 and beyond.”

“It’s tough for us to argue against that,” he said. “We’ll continue to work on that, along with some of our other coalition partners,” Woolf continued, “but it’s clearly not going to be in this bill. We continue to work on it because it’s a priority issue for many nonprofits, not just Jewish federations.”

Overall, Woolf said JFNA is pleased with many of the provisions included in the bill — including changes to PPP allowing larger organizations to access the program; state and local aid that will ultimately trickle down to local Jewish nonprofits that are government contractors; an extension of the employee retention tax credit; expansions of child and earned income tax credits; and expansions of food stamp funding — but noted that it’s likely to face narrow confirmation votes in both houses of Congress.

“I think it’s going to be very partisan, quite frankly, I’m not sure that there’s going to be any Republican votes picked up — maybe a few in the House, two in the Senate, maybe not,” he said. “But I think the Democrats have the votes to push this through.”