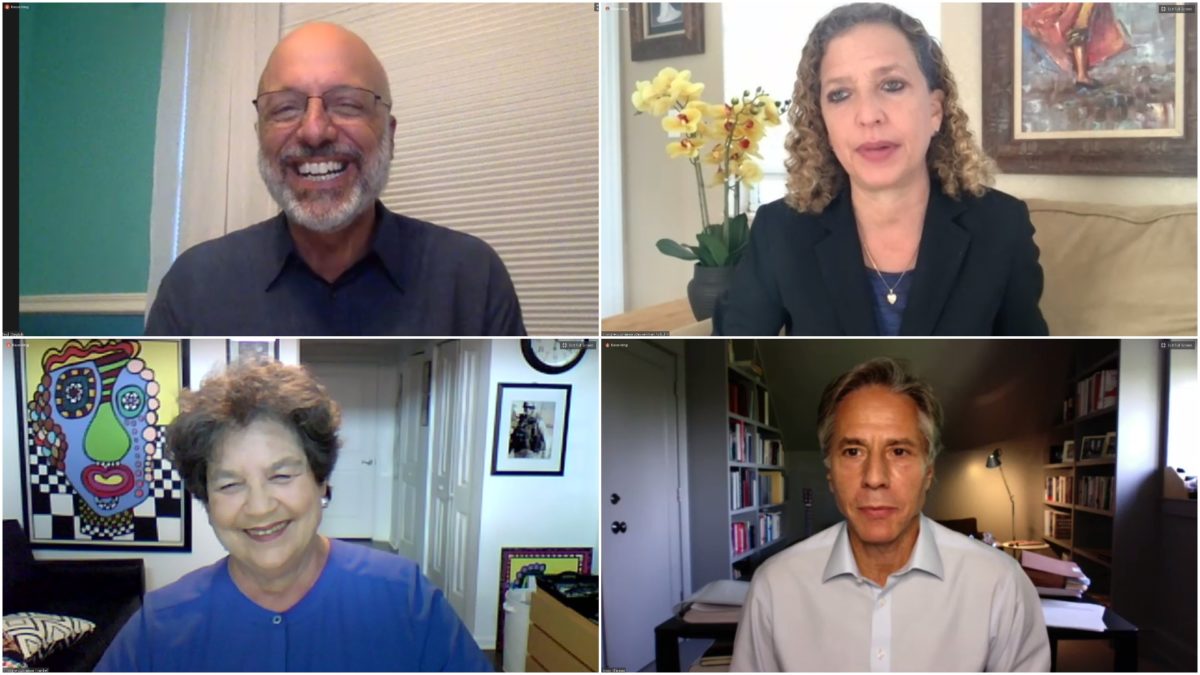 The three Jewish Democratic House members from Florida — Reps. Ted Deutch, Lois Frankel and Debbie Wasserman Schultz — discussed their support of Joe Biden and the issues that matter to Jewish voters in a Zoom event yesterday, dubbed as a celebration of Jewish American Heritage Month. The call was moderated by Sarah Bard, who is serving as the de facto director of Jewish outreach for the Biden campaign, and also attended by senior advisor Tony Blinken and deputy political director John McCarthy.

Born free: Frankel noted in her remarks that she was born the same day Israel formally applied for membership in the United Nations — May 16, 1948. “So it’s always been especially important to me that we have Israel’s back, that we have this warm friendship and security pledge, and I know that Joe Biden would do that without making Israel a political football, that has been just a terrible mark of this current administration,” Frankel said.

Strong at home, stronger abroad: Deutch stressed that the presumptive Democratic presidential nominee is committed to a strong U.S.-Israel relationship, “and he doesn’t view Israel as a political issue. He views it as something that matters to him, something that he learned about growing up, and the need for the State of Israel after the Holocaust.” Deutch added: “The best thing we can do to have a strong Israel is to have a strong America… and we have a president right now who spends every day trying to undermine the people’s belief in our institutions, pitting one group against another, behaving in ways that aren’t decent and aren’t kind, and that don’t represent the kind of leadership that we need in our country, let alone the ability to project American values abroad.”

Pushback: Former Mideast peace envoy Jason Greenblatt reacted to Biden’s recent warning that Israeli annexation of portions of the West Bank “will choke off any hope for peace” during a wecast with Rabbi Shmuley Boteach yesterday. “That’s nonsense,” Greenblatt said. Pointing to Hamas’s rule of Gaza as an example, he said, Biden and the Europeans “are so hyper focused on what they call settlements and annexation — as if that is key to solving this conflict. It’s not, it shouldn’t be spoken about in that way.”

Greenblatt also questioned why Biden didn’t equally criticize Palestinian Authority President Mahmoud Abbas’s announcement on Tuesday that he would null all agreements and security arrangements with Israel. “Statements like that are very unhelpful, and I’d love to hear what Joe Biden says about those statements instead of focusing on annexation,” he said. “If you want to focus on annexation, where is the rest of your discussion on this topic?”