Rep. Raskin to Trump: It was not our president who equated neo-Nazis and klansmen with anti-racist protestors 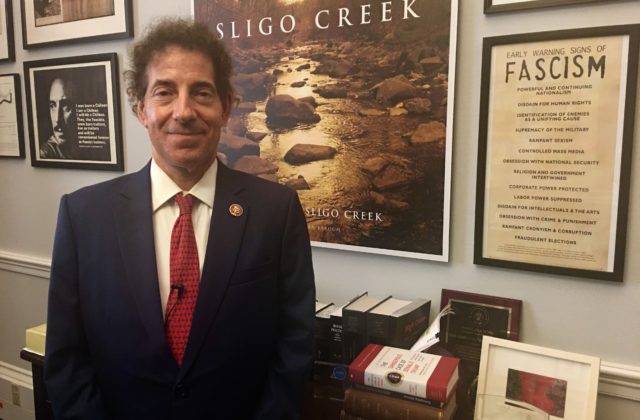 Representative Jamie Raskin (D-MD) is in his second term in Congress – elected in 2016 to represent Maryland’s eighth congressional district – but brings to the table over a decade of experience in the Maryland state legislature as over 25 years as a professor on constitutional law.

His knowledge and experience make him a key member of the House Judiciary (vice-chair of the subcommittee on the constitution) and Oversight committees (chair of the subcommittee on civil rights and civil liberties.). In the 116th Congress, he was elected to represent at the leadership level all junior Democratic members of the House, about 142 members who have served less than five terms. In this role he’s also sought to encourage camaraderie and bridge divides, with meetings and field trips on topics ranging from a trip to the U.S. Holocaust Memorial Museum to dinners discussing how to speak up and participate in agenda-setting discourse.

Rep. Raksin, who is Jewish, was the co-author of the anti-hate resolution passed in March (H.Res183), an effort to condemn antisemitism in the wake of remarks by Rep. Ilhan Omar (D-MN).

On Monday, following a weekend of violence between Hamas in the Gaza Strip and Israel, Rep. Raksin spoke with Jewish Insider about House legislation concerning U.S. support for Israel, the Israeli-Palestinian conflict and the view of American Jews today.

Laura Kelly: To begin, would you like to make any comment on the recent violence between Hamas and Palestinian Islamic Jihad in the Gaza Strip and Israel?

Jamie Raskin: It’s a terrible and dangerous situation. The rocket fire on Israel is completely unacceptable and the loss of life on both sides is intolerable. All of it to me, speaks to the need to revive a meaningful peace process quickly and to end the violence.

LK: A few weeks ago in Jewish Insider we reported on how Jewish members meet a bit informally, not as a formal caucus but regularly to discuss issues that they should all come together on. There have been public calls to formalize that group and maybe some discussions within the group… Can you talk about the benefits of a formalized caucus or what is the benefit of keeping it in an informal state right now?

JR: There are several Jewish members that are chairs of committees – Congressman [Jerrold] Nadler (D-NY) is Chair of Judiciary. Congressman Schiff is chair of Intelligence. [Rep.] Nita Lowey (D-NY) is the Appropriations hair. The original ethnic or racial caucuses that formed, the black caucus and the hispanic caucus, were among the minorities who felt like they needed to consolidate their forces in order to manifest power and presence within an institution. I don’t know if that would be a necessary reason for the Jewish members to do it. However, bringing Jewish members together to have a dialogue about matters of common interest makes a lot of sense.

JR: We should be doing everything in our power to resist, to oppose the resurgence of antisemitism and other forms of hatred and Jewish people and other kinds of racism. Antisemitism and racism are threats, not just to Jews and African-Americans and other minority groups targeted, they are a threat to democracy, they are a threat to constitutional order and they are a threat to civilization. They are the expression of groups and movements that destroy everything humanities built. I just think that… The resolution which we adopted in the House [H.Res183], I tried to resist the idea that different minority groups should be pitted against each other, some kind of competition. That’s obviously a dead end for our people who want to continue equal rights and social justice…

LK: Rep. Alan Lowenthal (D-CA) introduced a resolution expressing the sense of congress to support the two-state solution between the Israelis and the Palestinians… will you sign on as co-sponsor?

JR: If I’m not formally on it…I told my staff last night to add me to the two-state solution resolution.

LK: Some of the language in the resolution it references ending the occupation and opposing settlement activity, also opposing efforts to unilaterally annex parts of the West Bank…

JR: All of those would presumably be a threat to a two-state solution. I think it has been the commitment of American foreign policy to try to prevent both sides from doing anything that will disrupt the possibility of a two-state solution and a lasting peace between the two-sides.

LK: Using that specific language, we all know in discussing the Israeli-Palestinian conflict language matters a lot, are those efforts to specifically reference Prime Minister Netanyahu and his pre-election promises to annex parts of the West Bank?

JR: I haven’t spoken to Congressman Lowenthal, I don’t know exactly what he had in mind but, the annexation is obviously — the idea of annexation is a major obstacle to a viable two-state solution and diplomatic process.

JR: I do not favor BDS, I do not favor strategies of isolation and quarantine and boycott. I think that what the Middle East needs is just the reverse. It needs a lot more dialogue, a lot more social exchange and engagement between the two sides. All nations and communities there. You know, I’m not on any of the foreign policy committees … but what I tried to do is to sponsor discussions here about efforts to bring Israelis and Palestinians together.

So we had one discussion with a group tries to bring medical resources from Israel to the Palestinians and to share create a sharing arrangement among hospitals and medical facilities there. We brought here a project of young entrepreneurs, Israeli and Palestinian entrepreneurs, to work on business ventures together and to develop business ideas. In my very small way, I’ve been most interested in trying to advocate people-to-people projects and exchanges to promote peace and diplomacy and social connection. The cycle of violence can continue forever on its own, the challenge is how to create mechanisms of social reconstruction that cut through the cycle of violence.

LK: With your opposition to efforts to boycott Israel, therefore, would you support S.1 in saying that the government should not do business with people who boycott, or companies that boycott Israel? [A provision in S.1 called the ‘Combating BDS Act of 2019: allows a state or local government to adopt measures to divest its assets from entities using boycotts, divestments, or sanctions to influence Israel’s policies.’]

JR: There’s a problem with — again there have been so many Senate iterations I haven’t kept track of all of them — at least, there was a problem with the original version of that legislation advocated by our Maryland Senator Ben Cardin, I felt that there were big constitutional problems with it.

A lot of these [anti-]BDS laws have been struck down in different parts of the country because they operate on the principle that, essentially if you boycott Israel then you can’t get a government contract or job or something like that. The problem with that is that the US supreme court, in a case called the NAACP vs Claiborne Hardware found that boycotting is First Amendment protected activity. Just as you have the right to publish an article, or have a protest, you have a right to not shop some place, or not patronize some place, and then tell people you’re not doing that and then encourage them to do the same thing. So, the supreme court has said that boycott is constitutional [unclear] activity.

So, if you try to deny any sort of public benefit or job to someone participating in a boycott, you are burdening their first amendment rights, and that’s why a number of these laws have been struck down. That’s why, I’m afraid, at least the first version that I saw, of the Cardin bill, also ran afoul of the unconstitutional conditions doctrine. That’s the doctrine which says you can’t condition receipt of a public benefit on surrender of exercise of a constitutional right. In other words, you can’t say that people who engage in the boycott of this or that business or country or practice, can’t receive a particular public benefit.

Jewish-Americans are voting for Democrats at 77 or 78 percent because the Democratic party embodies many of the values that the Jewish people have traditionally believed in. The Democratic party is the party that stands strong against discrimination, it stands strong against race and religious hatred. It stands strong for diversity and tolerance. It stands strong for social justice. It’s the party of the outsiders and downtrodden, we champion social security, medicare, medicaid, the Affordable Care Act. We fought to create laws against child labor, we fought for the Wagner Act, the right of working people to organize. We’re for women’s rights and women’s right to choose, we are the party of strong liberal democracy. And Jews are obviously not monolithic, Jews are all over the map, but there are extreme right-wing Jews, extreme left-wing Jews, there are lots of liberal and progressive Jews, but I think that most Jews believe that the Democratic party is the party that stands with the civilizing movements of the 20th century.

It was not our president who equated neo-Nazis and klansmen with anti-racist protestors, that was not Barack Obama or Bill Clinton that said that. That was Donald Trump. It was not our party which ran the most antisemitic political TV ad, in the history of the United States in 2016. That was Donald Trump. Donald Trump ran a TV ad targeting Janet Yellin, Lloyd Blankfein and George Soros as the enemies of the American people, this was essentially the closing argument of the Trump campaign in 2016. One could only regard with amazement the idea that Donald Trump would even bring up the question of a political party being antisemitic in America in 2019, because if there is an antisemitic political party, it’s not the Democrats.