In his final pitch to voters at a Montgomery County historic estate, the Republican candidate left out Trump and Mastriano 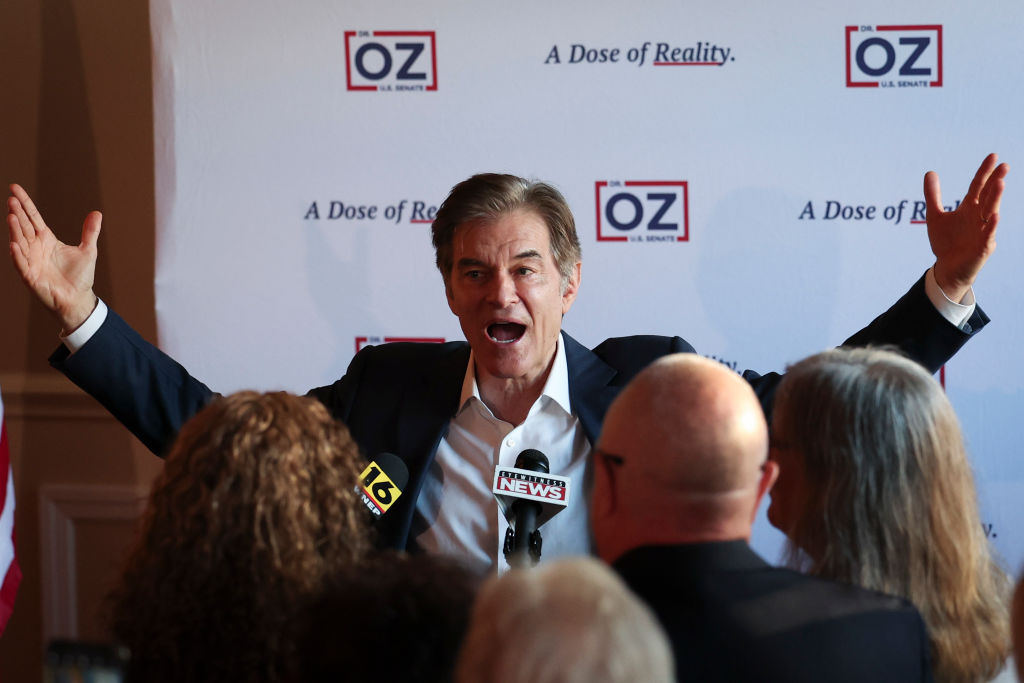 Republican U.S. Senate candidate Dr. Mehmet Oz speaks to supporters during an event at The Pines Eatery & Spirits on the final day before votes are cast November 7, 2022, in Hazleton, Pa.

PENNSBURG, Pa. — At his final campaign event the night before Election Day, Pennsylvania Senate candidate Dr. Mehmet Oz pitched himself as a common-sense candidate and urged his supporters to reach across the aisle to encourage friends and family members to vote.

“I want you to go out and talk to conservative Democrats and independents,” the Republican told the crowd of roughly 1,500 supporters at a historic farm at the far edge of Montgomery County, about 45 minutes from Philadelphia. Ask their friends, he said, if they’re happy with the status quo: “Your friends are going to say, ‘No, I’m worried about our country.’ I love it dearly,” said Oz.

The crowd was packed with red “Make America Great Again” hats, but Oz did not mention former President Donald Trump, whose endorsement he received during the primary campaign. Nor did Oz — or any of the speakers at the event — mention Doug Mastriano, the state’s controversial Republican gubernatorial candidate. All three men appeared together on Saturday at a campaign rally in a much redder part of the state.

It was an example of the tightrope that Oz and other Republicans walk in areas where swing voters, who may be skeptical of Trump but are also critical of Democratic leadership at a time of rising inflation, could decide the election.

The argument made at the event was an old-school pitch, one that’s familiar from past midterm elections, when an unpopular president comes before the voters at a time of economic hardship.

Oz told voters he wanted to restore a sense of normalcy to America, and bring back the patriotism he says has been shunned by Democrats.

“I’ll bring balance to Washington, and John Fetterman? He’ll bring more extreme,” Oz said of his Democratic opponent, the state’s lieutenant governor. Democrats are attempting to make a similar point about Republican candidates — that candidates who belong to Trump’s party and have raised doubts about the legitimacy of the 2020 election are too extreme to serve in Washington.

The Senate race is viewed as a toss-up, with Fetterman falling in the polls in recent weeks and Oz picking up support from independent voters. With control of the Senate on the line, Pennsylvania is a key bellwether state for both Republicans and Democrats.

The longtime talk show host took the stage, in front of a massive American flag draped over the outside of a barn, after a host of Republican officials, including local party officials, Republican National Committee chair Ronna McDaniel and former South Carolina governor and former U.S. Ambassador to the United Nations Nikki Haley.

“We are a country of freedom-loving patriots who know that it’s time to right the ship,” said Haley, a frequent guest of Republican campaigns around the country. In the past two days, she spoke at rallies for Herschel Walker in Georgia, Don Bolduc in New Hampshire and Ron Johnson in Wisconsin. But Pennsylvania, Haley added, is especially important. “Ladies and gentlemen, in Pennsylvania, you’re not just righting the ship for your state. You’re getting ready to right the ship for our country.”

Both Haley and Oz, fierce critics of illegal immigration, talked about their parents, who had immigrated to the U.S. legally from India and Turkey, respectively. “My parents were immigrants. We live the American dream. We’re the embodiment of it,” said Oz.

It’s their patriotism that America needs, Haley said. “Dr. Oz knows what I know. When you’re the child of immigrants, you know the sacrifice, you know the love of country, you know the fact that your parents raised you to give back because of how blessed you are,” she said.

Her speech only loosely touched on foreign policy, with a brief mention of America’s withdrawal from Afghanistan and a disavowal of China’s growth on the global stage. But by hoping for a return to what she deemed a stronger, more patriotic America, Haley was expressing her vision of the U.S. and the image it project abroad.

She told the crowd that during her time at the U.N., “ambassadors would pull me to the side, and they loved the fact that we had freedom of speech, freedom of religion, freedom to do and be anything we want to be without government getting in the way,” Haley recalled. “We have to understand that this is the best country in the world, and America deserves our love and respect.”

When Haley asked who in the crowd had voted yet — the state offers vote-by-mail to anyone who wants it — fewer than a dozen hands went up. (“One day, one vote,” one man started chanting, a reference to a policy supported by some conservatives that would end early and mail-in voting due to the belief that such a policy might limit election fraud.)

Some people started leaving early, during Oz’s speech, hoping to skip either the traffic or the weather that had dropped 20 degrees in two hours. But on the way out, nearly all of them stopped to pick up an Oz campaign sign. “What will I do with this on Wednesday?” one of them asked.