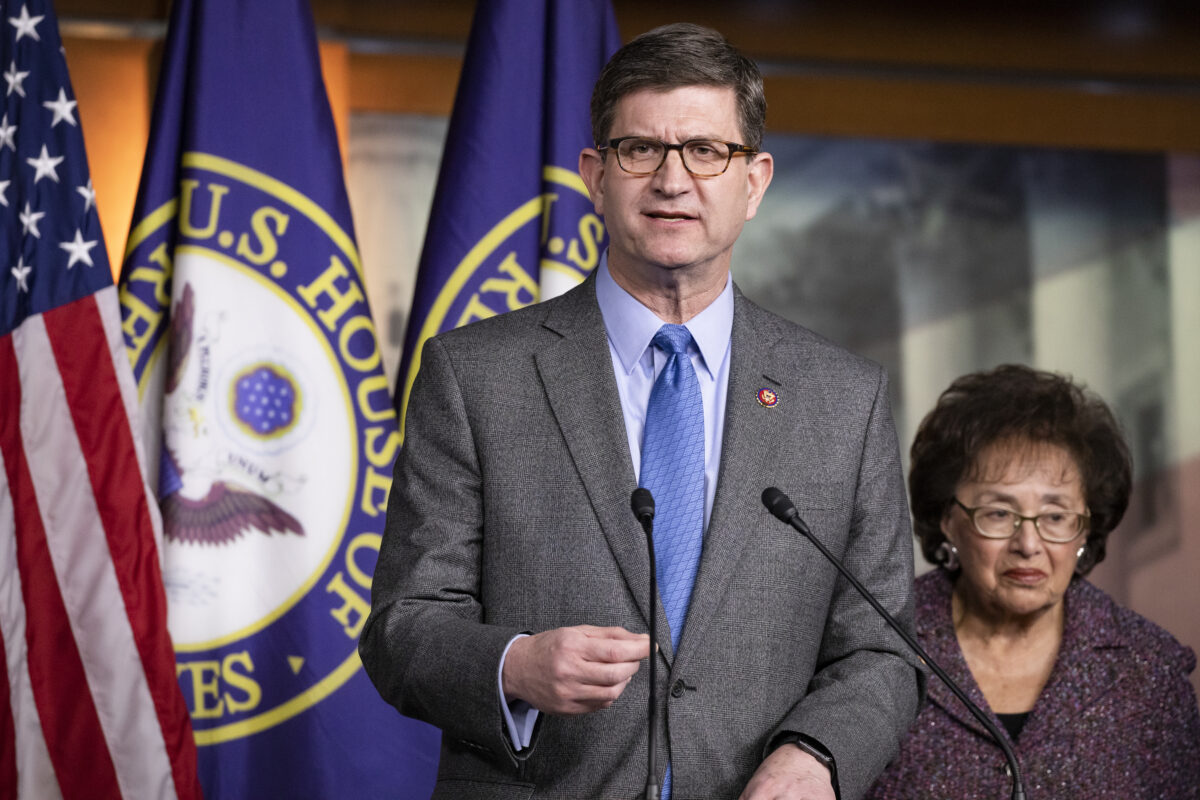 Rep. Brad Schneider (D-IL) speaks about his experiences during a trip to Israel and Auschwitz-Birkenau as part of a bipartisan delegation from the House of Representatives on January 28, 2020, in Washington, D.C.

Politics, Judaism and positive U.S.-Israel relations have been important to Rep. Brad Schneider, (D-IL), since long before he entered Congress.

In high school, Schneider was president of his youth group, then became active in his college’s AIPAC chapter and got involved with the Jewish United Fund of Metropolitan Chicago after graduation, for which he was an officer in their young leadership division.

He chaired the Chicago Alliance of Latinos and Jews for four years, and held a position on the Jewish Federations of North America’s National Young Leadership Cabinet — but it was his role as an inaugural member of AIPAC’s New Leadership Network that ultimately led him to pursue a congressional career, thanks to the relationships he made as part of the program.

An Abraham Accords Caucus co-chair and member of the House Committee on Foreign Affairs (as well as its subcommittee on the Middle East, North Africa and Global Counterterrorism), among others, Schneider continues to combat antisemitism and work toward strengthening the United State’s relationship with Israel.

On this week’s episode of Jewish Insider’s “Limited Liability Podcast,” Schneider joins co-hosts Rich Goldberg and Jarrod Bernstein for a conversation on Iran, bipartisanship in Washington, and the state of antisemitism today.

Below are excerpts of the conversation.

On the aftermath of the Highland Park Fourth of July parade shooting: “When my team leader said shots had been fired, so everyone was kind of scattering and trying to get to safety, I had no idea what was happening. My first thought is that a couple of young people got into a fight and there might have been a couple of shots fired. What we know now is that a deranged young man climbed a ladder to a rooftop and fired eighty-three rounds in less than a minute, murdering seven people, wounding 41 others and traumatizing our entire community. And it is still very much traumatized. But this is a community that is strong and is close and is working to navigate its way through this tragedy. But I think it’s a tragedy that resonated across the country because it was the Fourth of July. Whether it’s a suburban community north of Chicago or a large city like Chicago, or rural communities around the country, everyone celebrates the Fourth, everyone identifies with families getting together parents, children, grandparents, and celebrating, and that was shattered on July 4 of this year.”

On maintaining bipartisan relationships in Washington: “My district is and I think always will be a swing district. People living in this district tend to be in the middle, whether it’s center-left, center-right, they’re in the middle. I have always said I’m committed to working with anyone as long as they come to the table with an open mind, bring ideas…I’ve done that before I was in Congress, as long as I am in Congress I will continue to do that, and I think I get a lot of support across my district, and part of that is being able to talk to each other. I have a saying, I raised my kids with this idea, I’ve practiced it in my professional career as well as in politics: I don’t have to prove you wrong to be confident of my beliefs, but I’m not [so] certain of what I know not to listen to what you have to say, and maybe learn and move from where I am. And if you have that philosophy, you can work with anybody. And I do. I’m very proud of my relationships across the aisle in Congress. In fact, my first terms, one of the people I did more bipartisan legislation with than any other Republican was [former Rep., later chief of staff to former President Donald Trump] Mark Meadows — in 2014, we introduced the Hezbollah International Financing Prevention Act”

On Kanye and antisemitism: “You know, this is a scary moment, and it’s not a new wave [of antisemitism], this wave has been growing for a number of years. That’s why we formed the Antisemitism Task Force back in 2014, and we’re seeing antisemitism rise across the country and around the world. What Kanye said isn’t just reprehensible, it should strike fear in all of us. Kanye has more followers than there are Jews in the world, and the stuff he is saying is dangerous, it’s threatening, it’s a real concern. It’s not just Kanye, however, I mean, we’re seeing antisemitism across the board. We saw Students for Justice in Palestine at the University of California, Berkeley Law School convince nine organizations to ban any speaker on any subject who supported Israel or was pro-Zionist, and that is being rightfully called out. We have to call that wherever we see it. When Rashida Tlaib says you can’t be progressive and pro-Israel, we have to call that out and condemn it — we have a former president of the United States who’s saying that you can’t be Jewish and not support the Republicans. Jews run the panoply of political thought, we always have, we always will — as the saying goes, ‘you have two Jews, three opinions’ — that’s who we are, but we can be loyal Americans committed to our democracy, support the State of Israel and proudly celebrate our faith as Jews.”

On the BDS movement and the need for positive Israel sentiment in Congress: “There’s broad support for the U.S.-Israel relationship, and condemnation of those who would boycott Israel, who would seek to delegitimize Israel. And as I mentioned before, we have so much turnover in Congress, it’s not enough just to make this statement a few years ago [when the House passed a BDS resolution bill that didn’t make it through the Senate], we’re gonna have to explain to new members why this is an important issue, help them understand the details of it. One of the things I worked very hard at last time was explaining to folks who said, you know, ‘we used boycotts in the Civil Rights movement,’ and saying that the global BDS movement and their idea of boycott is something entirely different. They’re delegitimizing an entire people’s aspirations to a nation of their own. And anti-Zionism is inherently antisemitism, so I think we will continue that conversation. I think there’s also, we’re seeing the rise of antisemitism and other issues, and we need to be talking about that and Congress needs to address it in a constructive way. And not Congress alone, it is working with other organizations like ADL and AJC and groups that are speaking out, and not just in Jewish organizations, reaching across and building those relationships with other groups as well.”

On the Abraham Accords: “[A] little more than two years ago, UAE [and] Bahrain came together with Israel, with American leadership under the Trump administration, and established the first treaty between Israel and Arab countries since 1994 when Jordan signed a treaty. This one was different, it was full normalization, and we’ve seen the impact of that from the get-go. Exchanges, not just at a commercial level, businesses going back and forth, investment going back and forth between the countries, as well as people visiting, cultural exchanges, as well as security exchanges and the growth of that. The Abraham Accords Caucus introduced the Defend Act, something that would try to unify the anti-missile defense of these countries, and it’s a big deal and there’s new opportunities. We’ve seen some changes with Saudi Arabia on the one hand, President Biden visited Israel and flew directly from Israel to Saudi Arabia, that was a big deal. We also are seeing some concerns. You know, I can’t say I’m surprised by the Saudi actions with OPEC and cutting production, but certainly disappointed, because there are opportunities for the region that will enhance security and enhance the economic well-being of all the people in the region, and increase the prospects for peace. So, as we’ve learned over time in the Middle East, there is no one line to where you’re trying to get, and you’re always dealing with forces pushing forward and forces pushing in the opposite direction.”

On the Iran nuclear deal: “For me, it’s very simple: Iran can never be allowed to have a nuclear weapon. And unfortunately, we’re in a situation where Iran is very close, days away from having enough fissile material in fully enriched uranium to manufacture multiple bombs. They’ve already enriched to 60%, it’s not a big leap to get to the 90%+ that’s necessary for weapons. The assessment is that even though they could do that in a couple of days, they’re further away from having the ability to create a device to deliver that material, but still, we have to make sure Iran can never have a weapon. That means ultimately, whether it’s before and you avoid military action, or post-military action, you end up in negotiations, I would love to get Iran to reverse its course and its nuclear program without having to take military action, but Iran has to understand that [the] United States, Israel, others, are not going to allow for them to have a nuclear weapon, and that means all options are on the table, as President Biden has said. Iran has to believe that, I believe, before they’re going to take the steps.”

Bonus lighting round: Favorite Yiddish word or phrase? “I was thinking about this question in anticipation you might ask it, and I realized I don’t know any Yiddish. And then I realized that I use Yiddish every single day just in the course of life, whether it’s as I’m sitting here talking to you with things I gotta do, I’ve got the shpilkes, or you know, there’s mess on the desk, I’ve got schmutz. You can run down the list of words that are part of our everyday conversation, and that’s what’s so beautiful about Yiddish, because the words kind of sound like what they are.”

Favorite place in Israel? “We went hiking into a national park called Yehudiya, and rappelling down a waterfall with my kids. At the time, I think my youngest, who turned 28 on Monday, was six, and he was attached to me. I had never rappelled before in my life, kind of fearful of heights, and imagine doing it down a waterfall with your child attached to you, but it takes you out of your comfort zone. But there are so many places, and usually it’s in the north, it’s in the Galil, and it has to do with beautiful views, sunsets or something like that.”

Best kosher food in the Chicagoland area? “I’m gonna have to say my wife’s cooking, but after that, we’ve got a restaurant here called Mizrahi Grill.”