In a JCRC-NY questionnaire, the congressional hopeful opposed BDS, weeks after telling JI she supported the movement 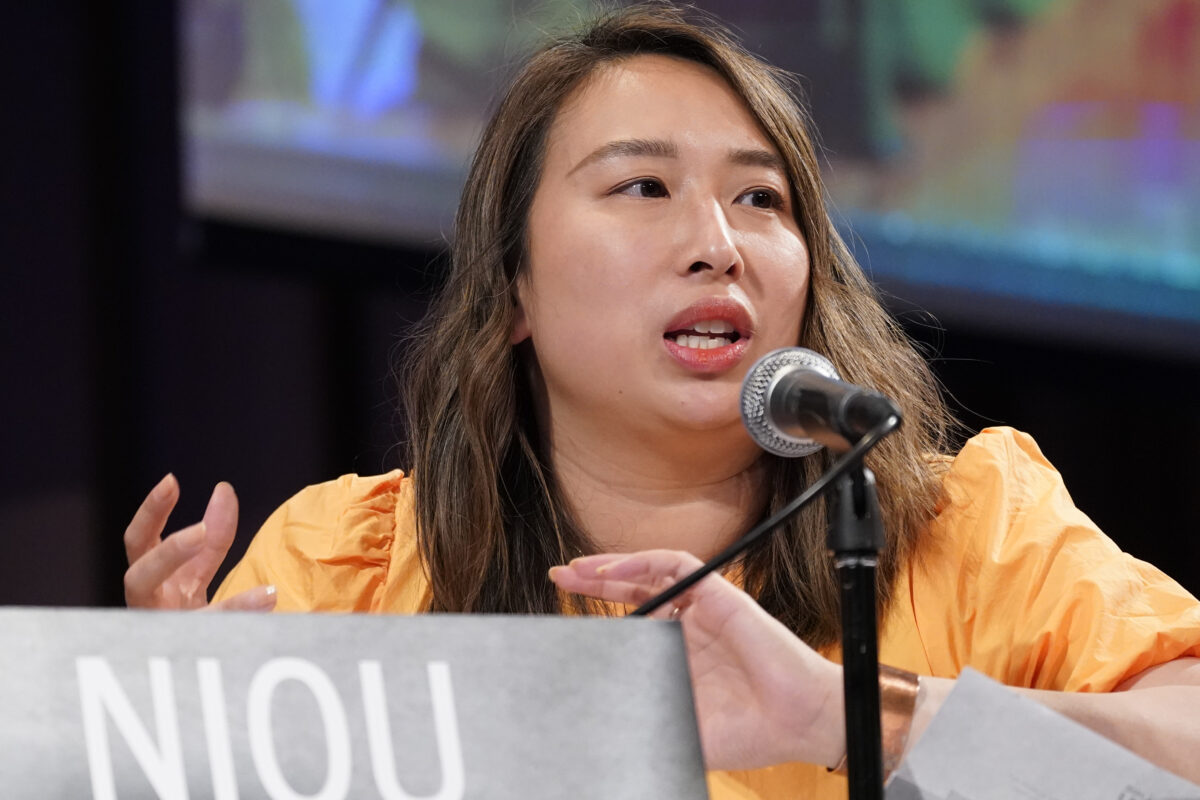 Yuh-Line Niou, a leading progressive candidate in the crowded race for an open House seat in Manhattan and parts of Brooklyn, continued to vacillate on the Boycott, Divestment and Sanctions movement against Israel on Monday, declaring in a questionnaire that she is opposed to BDS even as she endorsed its “commitment to human rights, equality and freedom for everyone in the region.”

“I do not support calls to oppose the BDS movement; at the same time, I do not agree with all of its demands nor do I embrace all of its tactics,” Niou, a New York State assemblywoman who represents the Lower East Side, wrote in the candidate questionnaire, which was solicited by the Jewish Community Relations Council of New York. “No movement is perfect just like no person is perfect.”

Niou’s response was a reversal from the position she had expressed to Jewish Insider last month, when the Manhattan lawmaker stated her explicit support for the BDS movement.

“I believe in the right to protest as a fundamental tenet of western democracy, so I do support BDS,” Niou said in an email to JI, following a phone conversation in which she had hesitated to reveal her own personal view of the movement.

During the interview, Niou had otherwise argued against legislation prohibiting companies that contract with state governments from engaging in boycotts of Israel and, unprompted, pushed back against accusations that the BDS movement is antisemitic because it singles out the Jewish state for punishment.

“People think that the BDS movement is in some way antisemitic, but I don’t think that it is,” she said. “I think that it’s making sure that people can have the right to be able to have free speech.”

While Niou did not clarify whether she agrees with the movement’s goals — which, broadly speaking, seek to place economic pressure on Israel in an effort to change its treatment of the Palestinians — her support for BDS nevertheless drew fierce backlash from Jewish leaders and elected officials in New York City, including one state legislator who withdrew his endorsement of her campaign.

The 39-year-old lawmaker has doubled down on her explanation for supporting BDS in subsequent interviews with media outlets and during a candidate forum in late July held at Congregation Beth Elohim, a Reform synagogue in Park Slope that sits in New York’s redrawn 10th Congressional District, which is home to a sizable Jewish population.

“I support the BDS movement’s right to political speech,” Niou said at the forum, which was co-sponsored by the JCRC, among other Jewish groups. “This includes boycotts and economic pressure, which has been targeted by laws that undermine core First Amendment principles.”

Niou offered similar reasoning in an extensive interview with The New York Times editorial board published on Saturday, but demurred when asked if she herself supports BDS. “I support its right to exist,” she said.

Niou is the only candidate in next Tuesday’s primary who has backed the movement, even as some voters have found her public statements to have been confusingly worded if not deliberately evasive.

Shortly after speaking with JI, Niou met with Orthodox Jewish voters in the district and discussed their concerns over her endorsement of BDS, according to Alexander Rapaport, the founder of Masbia, a network of soup kitchens in New York City, who hosted the conversation at his home in the Brooklyn neighborhood of Borough Park.

Rapaport recalled that those in attendance had explained there is a difference between opposing boycotts of Israel and supporting the free speech rights of those who wish to engage in such efforts — a distinction that Niou’s comments did not seem to establish clearly if that were the sentiment she had hoped to express.

The attendees also told Niou that, in embracing BDS, she was inadvertently using “dog whistles” that “could be inviting” antisemites who hope for Israel’s destruction into her camp, according to Rapaport.

By the end of the meeting, in mid-July, Rapaport said he believed they had settled any uncertainty with Niou’s approach to BDS. His understanding, he told JI, was that she had affirmed her personal objection to boycotting Israel but remained adamant in her support for the First Amendment rights of BDS supporters as well as her opposition to anti-BDS legislation.

“We were expecting an immediate clarification after the meeting,” Rapaport, who is not making an endorsement in the race, told JI. That she refrained from doing so, he said, was “troubling” to those who were in the meeting, particularly as Niou’s campaign has since gained support from critics of Israel who have been accused of espousing antisemitic tropes, including an author who suggested that Israel was behind the Sept. 11 attacks.

The JCRC questionnaire, which Niou submitted on Aug. 6, according to a spokesperson for the organization, is the first instance, it seems, in which she has explicitly rejected BDS. Asked in the survey if she supports the movement, Niou wrote “No,” backtracking on her comments to JI a month earlier.

Still, in a separate question — on whether the U.S. should condition military aid to Israel, which she supports — Niou expanded on her one-word answer. “As the question below about BDS does not allow candidates to elaborate, I’m going to share more here,” she said, noting that she is “adamantly committed to the safety, security and wellbeing of all Jewish people.”

“When it comes to Israel-Palestine, I support the BDS movement’s right to political speech, including boycotts and economic pressure, which has been targeted by laws that undermine core first amendment principles,” Niou added, reiterating her previous comments. “Boycotts are a tried, true, respected and constitutionally protected nonviolent tactic for human rights and social justice movements.”

Informed of Niou’s response on Monday, Rapaport said he was unconvinced by her clarification, even if she had said she opposes the movement. “A plain ‘no’ would be good enough,” he told JI. “Anything after the ‘no’ is a U-turn or a dog whistle, so I don’t know why it’s part of it. Just finish with a ‘no.’”

A spokesperson for Niou’s campaign did not respond to a request for comment from JI.

Elsewhere in the questionnaire, Niou said she would visit Israel if invited by a “non-partisan, not for profit organization” such as the JCRC. “I would be open to attending a trip to Israel if the itinerary included learning from Israelis as well as Palestinians, and if it gives me an opportunity to learn from those on the front lines of the struggle for peace and justice,” she said.

“JCRC-NY created this congressional candidate questionnaire in order to help the members of our community make informed decisions about who is most in line with their values and will best represent them,” Gideon Taylor, the chief executive of JCRC-NY, said in a statement to JI.

Recent polling suggests that Niou is well-positioned in the lead-up to next week’s Democratic primary, where she is facing off against attorney Dan Goldman, City Councilwoman Carlina Rivera and Rep. Mondaire Jones (D-NY), among others.