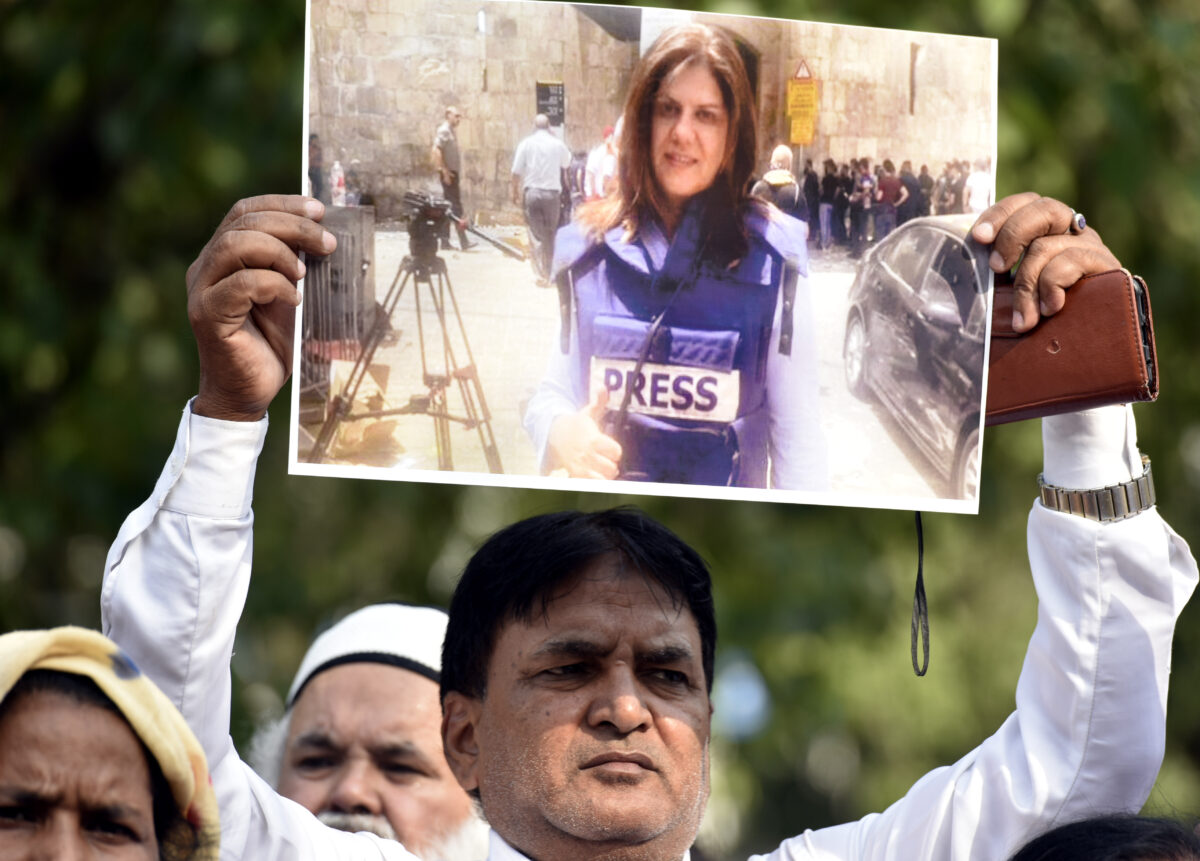 Members of All India Peace and Solidarity Organisation (AIPSO) organised a demonstration against the killing of journalist in Palestine by Israel forces at Connaught Place, on May 13, 2022, in New Delhi, India.

Twenty-four Senate Democrats sent a letter to President Joe Biden on Thursday urging federal officials to “launch an independent investigation under U.S. auspices” into the May death of Palestinian-American journalist Shireen Abu Akleh, joining a group of House colleagues who previously issued a similar call.

Abu Akleh was shot and killed while reporting on an Israeli military raid in the West Bank city of Jenin. The Palestinian Authority and Al Jazeera, which employed Abu Akleh, have blamed Israeli forces for her death.

Israel has said she was killed in an exchange of fire between Israeli troops and Palestinian militants and that it cannot definitively determine the source of the shot, and has called on the Palestinian Authority to hand over the bullet that killed the journalist.

The letter, led by Sen. Chris Van Hollen (D-MD), argues that the U.S. “has an obligation [to] ensure that a comprehensive, impartial, and open investigation into her shooting death is conducted,” and, given that neither Israel nor the PA trust each other to do so, “the only way to achieve that goal is for the United States to be directly involved.”

The senators say that they join the call issued by 57 House Democrats last month for the State Department and FBI to launch an independent investigation of the incident.

The impasse over the bullet, and the Israeli government’s denunciation of the PA’s findings “further underscores the need for the U.S to be directly involved in any investigation,” the letter continues.

The letter also raises concerns about a statement from an Israeli military spokesperson on the day of the shooting that Abu Akleh and her crew “were armed with cameras.”

“We know you agree that journalists must be able to perform their jobs without fear of attack,” the letter’s authors tell Biden. “In order to protect freedom of the press, a thorough and transparent investigation under U.S. auspices must be conducted to get to the truth and provide accountability for the killing of this American citizen and journalist.”

AIPAC actively lobbied against the letter.

“We believe that this letter unfairly implies both Israeli culpability and inability to conduct an objective, thorough investigation of the tragic death of the journalist. Israel has made clear it would welcome United States participation in an investigation and is actively engaged with the U.S.,” AIPAC spokesperson Marshall Wittmann told Jewish Insider. “The letter also fails to acknowledge the underlying reason for the Israeli operation on the day in question. Over the last three months, 19 Israelis have been killed in terrorist attacks. Israeli forces were acting in Jenin to arrest a wanted terrorist. Well over half of the recent terrorist attacks emanated from Jenin.”

Duckworth and Murray, both of whom are up for reelection this year, have been endorsed by AIPAC’s political action committee. Warnock and Van Hollen, who are also up for reelection, have received AIPAC backing.

The letter urges a different approach than than one sent by 24 bipartisan House members earlier this month, which called for an “independent investigation” and urged the PA to turn over the bullet.

State Department spokesperson Ned Price said earlier this week that a U.S.-led investigation is “not on the table at the moment,” urging the two sides to cooperate.