A pro-choice rally at the U.S. Capitol on Tuesday morning, organized by the National Council of Jewish Women, drew more than 2,000 people 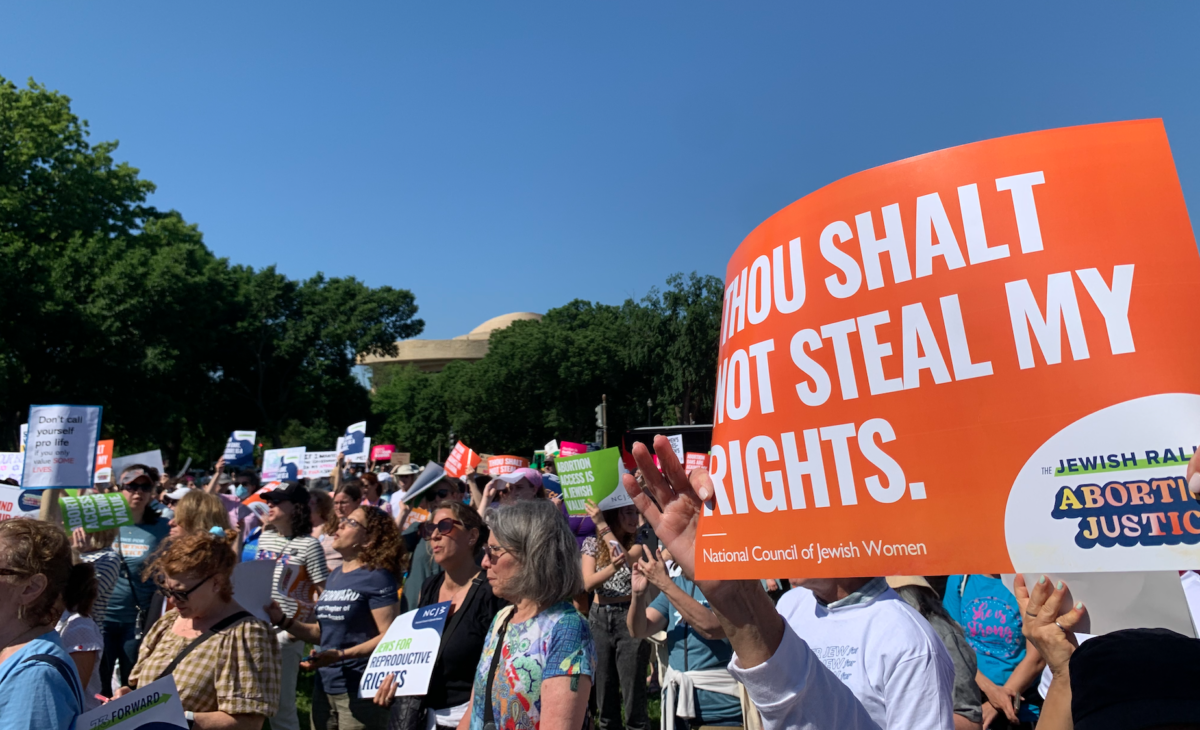 A rally organized by National Council for Jewish Women in Washington, D.C. on Tuesday, May 17, 2022.

Following a weekend of pro-choice rallies that drew hundreds of thousands of people nationwide, several thousand American Jews gathered on Tuesday morning at a rally with a similar message that was organized by the National Council of Jewish Women.

The Jewish Rally for Abortion Justice, which capped off NCJW’s first in-person conference in three years, had been planned for months — well before Politico published a leaked draft of a Supreme Court opinion overturning Roe v. Wade earlier this month, and before the weekend’s events that saw a groundswell of abortion activism.

But that didn’t stop the more than 2,000 people who showed up Tuesday in front of the U.S. Capitol, many of whom also attended rallies on Saturday, to protest in a Jewish context.

“We did want to have a particular Jewish rally for our abortion justice, because we feel that for too long, Jewish voices have been left out of the national conversation on religion and abortion,” NCJW CEO Sheila Katz told Jewish Insider after the rally. “It was important for us to have this set and to have a unified voice, and to make sure we had every denomination of Judaism represented.”

“I come here as a decisor of Jewish law, of halacha, to tell you that halacha does not believe that life starts with conception. Halacha believes that full life and personhood begin at birth,” said Rabbi Dov Linzer, president and rosh yeshiva of the Yeshivat Chovevei Torah Rabbinical School. “Banning abortion treats women like children. Banning abortion prevents women from acting as responsible moral and religious agents.”

Jews support abortion rights more than any other single religious group, according to a 2014 Pew Research Center poll that found that 83% of American Jews think abortion should be legal in most or all cases. Different Jewish denominations approach abortion differently, but even many Orthodox interpretations find that it is acceptable in certain situations. A small group of ultra-Orthodox Jews protested the rally, holding signs claiming Jewish law opposes abortion.

Speaking after Linzer, Rep. Debbie Wasserman Schultz (D-FL) told attendees, “As the rabbi said, abortion access is a Jewish value,” she said. “Banning abortions is an issue of religious freedom in the Jewish faith. One of our most important tenants is L’dor v’dor, from generation to generation, and this fight more than any other is a generational fight.”

“Our people showed up today,” said Rabbi Jonah Pesner, executive director of the Religious Action Center of Reform Judaism. Dozens of other Jewish organizations partnered with NCJW on the event, including synagogues around the country and the Anti-Defamation League, Hillel International and the Jewish Council for Public Affairs.

Synagogues in Rhode Island, New York, New Jersey and Pennsylvania arranged buses to bring in supporters for Tuesday’s rally, and others flew in from Ohio and Michigan. “It felt really special that people got on cars, buses [and] trains to come here,” said Katz. There were also a lot of kids with their parents, and gender and racial diversity. “It felt like, when we looked out, we saw the full diversity of the Jewish community.”

Abortion access was a major focus at the NCJW Washington Institute conference, which drew 450 attendees to the Capital Hilton near the White House. One of the most popular offerings, Katz noted, was a workshop that trained people to talk about their own personal experiences with abortion. “It was really beautiful to get to see the word ‘abortion’ not have stigma in our space,” she said.

Donations to NCJW have increased since news of the Roe v. Wade draft opinion broke, although Katz declined to offer specific figures. The organization also announced this weekend the launch of a fund that will support women who want to get abortions.

“People are fired up and want to know how they can help right now,” Katz said. The Jewish Fund for Abortion Access is a partnership with the National Abortion Federation, a national organization that pays for abortion procedures for women who can’t afford it and helps them travel across state lines when the procedure is outlawed in their state. “We hope to raise as much money as humanly possible to be able to help people get abortion care in this country,” said Katz.

This year’s conference marked the first time NCJW, which is primarily focused on issues relating to women, children and families, held a session on antisemitism at its Washington conference. Speakers included Assistant Attorney General for Civil Rights Kristen Clarke, Rep. Kathy Manning (D-NC) and Special Envoy to Monitor and Combat Antisemitism Deborah Lipstadt, who addressed the group in one of her first public appearances in her role.

“It was important for us to have a session on antisemitism because we’re experiencing so much in the progressive spaces that we’re in and and generally as Jews in the world,” said Katz.

One of the sponsors for the conference was Ben & Jerry’s, a company known for its longtime support of progressive causes. The ice cream maker was criticized by many leaders in the U.S. Jewish community last year after vowing not to sell its products in what it called “Occupied Palestinian Territory.”

Katz said Ben & Jerry’s has sponsored NCJW’s conference for the last five years, and that she has not talked to the company about its stance on Israel. “They’ve been ongoing supporters from the corporate side,” said Katz. “We didn’t not do stuff on Israel” because of Ben & Jerry’s, she said. Katz pointed out that “every workshop had sessions about Israel and building a feminist field in Israel, so that’s important work for us. It’s one of our core issues.”