On Roe, a potential split between Orthodox Jewish groups and conservatives 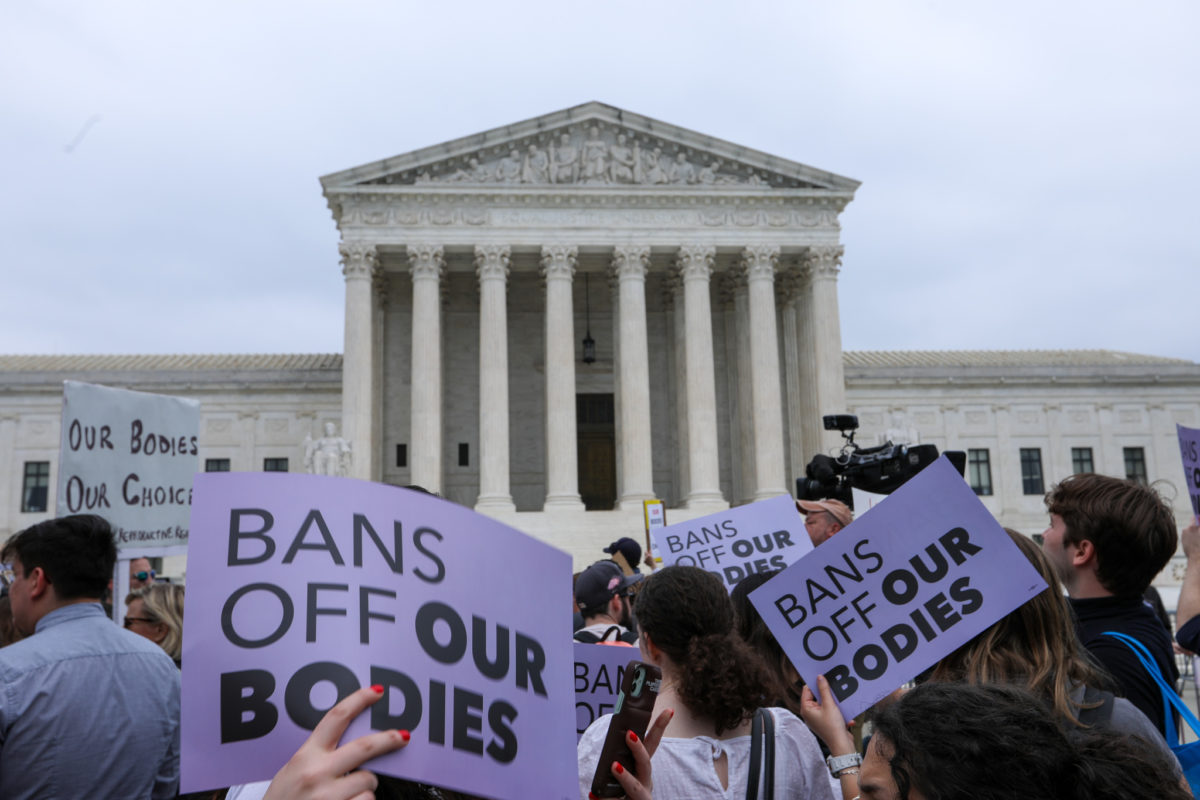 Activists rally outside the U.S. Supreme Court in Washington, D.C., on May 3.,2022., Tuesday after the leak of a draft majority opinion preparing for the court to overturn the landmark abortion decision in Roe v. Wade. (Photo by Yasin Ozturk/Anadolu Agency via Getty Images)

Orthodox Jewish groups have frequently found themselves aligned with Christian conservatives at the Supreme Court on religious liberty issues. But Monday night’s leaked draft opinion indicating that the Court is set to overturn Roe v. Wade brings into focus one area of potential difference between the frequent allies.

Christian conservatives have led the anti-abortion movement in the U.S. for decades and pushed for the Court to overturn Roe, the 1973 decision that said the Constitution gives women the right to choose whether to have an abortion.

Jewish interpretations of the Biblical literature on abortion vary, although many Orthodox interpretations dictate that it is allowable or necessary when the pregnancy endangers the mother’s life — including in some mental health emergencies. Jewish law also diverges from conservative Christian beliefs that life begins at conception.

As a result, Orthodox Jewish positions on abortion — and the responses of Orthodox Jews to the overturning of Roe — may not line up neatly with those of Christian conservatives.

Abba Cohen, the vice president for government affairs for Agudath Israel of America, told Jewish Insider that the group had no comment on the leaked opinion and “can finalize no specific advocacy action” in response to the draft, but said that “the Jewish perspective on abortion is nuanced.”

He went on to explain that the Haredi group would have to review how the decision would treat specific circumstances before announcing a firm position on it.

“We would have to review the precise nuances of the final decision itself — how, for example, it treats abortion rights when the ‘mother’s life or health is endangered’ or when the ‘mother’s sincerely held religious beliefs allow or require’ her to seek an abortion,” Cohen continued. “We would also have to carefully examine state statutes and prospective legislation on these matters. Only then can we responsibly determine the true impact of the Dobbs decision and future steps we might deem necessary,” he said, referring to the Mississippi case now before the Court, Dobbs v. Jackson Women’s Health Organization.

In a statement on Tuesday evening, the Orthodox Union’s leadership said it “is unable to either mourn or celebrate” the news, explaining that the group does not support absolute abortion bans nor abortions when not medically necessary.

The statement describes “abortion on demand — ’the right to choose’” as “completely at odds with our religious and halachic values” and said, “legislation and court rulings that enshrine such rights concern us deeply on a societal level.”

“Jewish law prioritizes the life of the pregnant mother over the life of the fetus such that where the pregnancy critically endangers the physical health or mental health of the mother, an abortion may be authorized, if not mandated, by Halacha and should be available to all women irrespective of their economic status,” the statement reads. “Legislation and court rulings — federally or in any state — that absolutely ban abortion without regard for the health of the mother would literally limit our ability to live our lives in accordance with our responsibility to preserve life.”

The statement further decries the “extreme polarization and politicization” of abortion.

“Human life — the value of everyone created in the Divine Image — is far too important to be treated as a political football,” it continues.

Other research has indicated significant support for the legality of abortion among Jews at different levels of religious observance — a Pew Research Center study from 2014 found that 62% of Jews who pray at least daily and 58% of Jews who attend religious services at least weekly believe abortion should be legal in most or all cases. The survey did not specifically break down the data by denomination, but most Jews who pray daily identify as Orthodox.

The issue is also a potential point of friction for Republican Jews. The 2014 Pew study found that 67% of Jewish Republicans and 58% of Jews who identified as politically conservative believe abortion should be legal.

At large, Jews are the most supportive of abortion rights of any U.S. religious group measured by Pew — 83% of Jews support a woman’s right to choose in all or most cases.

Amy Adamczyk, a professor of sociology at the John Jay College of Criminal Justice who studies issues related to abortion, religion and public opinion, noted that the small size of the Jewish community has made its internal differences on the issue of abortion difficult to measure.

She said that Jews tend to be the most liberal religious group overall, but said globally, views on abortion are generally shaped more by the importance people place on their religion than what religion they follow.

Sheila Katz, the CEO of the National Council of Jewish Women — the most prominent Jewish community organization in the pro-choice movement  — said her group is working with some prominent Orthodox rabbis.

She acknowledged the Orthodox community generally takes a more restrictive view of abortion than NCJW, but added, “the reality is there are seats for everyone at this table because this fight actually is about that too… There’s space for everyone, including those who care deeply about religious freedom issues.”

Katz’s organization — which supports broad abortion access — and other liberal Jewish groups have long fought to frame abortion rights as a matter of Jewish religious freedom, as well as an issue tied to Jewish values and social justice.

“This is a moment where the Supreme Court is very likely going to dictate when life begins based on one religion’s perception of that — that’s not OK,” Katz told JI. “And Jews should be able to get an abortion if they want one.”

The Conservative movement’s Rabbinical Assembly, the Religious Action Center of Reform Judaism, the Jewish Democratic Coalition of America and the American Jewish Congress have also spoken against the anticipated Supreme Court decision.

One prominent Jewish voice in the legal community urged caution about the leaked opinion itself.

Contrary to general assumptions about the document, Nathan Lewin, a seasoned constitutional lawyer who clerked for and has argued before the Supreme Court on numerous occasions, cast doubt on the notion that Alito’s leaked opinion would be reflective of the Supreme Court’s actual decision.

“I think the proposition that this is what the Court will do is wrong,” Lewin told JI.

“It is an early statement of what Justice Alito believes the Court should do. I think it is comparable to the long opinion that Alito wrote in the religious-liberty Fulton case (to overrule [Employment Division] v. Smith),” he continued. “As was true in Fulton, it may end up being a concurring opinion when the Court’s internal process is concluded and the case is decided.”

Lewin was referring to the decision last year in Fulton v. City of Philadelphia, in which Alito wrote a concurrence — joined by Justices Clarence Thomas and Neal Gorsuch — which argued the Court should have gone further to overturn a past precedent on religious liberty issues.

Lewin said that he could see other justices — Thomas and possibly Gorsuch  — joining Alito’s opinion in this case, but argued, “the document does not indicate that any justice joined it.” Even if the Court does overturn Roe this summer, the leaked opinion written by Alito may be a concurrence. The official Court opinion could use different logic, or reach a more limited conclusion.

“I think Alito probably did the same thing with regard to [Employment Division] v. Smith but he did not get Kavanaugh and Barrett to agree with him on that,” he said. “So I think, as of February 10, he may have circulated this on the hope, on the expectation that he might get a majority of the court to sign on to it. But I don’t know what’s happened since February.”

He noted that the case was argued on Dec. 1, 2021, and the leaked opinion is dated Feb. 10, 2022, which “shows an awful lot of work that could not have been done between December 1 and February 10,” explaining that Alito has likely been preparing this since before oral arguments.

He also called the leak an “outrageous breach” of Court confidentiality and said that the leaker “should certainly never be able to practice as a lawyer,” attributing to them “a very sinister motive” to place public pressure on the justices.