Michael Gerald, a pastor and corrections official, enters Democratic primary in NY House race, painting the incumbent as out of touch and too ideological 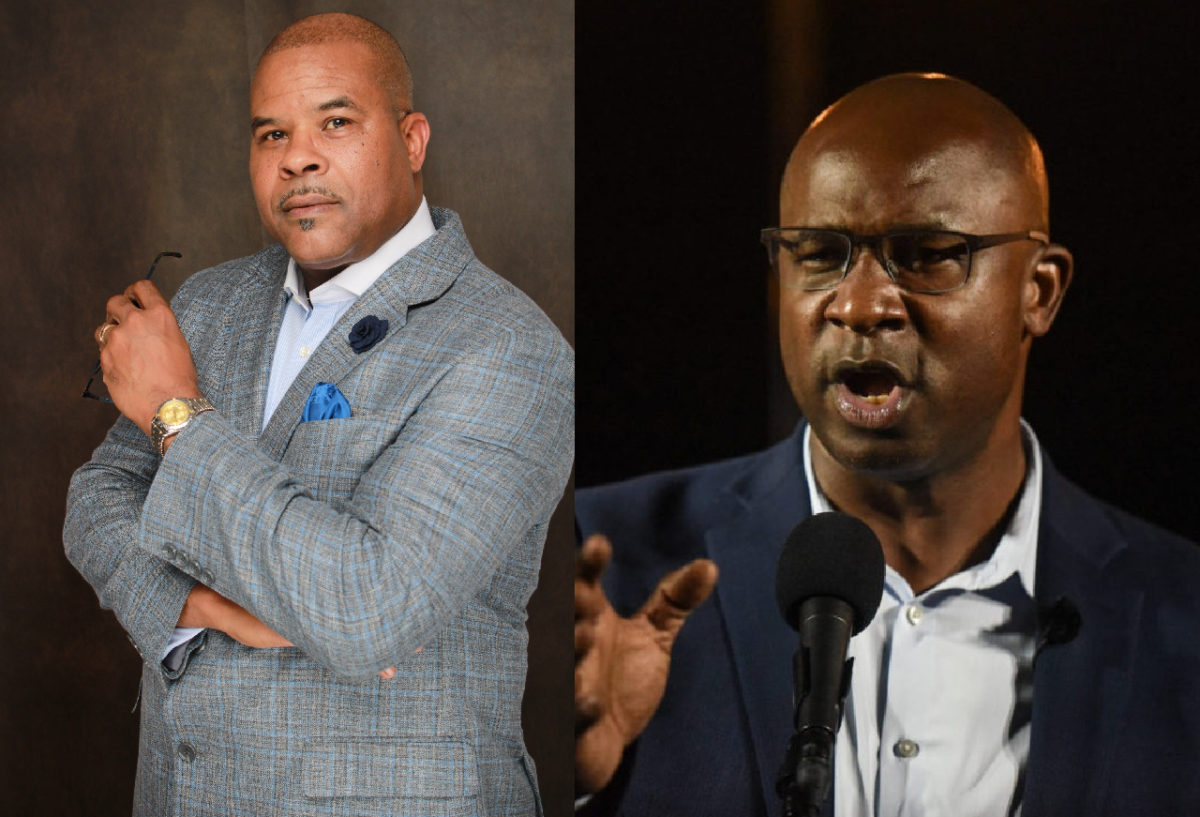 In his first interview as a candidate, Gerald said he is running largely because he believes that Bowman, a freshman representative who is among the most high-profile progressive lawmakers in the House, has been absent from the district during his first term.

“Rather than the congressman focusing his attention on solving the issues of our district, he would rather turn his attention to making a national name for himself,” Gerald, 54, said in a phone conversation with Jewish Insider on Friday. “He’s not getting anything done for us.”

Echoing criticism voiced by the two other challengers in the race, Gerald suggested that Bowman’s policy views — including on infrastructure spending, police funding and the Israeli-Palestinian conflict — have been unproductive and out of touch with voters’ priorities.

The argument may resonate somewhat as Bowman seeks reelection in a redrawn district that now includes a sizable new portion of traditionally moderate voters further north in Westchester and Putnam County.

And some experts have speculated that Gerald, a former law enforcement official who identifies as a moderate and, like Bowman, is Black, could become viable if he proves capable of shoring up voter support — and campaign contributions — in the coming weeks.

In conversation with JI, Gerald took particular issue with Bowman’s support for defunding the police as well as his “present” vote last May on a Capitol Police funding bill. “That’s a clever way of skirting your responsibility,” Gerald said of the vote. “But it’s also very telling that he really doesn’t give a darn about the police.”

“The fact of the matter is that we should never abandon our men and women in law enforcement,” said Gerald, who worked as a New Jersey state trooper and as a county undersheriff before he became a full-time pastor in 2007. “I really take issue with folks who indiscriminately say we ought to defund the police.”

Gerald, who opposes such measures, acknowledges that “many police officers have no experience with the population they are policing,” and he draws on his work in the Westchester County Department of Correction as a possible model for reform. If elected, he says he would advocate for police training to include a portion of time “spent in jails,” where he says officers must “use certain tools of de-escalation” in order to “understand how to deal with a particular population.”

In jail, “you have to be good with your reasoning, your verbal commands and all of that,” he explained. “Correction officers just don’t have weapons, so I think that that would be one of the things that I would introduce as a national standard.”

More broadly, Gerald argues that Bowman’s rhetoric has created unnecessary divisions within the Democratic Party over a policy that he views as ill-defined. “I think that we need to calibrate our language just a little bit and use statements that are more beneficial to what you’re trying to articulate,” he said. “If you really mean that the police need more training or the police need more sensitivity around certain issues in groups, then let’s say that.”

Bowman’s campaign did not respond to a request for comment.

Gerald also criticized Bowman’s decision to vote against the $1 trillion infrastructure package, which passed the House by an overwhelming margin last November. Bowman, 45, was among a handful of left-leaning “Squad” members who opposed the funding at the time of the vote, arguing that the legislation was inseparable from a broader social safety net and climate bill that remains stalled in the Senate.

For his part, Gerald, who said he would have voted in favor of the infrastructure bill, took issue with Bowman’s position. “All of these ideological wars seem to be sabotaging our efforts at governing,” said Gerald. “I think his inexperience as a politician is coming through.”

Such allegations seem designed to flip the script on a narrative that Bowman successfully used to his advantage in his 2020 primary upset over former longtime Rep. Eliot Engel (D-NY), who had been accused of ignoring the needs of his constituents at the beginning of the pandemic.

“The same thing he accused Eliot of, he’s now doing,” Gerald said of Bowman. “He’s not really bringing home money to this district.”

Citing local concerns such as a crumbling sewer system in Mount Vernon and affordable housing woes in White Plains, the reverend expressed frustration over a list of problems that he says have gone unaddressed throughout Bowman’s brief tenure in Congress.

“He claims to have gotten stuff done for flood victims in Tuckahoe,” Gerald said of his hometown in southern Westchester, where he has served as a minister for 10 years. “But really, man, nothing has gotten done, not much anyway, not much other than what normally would have been done.”

Gerald accused Bowman of instead proposing “legislation that doesn’t have any chance of making it to the floor,” including a $1.4 trillion education package, billed as a “Green New Deal for Public Schools,” the former Bronx principal introduced to the House last summer.

The pastor singled out Bowman’s recent announcement that he would pull his support for and vote against bipartisan legislation aimed at strengthening and expanding the Abraham Accords — which established diplomatic ties between Israel and a number of Arab nations — as similarly ineffective if also equally ill-advised.

“I think that’s foolish,” Gerald said of Bowman’s reversal on the Israel Relations Normalization Act, which has 328 House cosponsors. “He said that it somehow further impacted the Palestinian people. I think an agreement that would go on record and have all of these countries participating demonstrates that we can, despite our differences, work together, and become much more civilized in both our politics and our policy. I think it was tragic.”

Gerald characterized the about-face, which angered Jewish constituents in his district, who make up a key constituency, as further proof that Bowman “is fighting an ideological war.”

“He’s pretty much saying ‘I don’t give a F about what you think’ to people who are constituents,” Gerald alleged, “and I think that’s disrespectful. But it also just shows you the brazenness of his group of congresspeople.”

The longtime minister described himself as a strong supporter of Israel. “Part of my appreciation for Israel has to do with my faith,” said Gerald, who visited the Jewish state during his time as a student at the Princeton Theological Seminary in the late ’90s. “I’m a follower of a Jewish young man whose name was Jesus.”

“I admire the fact that Israel, as a young nation-state, is progressing in so many different ways, technologically and even militarily,” Gerald added, noting that his experience as a state trooper had deepened his “appreciation” for the U.S.-Israel relationship. “We shared intelligence, and that’s really why and how I’ve become so acquainted with Israel.”

“I would keep the funding levels where they are, and if need be, increase them,” he said. “I think Israel is one of the most important allies that we have in the Middle East because the information gathering that we have and the intelligence that we share is crucial to maintaining not only peace for America but world peace. I think there’s a shared and collective destiny that we may realize with our Jewish brothers and sisters.”

Gerald is opposed to the Boycott, Divestment and Sanctions (BDS) movement  targeting Israel, which he believes can be antisemitic. Bowman also rejects the movement and voted for Iron Dome funding last September in a contentious House vote.

But Gerald argues that the congressman’s affiliation with the Democratic Socialists of America, which supports BDS — and recently voiced support for withdrawing from NATO amid escalating violence between Ukraine and Russia — has put Bowman in a somewhat untenable position, even as the DSA announced in December that it would not endorse him because of disagreements over his approach to Israel. “This is the kind of stuff that’s just mind-boggling,” Gerald said. “I just think that he’s the wrong person for the district.”

Gerald grew up in Trenton, N.J., and served as a state trooper between 1987 and 2001. After a back injury, he was appointed as an undersheriff in Mercer County, a position he held for five years before heading south, where he worked as a senior pastor at Hill Chapel Baptist Church in Athens, Ga., until 2012.

Gerald filed with the Federal Election Commission last week and said he is currently in the process of gathering signatures so his name will appear on the ballot in the June primary.

In addition to Gerald, the field includes Vedat Gashi, a Westchester County legislator in Yorktown, and Manuel Casanova, a former political strategist and businessman in New Rochelle. Other potential candidates have been rumored to be mulling bids as well.

But the reverend’s candidacy in particular seems to have raised Bowman’s receptors. On Friday afternoon, Gerald said he met with Bowman in the district at the congressman’s request.

“He did most of the talking,” Gerald said of their 40-minute conversation, which he characterized as cordial. “He told me about his platform, his agenda, his passion about working for those marginalized folks on the periphery.”

But the first-time candidate said he left the conversation convinced he had made the right choice by entering the race.