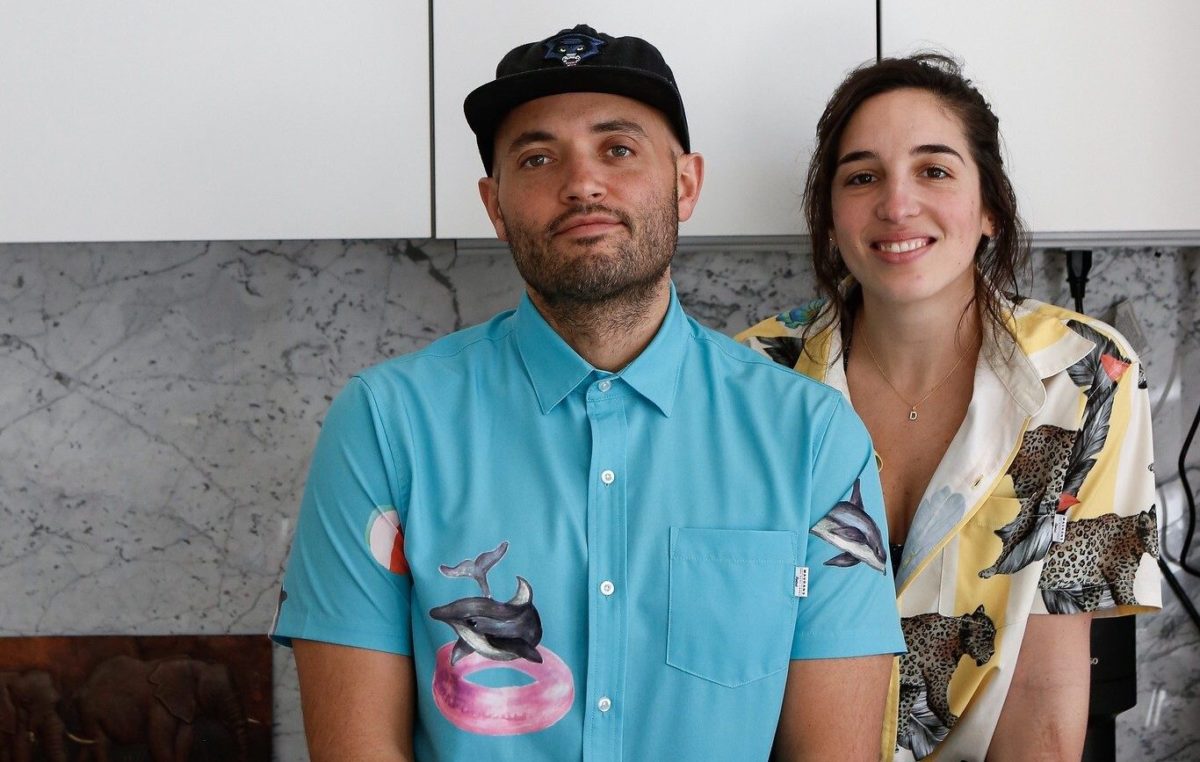 Take the King’s Point sandwich, which is named for an iconic retirement community near Fort Lauderdale but contains fillings that would likely shock many King’s Point residents: nacho jalapeño cream cheese, bacon and crispy shallots on a cheddar bagel. At each of the local chain’s six locations — a major expansion from the lone shop it had at the start of the pandemic — visitors are greeted with a bright pink-and-teal color scheme, which founder Andrew Dana describes as “Boca meets Brooklyn.”

“We’ve had some people come in expecting chopped liver and a lettuce wrap, and that’s not really what we’re doing,” Dana told Jewish Insider in an interview at Call Your Mother’s newest location in Yours Truly DC, a hotel in the District’s Foggy Bottom neighborhood. A seventh location will open this spring in Logan Circle, joining spots in Capitol Hill, Georgetown, the original in Park View and two in Bethesda.

The chain, which has won accolades from food publications and chefs around the country, got the ultimate seal of approval for Beltway types last year: President Joe Biden visited the Georgetown location for a sesame bagel with cream cheese just days after his inauguration, the first, and one of the only, Washington restaurants he visited since becoming president. Jeff Zients, the White House COVID-⁠19 response coordinator, was an original investor in and co-owner of Call Your Mother, but Dana said he divested from the company when he joined the Biden administration.

Before Call Your Mother existed, Washingtonians had a habit of kvetching about the lack of good bagels in the nation’s capital. When the restaurant opened its first location in the Park View neighborhood in 2018, it became something of a sensation. Lines snaked around the block every weekend morning, all year long.

“We’re sort of always keeping our ear to the streets and looking for what neighborhoods are ‘bagel deserts’ and where can we go next,” said Dana, 35, who grew up near Park View in Mt. Pleasant. The original location is seven blocks from his childhood home, where his parents still live. He calls his mother almost daily, and he often leaves his dog with her as he runs between the restaurants each day.

“I wanted the name to be something just fun and playful, and so I was sitting around the table with a bunch of my friends, who were saying, like, ‘What’s something funny your Jewish grandmother would have yelled at you?’” Dana recalled of the process of naming the company. “Somebody said, like, ‘You should eat something.’ And then my other friend yelled, ‘Call your mother,’ and I just said, ‘Holy s***.’ It was just, like, the aha moment.”

Dana’s business partner and then-girlfriend (and now-wife) Daniela Moreira, who is not Jewish, instantly liked the name, too. “It spans other cultures. Dani is from Argentina. And she’s like, ‘Oh my God, my mom will love this too,’” Dana noted.

Dana and Moreira, 31, met at an early iteration of Dana’s first culinary venture — Timber Pizza, another D.C. hotspot. Timber began as a mobile wood-fired pizza oven, and the pair met when both were purchasing eggs at a farmers market where the pizza truck was set up. Timber’s brick-and-mortar restaurant is located on the same street as Call Your Mother in Park View.

Baking was not a big part of Dana’s childhood, but bagels were. Every weekend, his dad picked up an assortment from a now-closed shop in Cleveland Park. “He would toast bagels on the weekends, and that was about it” for his cooking abilities, said Dana. “My dad is a lawyer, like a lot of dads in D.C. But growing up, he used to always say to me, ‘Oh, I should have opened a Jewish deli.’”

Like Call Your Mother, Timber has won plenty of praise in the culinary world, including a spot on Bon Appetit’s 50 best new restaurants list in the U.S. in 2017. That recognition comes despite the fact that Dana has no formal baking experience, aside from some bread experiments in college. He has an MBA and spent his years at an advertising technology startup co-opting his dad’s mantra — “I should have opened a pizza restaurant,” he would say, rather than his dad’s dream of opening a bagel shop.

“When it was good, it was really good,” Dana said of Timber’s food before Moreira, who was trained at the Culinary Institute of America, joined the team. But, he added, “there were days where we forgot to put the yeast in the dough, or days [where] we put too much yeast in the dough. So there were some consistency issues.”

Amid that early buzz about Timber Pizza, Dana and Moreira began looking for another opportunity, although they are still involved at Timber. “After the dust settled, we were ready for the next challenge. Part of it is, we have a deep love for carbohydrates,” Dana explained. “My dad, his dream was in my ear. I have a deep, deep love for bagels. I had a bagel almost every day when I was in grad school. I lost 10 pounds when I moved back here just breaking that habit.”

Moreira had never had a bagel before, which gave her a blank slate that allowed the pair to begin concocting unique, memorable sandwiches. Yes, patrons can order an everything bagel with all the trappings of Manhattan — cream cheese, lox, capers, tomatoes, cucumbers, red onions — but the menu at this self-described “Jew-ish” deli has much more than that. (This reporter’s favorites are the Horizon, with smashed avocado, Fritos, red onion and jalapeños on an everything bagel; and the Gleneagle, with candied salmon cream cheese, cucumbers, crispy shallots and greens on a Za’atar bagel.)

“My true Jewish deli experience was rooted in me visiting my grandparents in Delray and Boca growing up,” said Dana of his Jewish grandparents who lived in a community called Gleneagles.

“Gleneagles was, like, the most fun place in the world to visit when you’re growing up. There’s tennis and golf and buffets and all this stuff. So it was just, like, the memories of that. It’s the most fun,” Dana explained. “From the get-go, I knew I wanted this brand to be fun and not too serious.”

That whimsical approach to Jewish cuisine is not apparent only in the bagels. The deli, which changes its menu frequently and seasonally, used to sell black and white alfajores, combining the Jewish deli staple with a sandwich cookie popular in Argentina. Last year on Passover, Call Your Mother, which is not kosher, offered brisket pastrami tacos, and it is currently selling dulce de leche hamantaschen for Purim.

Some of those ideas come from Moreira, who is new to Jewish cuisine, but they are also inspired by Dana’s own Jew-ish upbringing. His mother is Presbyterian, and while he was raised more in line with his father’s faith, he learned from both.

“I would go from having a tongue sandwich on rye with my grandfather to a Honey Baked Ham with my other grandparents,” Dana said. “I never felt a connection to my Presbyterian roots. But I certainly grew up in this blended household.” High Holidays always involved meals at the home of his next-door neighbor, a “huge hippy” who always served meat, bean and cheese enchiladas on Rosh Hashanah.

One major reason for Call Your Mother’s eclectic menu is a simple business calculation (though Dana, who largely works off feel and instinct rather than market research, probably would not use this term): competitive advantage.

“We were like, ‘Let’s not do super classic stuff,’ because even if we make the best matzah ball soup, everybody will always say, ‘Oh, my grandmother’s was better,’ or something like that,” explained Dana.

But comfort food is definitely a motivation for Call Your Mother. That specialty has helped the restaurant throughout the COVID-19 pandemic, which has been a boon for the growing chain. “All of our locations, for the most part, are in residential areas, and people were home,” said Dana. “It’s comfort food that people get and know, and it’s perfect for takeout.”

The seventh location in Logan Circle will open this spring, depending on permitting, said Dana. And more could be on the way.