Running against DSA member, Texas’s Eddie Rodriguez pitches himself as a ‘progressive that actually makes progress’

Rodriguez broke through to the national stage last year when he led a delegation of Texas state lawmakers to Washington, D.C., to lobby Congress on voting legislation and block a quorum in the state legislature 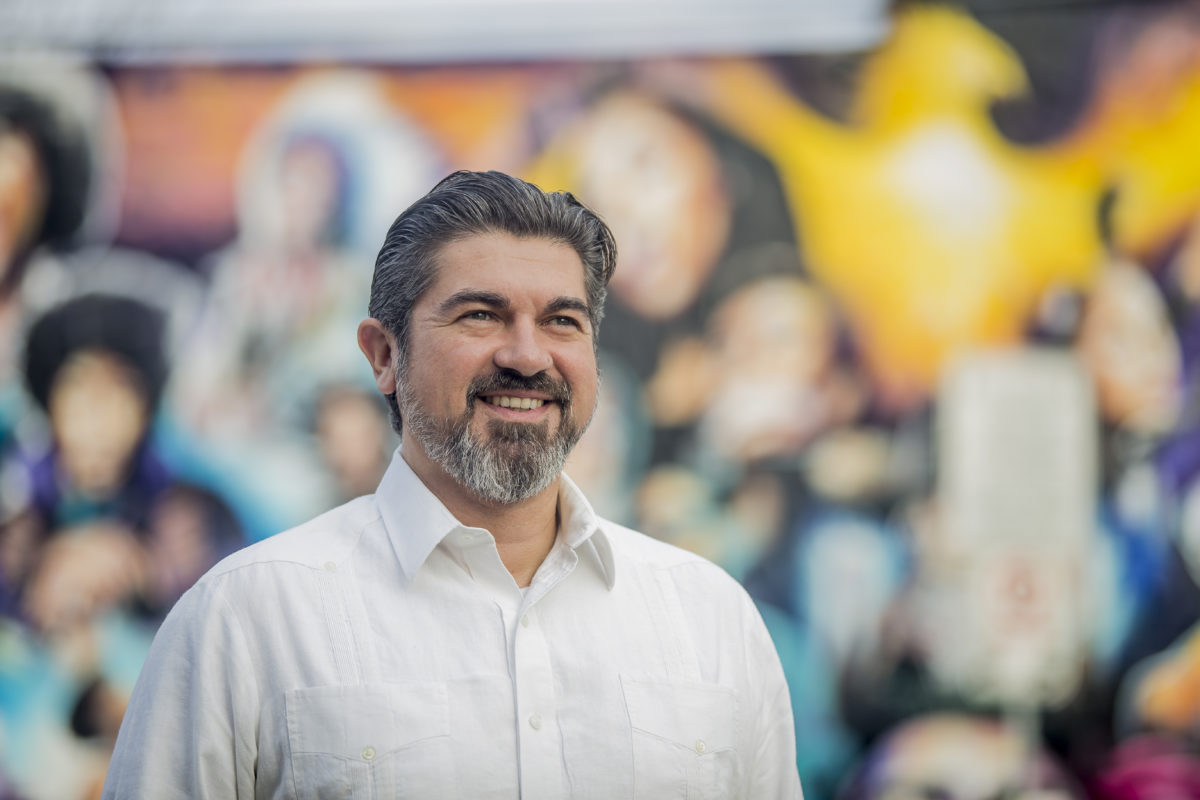 With Texas’ primary elections less than two months away, state Rep. Eddie Rodriguez is working to carve out a lane in the competitive Democratic primary race in the state’s 35th Congressional District, which includes parts of both Austin and San Antonio, a now-open seat following the state’s redistricting.

Up against a San Antonio city councilwoman and a Democratic Socialist member of the Austin City Council known as a prominent advocate for a range of left-wing policies, Rodriguez is hoping to position himself as a “progressive that actually makes progress,” pointing to his long record in state government.

Rodriguez has served in the Texas state House for nearly 20 years, but broke through to the national stage last year when he led a delegation of Texas state lawmakers to Washington, D.C., to lobby Congress on voting legislation and block a quorum in the state legislature on restrictive voting laws being advanced by Texas Republicans.

“It was really impactful to me… All the battles that I’ve fought here in Texas, they can be won or lost at the national level,” Rodriguez said in an interview with Jewish Insider last week, reflecting on the delegation to D.C. “I could see that these folks have the power to make the change, to do what they need to do to help constituents back home.”

Rodriguez said his priorities in Congress would include enhancing economic and educational opportunities — the American Dream is “quickly fading for a lot of working-class Americans,” he told JI, as well as voting rights, tax policy and veterans’ affairs (San Antonio is home to a major military installation).

The primary race will conclude in just over a month on Texas’s March 1 primary, although the top two candidates will go to a runoff if none reaches 50% support. The district is deeply Democratic, meaning that whoever wins the district is virtually guaranteed a seat in the 118th Congress. The district’s population is majority Hispanic.

While the Senate blocked Democrats’ voting rights legislation and the voting bills Rodriguez aimed to stop were signed into law in Texas, he said, “We did accomplish what we wanted to do, which was to really draw attention to the issue.”

He was hesitant to classify President Joe Biden’s first year in office as a success.

“He could have been better. I want him to do better,” Rodriguez said. “I think that there was an opportunity there for [the] Build Back Better [legislation] — to at least try to find pieces of Build Back Better that maybe could pass — and he needed to weigh in on voting rights a lot sooner than I think he did.”

The longtime state lawmaker said his experience in Texas’ Republican-controlled state legislature would make him a stronger member of the House.

“I’ve been in the minority and, despite that, passed legislation that really helps people,” he said. “I’m actually seen, I think, by my Republican colleagues as a serious member who they want to work with… It’s been extremely partisan in the Texas House as well. So it’s not going to be new to me.”

He contrasted that experience with his opponents, Greg Casar and Rebecca Viagran, both of whom have served on predominantly Democratic city councils in Austin and San Antonio, respectively.

Rodriguez went on the attack in particular against Casar, the Democratic Socialist endorsed by Sen. Elizabeth Warren (D-MA), Rep. Alexandria Ocasio-Cortez and groups like the Justice Democrats and the Congressional Progressive Caucus. Rodriguez is backed by the New Democrat Coalition, a caucus of centrist congressional Democrats.

There has not yet been any independent polling in this race, but two polls conducted by Casar’s campaign show him leading Rodriguez by more than 20 points. Rodriguez said his campaign’s polls show a much closer race, but the campaign declined to make their findings public. 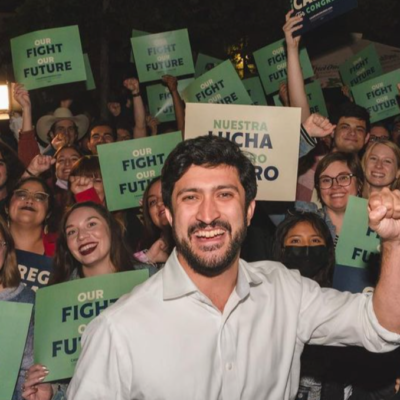 Rodriguez described Casar’s vocal advocacy for cutting the Austin police department budget as “a level of irresponsibility that we cannot have in the [U.S.] House,” blaming that advocacy for damaging state House colleagues’ chances of reelection.

Rodriguez warned that some in the Democratic Party have also gone “too far to the left” in a way that is “ultimately going to be hurting our party” on Israel policy.

“The United States, and in particular its elected leaders in Congress, must state unequivocal, full-throated support for Israel. Anything less is dangerous, unethical and counter-productive to peace,” Rodriguez said in a policy paper on Israel provided to JI. “Political space between the US and Israel has real ramifications by emboldening Israel’s and America’s enemies, restricting progress of the peace process, and endangering countless civilian lives.”

He recounted in his interview that his affinity for Israel grew during a 2009 trip to the Jewish state, organized by the Anti-Defamation League for about 20 Hispanic lawmakers from across the country.

“My family’s been in South Texas since before Texas was Texas, frankly… We were in the majority as far as Hispanics in McAllen, but the white folks there in McAllen, they ran the show, they ran everything,” he said. “When I was in Israel, I really saw with the [Israeli] people there, they felt that’s where they’re from, that’s where they’ve been for thousands of years and yet they’re surrounded by people that don’t want them there.”

Rodriguez said a Shabbat dinner in Haifa, after which he surveyed destruction from Syrian missile attacks on Israel, left and impact on him.

“I just felt a great deal of camaraderie and connection with the people there,” he said. The group also visited Tel Aviv, the Knesset, religious sites and Israeli industrial sites.

Rodriguez said he supports ensuring that Israel maintains its qualitative military edge in the region and would have backed supplemental funding for Israel’s Iron Dome missile-defense system if he had been in Congress last year. He also expressed support for expanded U.S.-Israel economic and technological cooperation.

“We need to make sure that Israel continues to exist, and if we’re going to be Israel’s ally, we need to protect her and defend her whenever we can,” he said. “This country is our best friend in the region and we have to take care of it… It was really clear to me that people in Israel — there’s always a risk that they feel.”

Rodriguez’s position paper describes U.S. support for Israel as “pivotal in demonstrating to willing neighbors the benefits of recognizing Israel while showing foes that there is a cost to the opposite approach.”

Rodriguez told JI he’s a supporter of a two-state solution to the Israeli-Palestinian conflict and said the U.S. should serve as a “broker,” but also firmly supports Israel and “how they want to do it” in any potential negotiations.

“[A Palestinian state] has to be something that Israel can live with,” he continued.

The Texas lawmaker added that he’s seen little support from Palestinian leadership for a two-state solution, and said that — while he supports the current level of U.S. aid to the Palestinians — any increases should be used as a mechanism to bring the Palestinians back to the negotiating table.

In a policy paper provided to JI, Rodriguez stated, “I support increased aid that makes its way directly to the Palestinian people through legitimate NGOs.” In that paper, he also called for Gaza to be “brought under the control of the Palestinian Authority,” barring fundamental changes to Hamas.

In his paper, Rodriguez laid out several preconditions for peace, including that the Palestinains recognize Israel’s right to exist and stop inciting terrorism — which includes ending the Palestinain Authority’s “pay for slay” program that compensates the families of individuals who have carried out attacks against Israelis.

Pressed during his interview with JI about specific conditions he wanted the Palestinians to meet, Rodriguez said, “I want… more serious and very specific plans on how to create a Palestinian state… that’s realistic.”

“I’m really concerned with the disingenuous efforts of [BDS] to conflate legitimate issues of free speech with anti-Israel propaganda,” he said. “Boycotting and divestment from Israel is not good diplomatically or culturally or economically. It’s just disingenuous.”

Rodriguez said he sees “kind of a fine line” between anti-Israel sentiment and outright antisemitism. “It’s hard to be anti-State of Israel and not say you’re antisemitic, to be honest with you,” he explained.

In his position paper, Rodriguez called the 2015 nuclear agreement with Iran “well-meaning but insufficient” and said that any future deal should “go beyond the prior efforts that slowed, but failed to fully stop, Iran’s nuclear program” — a more far-reaching goal than is under discussion in negotiations to reenter the Joint Comprehensive Plan of Action. Rodriguez wrote that he supports “enhanced sanctions” as part of this effort.

When pressed, Rodriguez appeared to revise his initial comments, saying, “We should have discussions but I think that the deal as it is right now, I think, probably is not great.”

Speaking to JI just over a week after the hostage standoff at a synagogue in Colleyville, Texas — Rodriguez said that the U.S. should look into strengthening hate crimes laws as well as cracking down on social media companies. He also said he would support additional funding for the Nonprofit Security Grant Program.

“We have to somehow rein [social media companies] in a bit, have more restrictions on what can and should be put on social media platforms,” he said. “Hate speech should not be allowed on social media.”

He proposed significant fines for social media companies if they do not promptly remove hate speech and incitements to violence, as well as increased regulatory authority for the Federal Communications Commission.

“The government has to have some kind of hammer because people are getting hurt,” he said. “Our democracy has been undermined and if that’s not a role for government to step in, I don’t know what is… If we don’t have some kind of mechanism to fine them or make them change their policies, then we’re all going to be in a bad place.”

Rodriguez also reflected on a recent incident in which antisemitic leaflets were left on cars in Austin, which experienced a spate of antisemitic incidents late last year. He said he participated in a rally at the state Capitol in response to one incident, but added that such one-off actions are insufficient to combat the broader problem of antisemitism.

“We can’t say ‘never again’ only when something happens,” he explained. “All of us have a responsibility to talk to other people about this antisemitism and try to get people to volunteer with some of these organizations so that they can get the word out and really educate people that this antisemitism is on the rise, and it’s wrong, and we have to do our part.”