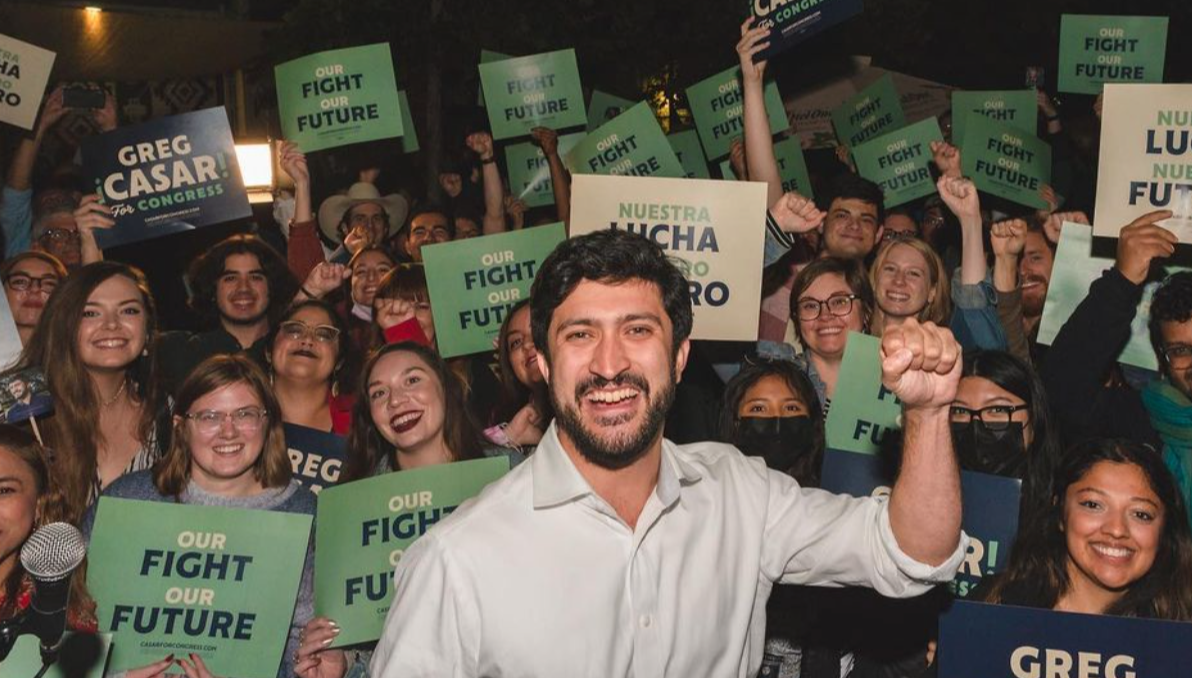 Texas’s newly redrawn 35th Congressional District, which includes parts of Austin and San Antonio, has made a safe Democratic district even safer, local political observers say. But the question that is emerging for the early frontrunner, Austin City Councilmember Greg Casar, a Democratic Socialist and a prominent member of the council, is just how far left to tack in the primary for the seat being vacated by longtime Rep. Lloyd Doggett (D-TX).

An internal poll from Casar’s campaign released earlier this month showed the councilman leading his closest competition, Democratic state Rep. Eddie Rodriguez, by 25 points — 42% to 17% — although such polling, especially in primaries, can be unreliable. Former San Antonio City Councilwoman Rebecca Viagrán formally entered the race after the poll results were released.

The newly redrawn 35th District map is largely similar in shape to the previous district. It includes parts of Austin and a narrow strip down the I-35 highway to a portion of San Antonio to the southwest. Doggett is relocating to the 37th District, which is more concentrated within Austin.

“You have a district that went from being really heavily Democrat in terms of registration numbers and voting behavior to even more Democrat,” Jesse Crosson, a political scientist at Trinity University in San Antonio, told Jewish Insider. “In a state like Texas, that’s pretty remarkable… It’s an odd district that has been made in some ways even odder to make it less competitive.”

Analysts said the district could end up being favorable to a left-wing candidate like Casar, who has made a name for himself in Austin as an advocate for a range of progressive causes, including cutting police funding.

“This is the kind of district where, not unlike [Rep.] Alexandria Ocasio-Cortez [D-NY] and some of the other more progressive candidates, you have a very safe Democratic district that’s going to be decided in the primaries, and so sometimes running far to the left could be an advantage,” Walter Wilson, a political science professor at the University of Texas at San Antonio, told JI.

“He has a core constituency that likes the fact that he’s not someone who compromises very much,” Shaw told JI. “What you’re really looking at in this primary is Casar has a base in Austin, can the other people in this race get known? Is there enough oxygen politically given a gubernatorial election, given the national conversation?”

That said, Casar’s involvement with the “defund the police” movement could also end up as a disadvantage to him among minority voters, who have not been consistently supportive of such tactics.

“[Defunding] the police is an interesting thing for this district,” Crosson said. “It does not break as cleanly on left-right lines as in other places, in part because the Latinx community, a lot of them are police officers or they know police officers… I have a feeling Casar is going to have to be careful about how he speaks about those issues because there’s going to be a sizable blue-collar contingent in this district [where] that’s not going to play as well as people might think.”

Rodriguez — also a progressive but not a Democratic Socialist — will likely try to make the race a two-way contest between himself and Casar, and then pull additional support from the southern portion of the district, Shaw said. Observers added that they expect Viagrán to bank on locking down support from San Antonio, leaving Casar and Rodriguez to compete for the Austin vote.

“Probably the thinking there [for Viagrán] is that by sort of forcing a three-way race, Viagrán has a good chance of advancing to a runoff against one of those two,” Wilson said. Texas requires a winning candidate to secure a majority of votes.

Crosson predicted, however, that Viagrán’s late start — she does not have a public campaign website as of publication — might make it difficult for her to become competitive.

Casar’s most recent city council campaign was endorsed by the Democratic Socialists of America — which recently considered rescinding its endorsement of Rep. Jamaal Bowman (D-NY), viewing him as insufficiently critical of Israel. The Justice Democrats — a progressive group that cut off a candidate it endorsed in 2020 over her support of Israel and has frequently clashed with pro-Israel groups — endorsed his congressional run. Bowman has also endorsed Casar. Casar has not publicly shared his views on the Middle East.

The Working Families Party, in concert with Bowman and incoming New York City Comptroller Brad Lander, recently hosted a fundraiser for Casar. Earlier this year, Lander opposed moves by the New York State comptroller’s office to restrict investments in Ben and Jerry’s parent company Unilever over the ice cream brand’s pullout from what it referred to as “Occupied Palestinian Territory.” New York City Council Member Tiffany Caban and New York congressional candidate Rana Abdelhamid, both of whom are DSA members, were also listed as event hosts.

Casar welcomed Rep. Ilhan Omar (D-MN) to Austin in 2019 for an event organized with left-wing groups Jewish Voice for Peace and IfNotNow “pushing back against… Islamophobia, racism, & anti Semitism,” according to a tweet from the councilman.

He has also spoken out against antisemitism in his community, tweeting on Nov. 1 following a suspected arson at an Austin synagogue, “The rise in anti-semitic attacks and incidents in our communities is unacceptable. This kind of hate has no place here. We’re working with investigators and Jewish community leaders to make sure those responsible are held to account.”

Casar also cosponsored a resolution condemning the alleged attack and calling on the city to improve its response to hate incidents.