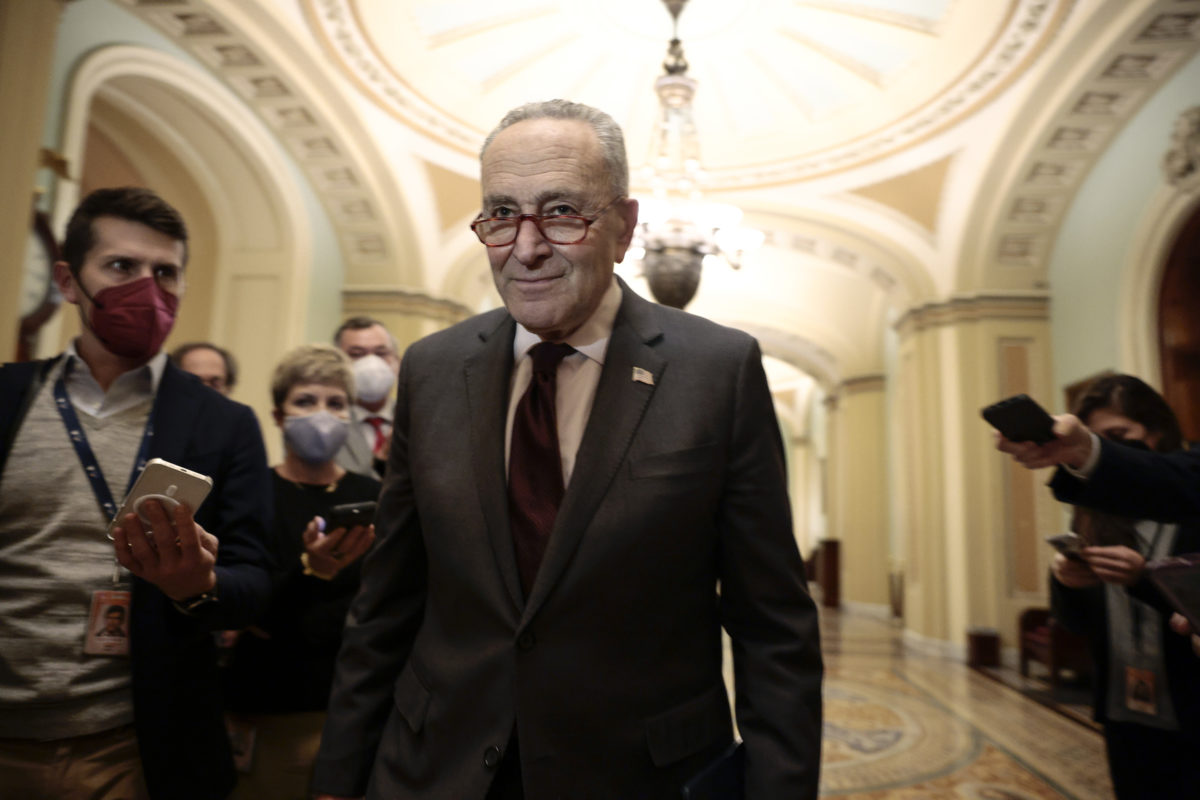 Senate Majority Leader Chuck Schumer (D-NY) walks away from reporters after speaking with them outside the Senate Chambers of the Capitol on December 07, 2021, in Washington, D.C.

The Senate’s Health, Education, Labor and Pensions (HELP) Committee released an updated draft of the Build Back Better Act over the weekend that includes several changes to child care and pre-K provisions pushed by religious groups.

The Orthodox Union and Agudath Israel of America had, in coalition with other religious organizations, lobbied for changes to provisions they said would bar religious providers from receiving funding under these programs unless they drastically changed and secularized their programs.

In the latest draft of the bill, the Senate removed provisions subjecting child care and pre-K funding to a series of additional antidiscrimination requirements under the 2007 Head Start Act. Those provisions, activists said, could exclude single-sex programs and bar providers from giving preference to families of their own faith. The Senate also removed a provision designating child care aid as federal financial assistance to child care providers, which activists said could make religious groups ineligible.

“We are very pleased that the BBB bill that emerged goes far in addressing some of the major issues Agudath Israel and others had raised regarding its child care and [universal pre-kindergarten] provisions,” Abba Cohen, Agudath Israel’s vice president for government affairs, told Jewish Insider.

“The various senators to whom we spoke, Democratic and Republican, were also troubled by the prospect of limiting such participation, and likewise weighed in. Finally, faith groups mobilized their communities to persuasively demonstrate the negative real-world consequences of the unamended bill,” Cohen said.

Rabbi Jonah Dov Pesner, the director of the Religious Action Center of Reform Judaism, had expressed support for the bill as originally written in the House, including the nondiscrimination provisions, in a letter to members of Congress in November.

He argued the nondiscrimination provisions were necessary because “taxpayer funds should never be used to discriminate within government-supported programs… on the basis of race, color national origin (including language), disability, religion or sex.”

“No one should be denied access to federally funded child care and education programs because of their religion or identity,” Pesner continued.

Proponents of these provisions also argued that the provisions did not substantially change the nondiscrimination requirements to which religious providers were subject.

The groups’ third major request — reworking the universal pre-K program from direct aid to providers into a certificate program providing funding to parents — was not included in the new Senate draft.

“Unfortunately, as the bill is currently written, [universal pre-K] funding will only be provided in the form of direct aid, allowing faith-based participation but only to programs that have been secularized — not a realistic option for religious providers or the parents they serve,” Cohen said.

Pesner argued in his letter that the “mixed delivery system” model in the BBB bill, which enables both public and private institutions to be part of the pre-k program, “gives parents the opportunity and access to choose childcare providers that meet their unique needs, whether public or private,” and fills gaps left by public schools unable to expand their pre-K programming.

None of these provisions are finalized; while Senate leadership aims to pass the bill before Christmas, it’s unclear if Manchin will agree to such a timeline or with all of the provisions as currently written, and legislators are expected to negotiate over these and other provisions as the bill is finalized.

Diament said that there may be ways for religious pre-K providers to still receive some funding depending on how states implement the program. He offered the example of New York City’s pre-K program, which pays for half-days of non-religious instruction at religious pre-K schools, leaving a half day of privately financed religious education.

“Because the Build Back Better legislation gives a lot of flexibility to the state in terms of how they implement it, that’s an example of how localities have implemented in a way that allows that kind of approach,” he explained.

“That could mean that religious activity could take place in the government-funding pre-K programs,” Diament said. “It depends on how they write their ruling.”