The revelation came during a Senate Foreign Relations Committee hearing on U.S. military aid in the Middle East 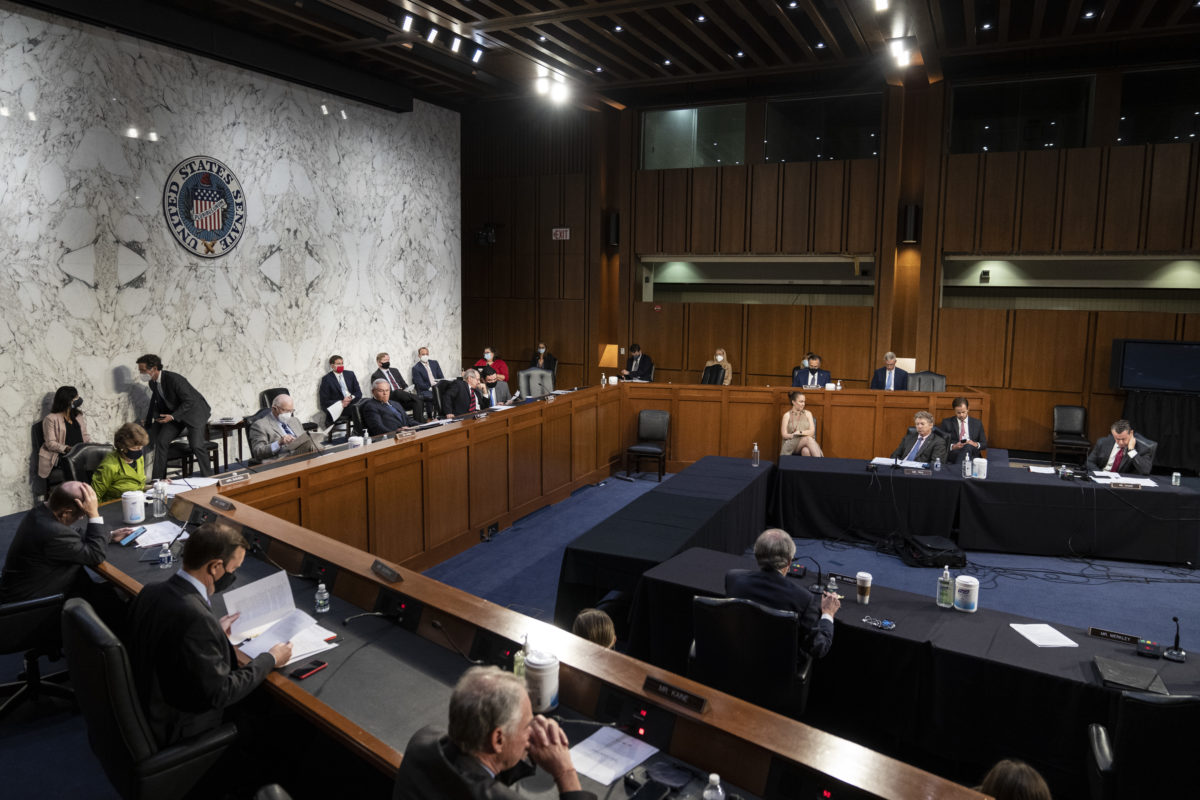 With the Biden administration voicing “unequivocal support” for Israel’s request for additional funding for its Iron Dome missile-defense system, the responsibility to fulfill the request now lies with Congress, Deputy Assistant Secretary of Defense for the Middle East Dana Stroul told a Senate subcommittee on Tuesday.

During the hearing of the Senate Foreign Relations Subcommittee on Near East, South Asia, Central Asia and Counterrorism, intended to examine U.S. security assistance throughout the Middle East, senators questioned the U.S.’s current military aid posture throughout the region, although Israel aid went uncontested.

Stroul told committee members that Israel’s request for resupply for the Iron Dome is now in Congress’ hands, as it must approve the additional appropriations.

“We have unequivocally stated our support for supplemental appropriations and support of replenishing and expanding the system. We have consulted extensively with Congress and provided information paperwork to you all to support how you choose to proceed in funding the request,” Stroul said.

Israel reportedly requested an additional $1 billion for the missile-defense system — which was used extensively, and effectively, during the recent conflict with Gaza — on top of the $500 million provided annually as part of the U.S.’s memorandum of understanding with Israel. There has been no public movement on the request since Secretary of Defense Lloyd Austin met with Israeli Defense Minister Benny Gantz two months ago.

Sen. Lindsey Graham (R-SC), who announced the $1 billion request in June, told JI on July 29 that he had not heard any updates on the status of the request, but hoped it would advance “sooner rather than later.”

During the remainder of the hearing, senators peppered the witnesses with questions about a range of regional challenges, including Iran, Saudi Arabia, the United Arab Emirates and Egypt.

Subcommittee Chair Chris Murphy (D-CT) questioned whether, instead of providing increasing aid to Saudi Arabia and the UAE, the U.S. should instead be seeking to deescalate the Middle East arms race, referring to discussions he’s had with Iranian officials.

“I think there’s some truth to one of the things they consistently say, which is that our missiles are primarily pointed at the Saudis. And every time you sell them more — every time you give them and the Emiratis more equipment and more lethality and more capability, we invest more in our own,’” Murphy said.

“Security cooperation plays a really important role in our Middle East partnerships, but it is not the only answer,” Resnick said. “I would stress that our arms transfers, our security cooperation are not going to be the answer, the magic bullet to Saudi insecurity, they’re not going to be the answer to instability in the region. That will come through diplomacy and through a political solution to the region’s unfortunately many military conflicts… We rely on our partners to understand when there is no military solution to a conflict, and we will continue to stress that to them.”

Sen. Todd Young (R-IN) argued that U.S. deterrence against Iran has failed, citing the country’s spate of aggressive regional activities, and suggested that reestablishing deterrence might involve increasing aid. “Foreign arms sales can be one tool that assists in that overall endeavor,” he said.

Stroul responded that the U.S. has “conventional overmatch” against Iran and seeks to insure that partners “have the capabilities and resources to defend themselves while we invested in diplomacy and political processes to wind down conflicts.” She added that “there is no military solution to the conflicts of the region nor to Iranian aggression.”

She went on to blame the Trump administration’s “maximum pressure” campaign for the increased rate of Iranian-backed attacks against U.S. forces and allies in the Middle East.

Murphy also probed U.S. aid to Egypt, which has seen ongoing government oppression and human rights violations, some of which the Egyptian military has participated in.

“Isn’t there a risk at some point that if there’s no consequence for a country like Egypt to continuing this crackdown on political dissent and speech, that it compromises our ability to lead the world when it comes to the advancement of democracy and human rights?” Murphy asked.

He also questioned whether U.S. aid is still “necessary in order to prompt Egypt to achieve a detente with Israel” or if that relationship, and the U.S.-Egypt relationship, would persist unchanged if the U.S. withdrew a portion of its aid.

Stroul responded that the U.S. has raised human rights concerns with Egypt but “values the relationship with Egypt” as “an important security partner,” and we “believe and support that Egypt has legitimate security concerns and believe that security assistance to Egypt is a critical tool to supporting those needs.

She further emphasized that Egypt is a critical partner in the region due to its control of the Suez Canal, its key role in mediating relations between Israel and Gaza and its position in countering violence in Libya, among other issues.

Young, Murphy and the committee’s witnesses also discussed the U.S.’s broader goal of focusing attention toward great-power competition with China.

The new U.S.-China great-power competition “requires a reevaluation of our global commitments and presence, especially in the Middle East,” Young said. “The historic Abraham Accords provide an opportunity for such reflection. As the United States reduces its own presence, our role in the region must change from the leader to an active supporter. And for this strategy to be successful we will have to rely upon the governments of the partners and allies we have, not the ones we necessarily wish we had.”

Murphy questioned the common refrain in foreign policy circles that, if the U.S. does not continue to provide military assistance at current levels in the Middle East, China and Russia will intervene in its place.

Resnick said that China is not in a position to replace the U.S. as the “partner of choice in the region.”

While it “is looking to undercut our security relationships throughout the world,” according to Resnick, China has shown “no interest in nor a capability” to replace the U.S. as the key guarantor of regional stability in the Middle East.

“Security cooperation will undoubtedly play a role there in our response to strategic competition in the Middle East but also beyond the Middle East, globally,” she said. “It requires us to work with allies and partners, not denigrate them because our combined weight is much harder for China to ignore.”

China and Russia’s security relationships with Iran are further cause for concern for U.S. allies in the region, Stroul added.

“It is yet another reason why our partners need to be reminded that the U.S. is the security partner of choice who will responsibly work with them to respond to their legitimate defensive needs,” she said. “Turning toward China or Russia will not support their security or stability, especially when both of those governments are looking to embolden and enhance Tehran’s conventional military capabilities.”