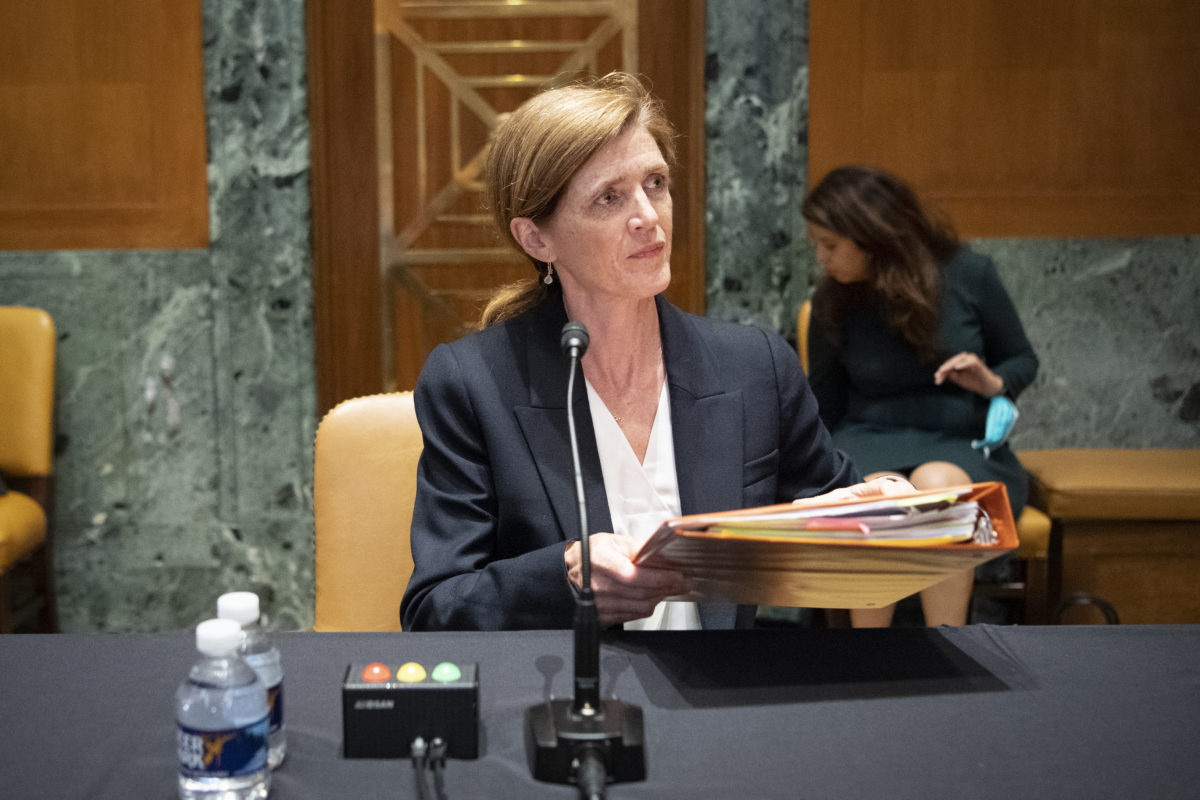 In consecutive hearings on Wednesday, Samantha Power, the administrator of the U.S. Agency for International Development, emphasized the Israeli government’s role in approving future aid to Gaza.

Power said on multiple occasions across the two hearings, held by the Senate Foreign Relations Committee and the House Foreign Affairs Committee, that Israel’s department for Coordination of Government Activities in the Territories (COGAT) must approve any materials that are sent through the border crossing into the Gaza Strip, and that grantees, sub-grantees and sub-sub-grantees must pass “the most elaborate set of vetting procedures that [U.S. has] anywhere in the world.”

Power dodged a question from Sen. Chris Murphy (D-CT) about whether the U.S. is pressuring Israel to ease border restrictions into Gaza and reopen another crossing into the coastal territory.

“You’re right that [U.S. and COGAT procedures] can produce delays, that is something again — in terms of people not getting the resources that they need — that is not in anybody’s interest. But it also should offer some assurance for those who are concerned about assistance not reaching its intended destination that we have systems in place,” Power said in a nod to concerns that materials sent to Gaza could be redirected for terrorist activities.

She also indicated that the Biden administration had been working to convince Senate Foreign Relations Committee Ranking Member Jim Risch (R-ID) to lift his hold on millions in what she described as humanitarian aid to the Palestinians.

Risch spokesperson Suzanne Wrasse denied that any of the aid Risch is holding is humanitarian aid as described by Power.

“Despite suggestions to the contrary, Congress cannot hold humanitarian assistance. It’s not even notified. Any and all funds that were notified to meet urgent needs for food and medical necessities have been released. Senator Risch will continue to hold any funds to the Palestinians that could be used for their ‘pay to slay’ program,” Wrasse said. “As long as there is any question that these funds could fall into the hands of terrorists, he will exercise his right to hold. To suggest that the exercise of our most basic oversight responsibility is somehow denying Palestinians access to food vouchers or other humanitarian aid is irresponsible, not to mention wrong.”

“I just think it would be irresponsible to allow those funds to lapse, and I hope the administration will use all its authorities when it comes to that request that you’ve made,” Van Hollen said.

During the House hearing, Power detailed the status of the implementation of the Middle East Partnership for Peace Act, a program passed into law last year to foster people-to-people partnerships between Israelis and Palestinians.

USAID designated Meghan Doherty, deputy assistant administrator of the Bureau for the Middle East, as the USAID official to oversee the program on a day-to-day basis, Power said, and House Speaker Nancy Pelosi (D-CA) picked former Rep. Robert Wexler (D-FL) as the first MEPPA board member. The chair and ranking member of each of the four committees that oversee USAID, as well as the majority and minority leaders of each chamber, must now also select board members.

Once the board is fully constituted, Power continued, she will be able to name its chair, and she predicted that USAID would soon begin providing drafts of a MEPPA charter and board governance rules. USAID cannot begin distributing MEPPA funding until December.

She further discussed ways in which USAID can contribute to U.S. efforts to strengthen and expand the recent normalization agreements between Israel and several Arab states. Power suggested USAID could pursue trilateral international development projects in third countries through the memorandums of understanding USAID has with Israel, Qatar, Tunisia, Jordan, Kuwait and the United Arab Emirates.

She also highlighted the Middle East Regional Cooperation Program, which brings together professionals from throughout the Middle East to work on development projects such as drought resistant crop research.

Also during the House hearing, Rep. Brian Mast (R-FL) questioned Power on why the Biden administration backs a two-state solution to the Israeli-Palestinian conflict, arguing that the U.S. should not support such a plan. His claim puts him at odds with many in his own party, even as an increasing number of Republicans have argued that the U.S. should not endorse a specific resolution to the Israeli-Palestinian conflict.

“If you’re looking to support a second state, what you’re making is a second Iran. A second terror-led state. That’s a fact. It’s a fact that [the Palestinian Authority is] not holding elections because Hamas would win those elections,” Mast said. “I would argue that your support for a two-state solution is wholly misguided. Do you believe that we would see anything other than a second terror-led state akin to Iran?”