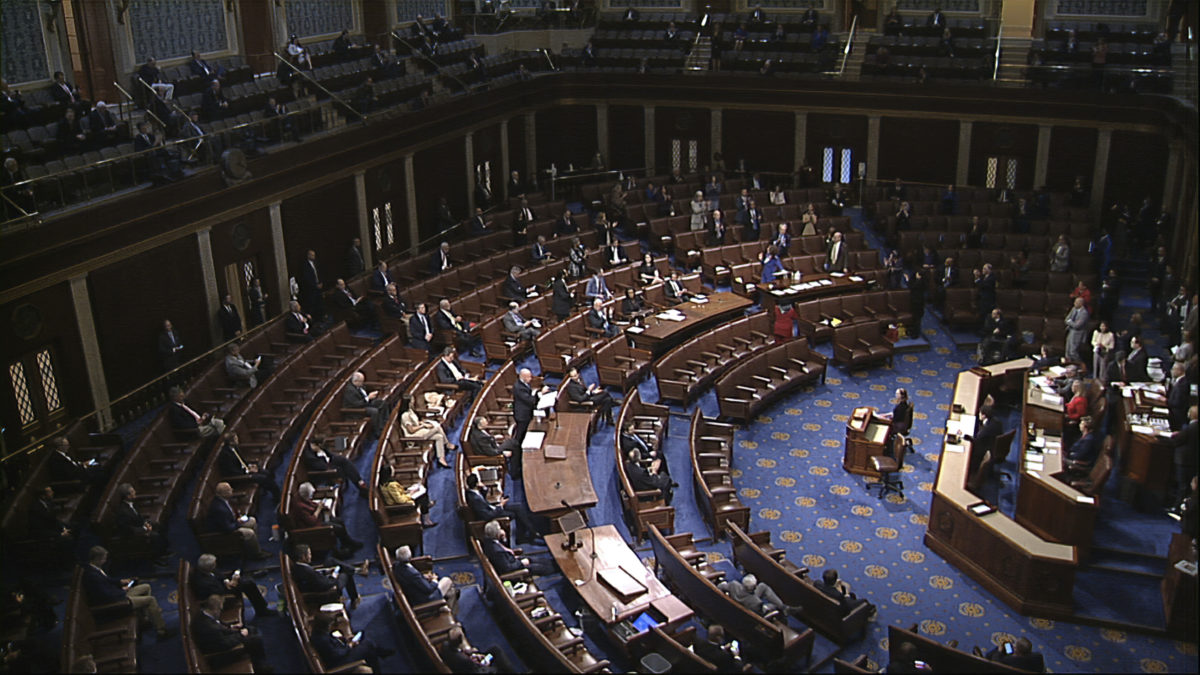 Congress passed a $1.4 trillion omnibus spending bill for 2021 — alongside a $900 billion coronavirus stimulus package — on Monday night. The legislation provides renewed funding for federal agencies for the upcoming year as well as another round of direct stimulus payments to Americans, increased unemployment insurance and Paycheck Protection Program loans.

The omnibus bill includes an increase in funding for the Nonprofit Security Grant Program (NSGP). The final funding amount is double the $90 million provided for the program in 2020, but just half of the $360 million called for by the House and a bipartisan group of senators. The Senate’s initial appropriations proposal held the NSGP funding at $90 million.

“We feel very good. It’s enormously significant,” Jewish Federations of North America President Eric Fingerhut told Jewish Insider on Monday. “We understand all the financial demands on the Congress and the administration at this time. To be able to significantly grow this program, doubling it, is very very meaningful, is a very important step on their part.”

“Doubling the money after last year… is historic and substantial and is going to be very very helpful to the community,” Diament told JI, noting that in past years demand for the grants has far outpaced their availability.

Fingerhut, however, emphasized that even the increased funding will likely not be enough to ensure that every institution that needs funding will be able to receive it. Even so, the grants should enable thousands of additional institutions to upgrade their security.

“It’s going to make a meaningful difference,” he said.

Members of Congress who advocated for increased NSGP funding applauded the provision’s inclusion in the omnibus bill.

“To bring home double the funding than we did in 2019 is a measure of how deeply committed we are to providing nonprofit institutions with the tools they need to keep communities safe,” Sen. Kirsten Gillibrand said in a statement to JI.

Rep. Grace Meng (D-NY) told JI that: “With government resources tight this year due to the COVID-19 pandemic, I’m pleased to have still been able to obtain these critical federal dollars. We can never take a backseat to safety. It must remain our top priority, especially following recent acts of violence and hate that have occurred across our nation. I urge houses of worship and nonprofits in New York and across the country to apply for these important grants.”

One major change from the initial CARES Act stimulus bill passed in March is that the latest relief bill includes $2.75 billion in specifically designated funding for K-12 private day schools, including parochial schools. Private school funding was administered by the Department of Education from a larger pool under the original CARES Act.

The change comes in part thanks to advocacy by the Orthodox Union and the Conference of Catholic Bishops.

“There was some support in the CARES Act, but… our schools really did not see much of that money,” Diament said. “So we had to make a more intense and focused push in this legislation to make sure that it would be done in a way that the money would actually get to our schools.”

Diament said such funds are sorely needed to bridge the costs to retrofit and sanitize school buildings to make them COVID-safe, as well as provide for remote learning technology.

Other elements of the bill, including the additional PPP loans, will also be crucial for Jewish nonprofits, said Fingerhut and Diament. Well over half a billion dollars in PPP funding from the original CARES Act went to Jewish nonprofits, according to Fingerhut.

“These institutions have been working like crazy to stay alive over the months since the first PPP loan ran out,” Fingerhut said. “This has been a long time coming. We’re very, we’re very appreciative that finally, it is here, that the need is real.”

But Fingerhut also expressed dismay that the new bill limits PPP loans to organizations with less than 300 employees, down from 500 employees in the last bill, which he said will exclude larger nonprofits, particularly in large cities.

“But it is also the case that I would say the largest overwhelming percentage of Jewish communal institutions are in fact, below that 300-employee level,” he added.

Increases in unemployment benefits will also be beneficial for many of JFNA’s agencies, Fingerhut said, as many of them are self-insured for unemployment.

Also included in the massive spending bill is the Partnership Fund for Peace Act. The legislation, which was spearheaded by Rep. Jeff Fortenberry (R-NE), provides $50 million per year for each of the next five years — $250 million total — to fund subsidies for joint economic ventures and “people-to-people” exchanges among Palestinians, Israelis and Americans.

“At its core, this bill is about dignity, opportunity and peace,” Fortenberry told JI in an interview on Friday. “I think this is not only a critical piece of legislation, but one of the more substantive pieces of legislation to come along in years that goes to the heart of creating the preconditions for peace, mutuality, interdependence, well being opportunity for all people.”

According to Fortenberry, who introduced the legislation in partnership with retiring Rep. Nita Lowey (D-NY), the fund will leverage the “best of the private market” to bring people together in productive relationships for mutual economic wellbeing and lay the groundwork for peace.

“It’s inevitable [conflict] will happen in the Middle East. And when it does, it is harder to unwind projects like this, versus government spending, which stops, starts, shifts and is hard to predict in the future,” he explained. “It’s also a force multiplier because the government is not funding something fully. It’s funding the seed capital that invites investment capital along with virtuous business people who want to see these social outcomes as well.”

Partnership for Peace funds are specifically barred from going to foreign governments, terrorist groups, the PA or the Palestinian Liberation Organization. Funding will be administered by the United States Agency for International Development (USAID) and the United States International Development Finance Corporation, with an advisory board appointed by USAID’s administrator, the secretary of state and senior congressional leaders.