In a new book of essays, pro-Israel progressives tell the American left and conservative Zionists: we’re here, and we’re struggling 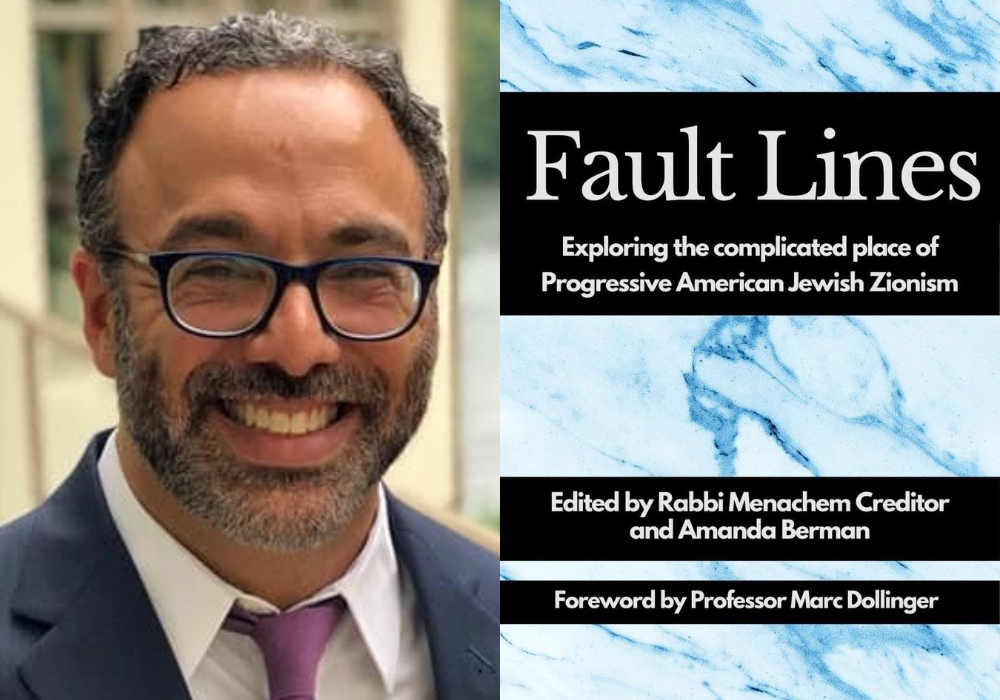 As rockets flew between Israel and Gaza last month, American Jews watched with alarm as anti-Israel rhetoric became the norm in some left-wing circles. Accusations of Israel’s alleged genocide, ethnic cleansing and apartheid spread widely, even reaching the halls of Congress.

“It’s become a very common experience for rabbis, and Jews of really any kind who lean to the left progressively, to find, at the very least, difficulties in progressive circles with the love for Israel,” said Rabbi Menachem Creditor, the Pearl and Ira Meyer Scholar-in-Residence at UJA-Federation of New York. Among people like him — American Jews who support progressive policies but also support Israel — “the language of being lonely has been getting louder.”

With Zioness founder Amanda Berman, Creditor is the editor of Fault Lines: Exploring the Complicated Place of Progressive American Jewish Zionism, a book of essays released this week. The idea behind the book was to allow members of the Jewish community to grapple, collectively, with the increasing difficulty of being a Zionist in progressive spaces. “Why should people continue to feel lonely when it’s a very obvious problem?” Creditor asked.

The book contains four dozen essays, half of which are original; the rest were reprinted from other publications or taken from speeches or sermons given by the book’s contributors over the past couple of years. Writers include rabbis, journalists, nonprofit professionals and activists; organizations represented include the American Jewish Committee, the National Council of Jewish Women and the pro-Israel LGBTQ organization A Wider Bridge, along with major Reform and Conservative congregations around the country.

The essays contend with what it means to be a Jew who supports Israel and who also supports progressive causes in the U.S., and to refute common misconceptions from people on both the political left and right. “The presumption from anti-Zionists in the progressive world is that you cannot be a good person and love Israel, and that’s just wrong,” Creditor told Jewish Insider.

The problem, he argued, is an “anti-Jewish fundamentalism at the fringes of progressive politics,” such as the recent removal of an Israeli food truck from an immigrant food festival in Philadelphia. “If it isn’t countered, it becomes the core of the progressive movement.” The response should be “to show up as loud, proud Jews,” Creditor said.

The idea to put together a volume of essays came after Creditor saw a Times of Israel blog post authored by Jeremy Burton, executive director of the Jewish Community Relations Council of Greater Boston. “The American left has embraced moral maps that, while they may provide helpful frameworks for understanding some of America’s foundational and ongoing issues, warp understanding and discourse when applied to other parts of the world,” Burton wrote, in a post published the day before Israel and Hamas agreed to a cease-fire.

“I found it to be one of the most important statements today, about how an American-left lens can get Israel wrong,” said Creditor. “It sparked my thinking that we could put together a collection relatively quickly because this is not a new question.”

Creditor has a history of progressive activism, including as founder of the Rabbis Against Gun Violence movement. But he sees himself first and foremost as a Jewish educator — so while he hopes the book might inspire progressive politicians to engage in dialogue on these topics, his desired audience is the Jewish community.

“I want to support those who are showing up with courage as Zionists in progressive spaces, for them to feel the camaraderie and community of those who are experiencing similar struggles,” said Creditor. He also wants to remind right-leaning pro-Israel advocates that progressives — including those who might criticize, but deeply love, the Jewish state — are, in fact, Zionists.

“As a Jewish community, we have to stop alienating each other when we disagree. We should not deem as anti-Zionist someone who is a progressive American voter who loves Israel. Within Israel, there’s robust debate about what building a better society looks like. That’s a healthy democracy,” Creditor explained. “The presumption that a critical voice is treasonous is itself incorrect.”

Neither Creditor nor Berman define what the book means by “progressive,” but Creditor argues that this is by design. They did not want to limit participation in the project.

“I’m not quite sure what ‘progressive’ means, and there was no litmus test for the authors, because I’m not really sure how to define the word to begin with,” noted Creditor. “I just know how it generally lumps together people who favor LGBTQ equality, combat the American gun violence epidemic [and] who stand for criminal justice reform.”

Still, even though the editors did not set ideological boundaries about who could contribute, the book mostly falls within mainstream pro-Israel discourse. Numerous contributors wrote about trips to Israel with AIPAC, and one essay made the argument that progressives should attend AIPAC’s annual policy conference.

“There were no submissions rejected based on any institutional affiliation,” said Creditor. After putting out the call for submissions, Creditor and Berman did not receive any from people who affiliated with more left-wing Israel-focused organizations like J Street or IfNotNow.

The one requirement was that contributors consider themselves Zionist. “This is about how to navigate the world of progressive Zionism, not how to reject Zionism,” he noted.