'If the Jewish community takes her on, it only makes her bigger in the eyes of her constituency,’ Abe Foxman tells JI 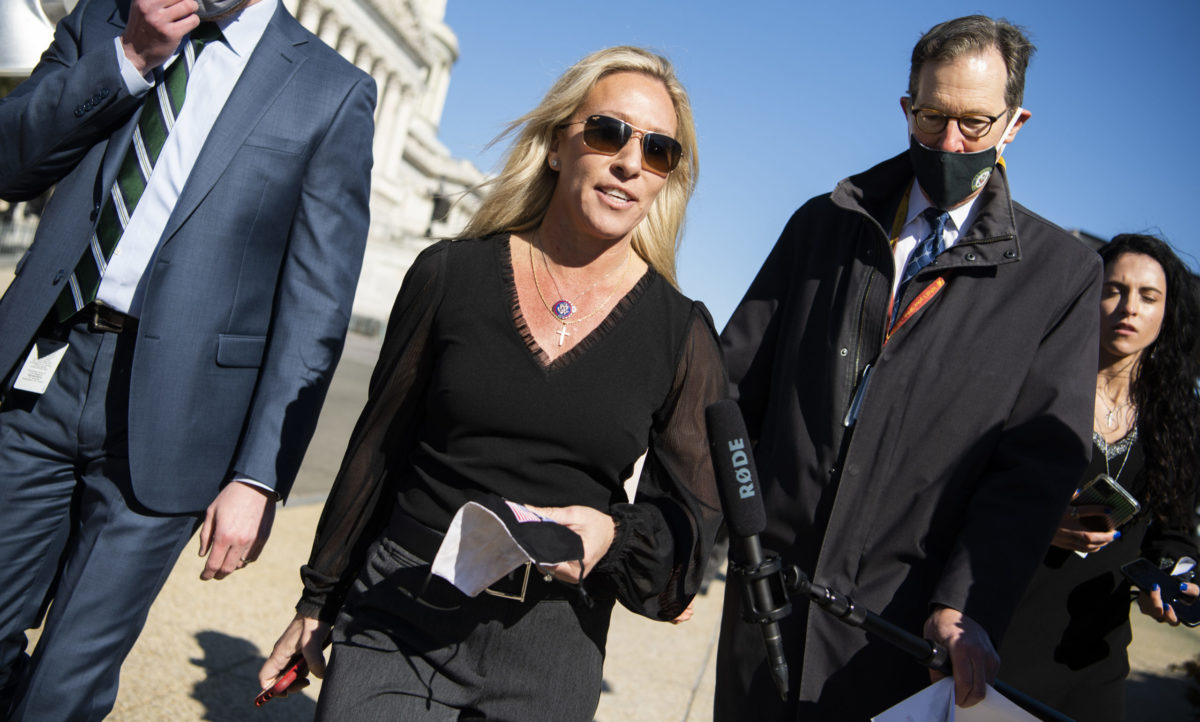 Rep. Marjorie Taylor Greene (R-GA) talks with the media after news conference with members of the House Freedom Caucus outside the Capitol to oppose the Equality Act on Thursday February 25, 2021.

Rep. Marjorie Taylor Greene’s (R-GA) latest comments, in which she compares COVID mask and vaccine mandates to the Holocaust, are highlighting a debate within the Jewish community on when and how to respond to antisemitic comments from legislators on the fringes of their party.

Greene’s tirade began last week during a podcast appearance, in which the Georgia legislator said that House of Representatives rules regarding masking and vaccines were “exactly the type of abuse” that Jews faced during the Holocaust.

On Tuesday, after increased backlash for new tweets on the subject, she doubled down and deflected blame toward Democrats, adding, “I’m sorry some of my words make people uncomfortable.”

“There’s always this balance — not making her a martyr,” former Anti-Defamation League National Director Abe Foxman told Jewish Insider. “If the Jewish community takes her on, it only makes her bigger in the eyes of her constituency… It’s always this balance and [you] hope that she’ll shut up and go away.”

In the latest blow-up, Republicans’ waited days before condemning Greene. That delay, as well as the intense media attention her remarks received, have made it more necessary for Jewish leaders to condemn her rhetoric, Foxman added.

“You’re almost forced to take her on,” he explained.

Holocaust historian Deborah Lipstadt told JI that she agrees that it’s sometimes better to ignore individuals like Greene “to a point,” but added that the Georgia lawmaker and QAnon conspiracy theorist has surpassed that benchmark.

Greene is among the most prominent members of the House Republican freshman class, and raised $3.2 million in the first quarter of 2021 — an astounding sum outpacing many longtime elected Republicans.

House Republican leaders condemned Greene’s rhetoric on Tuesday amid increasing pressure to respond, but some sought to deflect attention toward what they characterized as antisemitism from Democrats.

“Marjorie is wrong and her intentional decision to compare the horrors of the Holocaust with wearing masks is appalling,” House Minority Leader Kevin McCarthy (R-CA) said, before adding, “at a time when the Jewish people face increased violence and threats, antisemitism is on the rise in the Democrat Party and is completely ignored by Speaker Nancy Pelosi.”

Later in the day, McCarthy introduced a bill to combat antisemitic hate crimes. In his announcement, he lambasted some House Democrats, accusing them of antisemitism, but did not mention Greene.

McCarthy’s condemnation evidently angered Greene, who responded “thank you for seeing the truth” to a comment on Twitter calling McCarthy a “moron” and a “feckless c**t.”

A spokesperson for Republican Whip Steve Scalise (R-LA) struck a similar tone to McCarthy. “He does not agree with these comments and condemns these comparisons to the Holocaust,” the spokesperson said. “We also need to be speaking out strongly against the dangerous antisemitism that is growing in our streets and in the Democrat Party, resulting in an alarming number of horrific violent attacks against Jews.”

“Equating mask wearing and vaccines to the Holocaust belittles the most significant human atrocities ever committed,” Stefanik said in a tweet. “We must all work together to educate our fellow Americans on the unthinkable horrors of the Holocaust.”

The only House Republican who came out publicly to defend Greene on Tuesday was Rep. Matt Gaetz (R-FL) — who has tied himself closely to Greene.

“Democrats attack Israel. [Greene] defends Israel and attacks Democrats. Media falsely slams [Greene] as antisemitic. Some Republicans take the bait, sadly,” he said in response to a photo of a pro-Israel poster at a Greene event last week.

Republican leadership has repeatedly declined to take action against Greene amid past controversies. Democrats responded in February by forcing a vote removing her from her committee positions, with 11 Republicans voting in favor. The GOP response to Greene diverges starkly with their moves to unilaterally sideline former Rep. Steve King (R-IA) and remove him from his committee posts in 2019 after he defended white supremacy.

Greene’s latest comments appear to be adding additional fuel to Democratic attempts to punish her, including a new censure resolution from Rep. Brad Schneider (D-IL). Democratic leaders have also reportedly discussed seeking a restraining order against Greene on behalf of Rep. Alexandria Ocasio-Cortez (D-NY), who has been harassed by Greene both during and prior to Greene’s tenure in Congress.

In a statement Tuesday evening, House Majority Leader Steny Hoyer (D-MD) appeared to raise the specter of expelling Greene from the House, saying “Rep. Greene should change her rhetoric and behavior if she intends to remain a Member of the House.” Rep. Jimmy Gomez (D-CA) introduced a resolution to expel Greene in March, which has 72 cosponsors. The long-shot effort would require two-thirds of the body to expel Greene.

Rep. Josh Gottheimer (D-NJ) is sending a letter to President Joe Biden — co-signed by Reps. Elaine Luria (D-VA), Kathy Manning (D-NC) and Dean Phillips (D-MI) — which condemns as antisemitic comments from both Greene and congressional Democrats who have accused Israel of apartheid and terrorism.

The letter calls Greene’s comments “unacceptable, and blatantly antisemitic” and says the Democrats’ statements are “antisemitic at their core and contribute to a climate that is hostile to many Jews.” The signatories also call on Biden to swiftly nominate an ambassador to monitor and combat antisemitism.