‘Your nomination is sort of a proxy... about the wisdom of the JCPOA,’ Sen. Tim Kaine (D-VA) said during the hearing 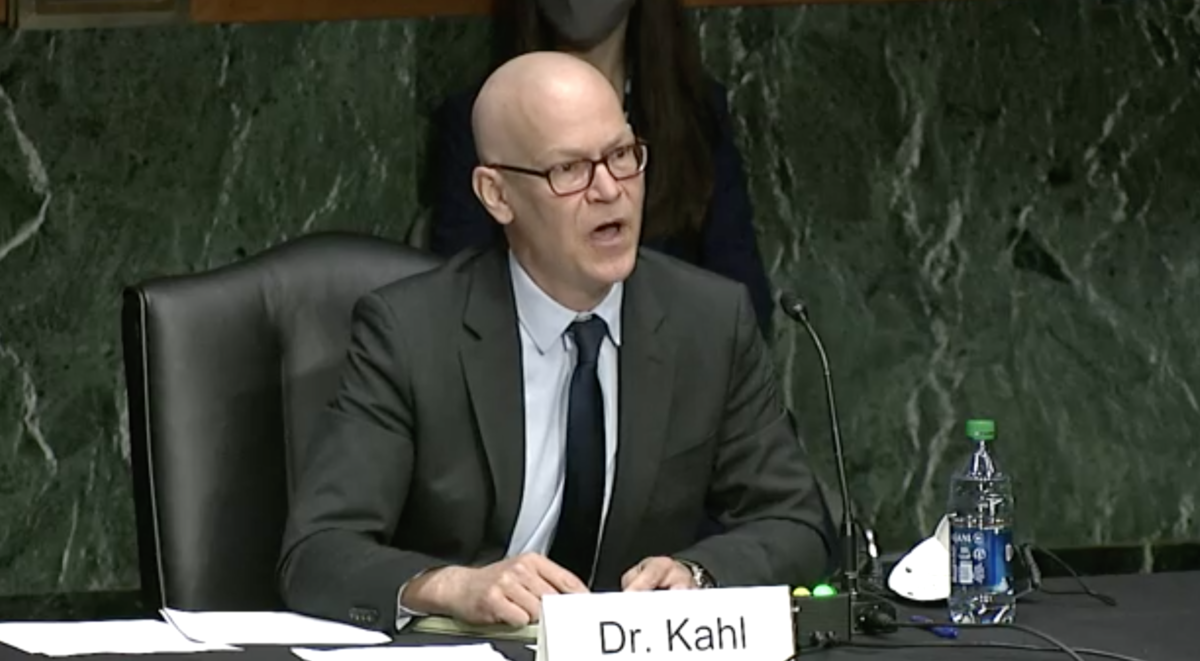 Colin Kahl, President Joe Biden’s nominee for under secretary of defense for policy, faced intense scrutiny from Senate Republicans at his confirmation hearing on Thursday, focusing in particular on his past comments about the 2015 Iran nuclear deal, former President Donald Trump’s actions against the Iranian regime and issues related to the U.S.-Israel relationship.

Sen. Tim Kaine (D-VA) sought to sum up the tenor of much of the hearing. “I think your nomination is sort of a proxy for a sharp difference of opinion in this committee and in Congress about the wisdom of the JCPOA, and that is the core of many of the questions today,” he told Kahl, who, if confirmed, would be the top policy official at the Pentagon.

Republican senators, meanwhile, repeatedly pressed Kahl on partisan tweets that stridently criticized the Trump administration and others in the GOP, such as one in which Kahl called the GOP “the party of ethnic cleansing.”.

“Your long record of volatile outbursts will have a toxic and detrimental impact on your relationship with Congress. What’s worse, I fear your intemperate manner will create an equally toxic environment inside the Pentagon,” Sen. Tom Cotton (R-AR) told Kahl. “If this is the way you respond to mere policy disagreements when you’re sitting at home reading the news, I do not think that you’re fit to sit in the Pentagon and make decisions about life and death.”

Kahl apologized during the hearing for being “swept up” in “polarizing” social media rhetoric, although that apology did not seem to satisfy the panel’s GOP members.

“There were a number of positions that President Trump took that I strongly opposed. I think the language that I used in opposing those was sometimes disrespectful, and for that I apologize,” Kahl said.

Kahl’s Twitter habits could severely imperil his nomination — the White House was forced this week to pull Neera Tanden’s nomination to lead the Office of Management and Budget after Republican senators, as well as Sen. Joe Manchin (D-WV), came out against her, in response to her prolific history of tweets criticizing them.

During the hearing, Kahl defended his past criticisms of the Trump administration’s “maximum pressure” sanctions regime, which he said had encouraged Iran to accelerate the pace of its nuclear enrichment and its malign behavior throughout the Middle East.

“Iran is a lot closer to the fissile material required for a nuclear weapon than they were at the end of the Obama administration,” Kahl said. “And we’ve seen more attacks against our forces in Iraq, we’ve seen attacks in the Strait of Hormuz, we’ve seen more drone and missile attacks on Saudi Arabia.”

Sen. Joni Ernst (R-IA) pressed Kahl on his 2015 assessment that the $100 billion in frozen assets that were released to Iran would be used for domestic investment — ”most of it will go to butter,” Kahl said at the time.

Kahl defended this position, citing 2017 testimony from the Defense Intelligence Agency that most sanctions relief to Iran did go towards domestic spending, adding that he was not privy to more recent information.

The former national security advisor to then-Vice President Biden subsequently acknowledged “it’s completely conceivable” that some of the money may have gone toward Iranian proxy forces which have since attacked Americans, which he had also stated in 2015.

In early 2020, Kahl spoke out against the killing of Iranian general Qassem Soleimani by U.S. forces, warning that the move could drag the U.S. into a war and lead to U.S. forces’ expulsion from Iraq, but tempered that criticism at Thursday’s hearing.

“I think [the world] is probably a better place without [Soleimani],” Kahl said in response to a question from Sen. Jim Inhofe (R-OK).

Inhofe told JI after the hearing that he agreed with “some of the things” that Kahl said about Iran, but “he wasn’t strong enough.”

Kahl also affirmed his support for the Biden administration’s policy of keeping the U.S. embassy in Israel in Jerusalem, despite previously warning that such a move would worsen relations with both Arab nations and the Palestinians.

“I think dynamics in the Middle East have changed,” Kahl said. “I support the Abraham Accords and I wouldn’t move the embassy away from Jerusalem. And that’s President Biden’s policy, which I support.”

He explained that he sees the Abraham Accords, signed last September, as the result of decade-long trends.

“It is the culmination of a set of trends that have been in the region for about a decade,” including the threats from Iran and extremist Islamism and an increasing desire for self-reliance in the region, Kahl said. “I commend the Trump administration for leaning into those strategic trends and the Abraham Accords are something I think we should continue to encourage.”

Sen. Josh Hawley (R-MO) — who has voted against all but one of Biden’s nominees so far, and sought to slow some confirmation proceedings — told JI he was not satisfied with Kahl’s answer to a question the senator posed about Kahl’s perspective on the U.S.-Israel relationship.

“This is somebody who clearly has a background as being a very partisan political actor,” Hawley added. “His rage tweeting — I just think it raises questions about, is this somebody who’s really going to be focused on policy?”

Kahl seems unlikely to pick up many, if any Republican votes, with numerous Republican committee members indicating during the hearing that they planned to vote “no.”

“There are obviously concerns, legitimate concerns — not just a proxy, as Senator Kaine said, on JCPOA — and it’s certainly not a partisan one because some pretty high-level Democrats opposed JCPOA,” Sen. Kevin Cramer (R-TK) told JI. “My sense of it is at least at this point it’s going to be pretty close to a straight party-line vote on his confirmation, but we’ll see what happens there.”

Cramer added that he had not made a final decision, but was leaning toward opposing Kahl’s confirmation. Inhofe, the top Republican on the committee, told JI he would vote against Kahl, but said he had not discussed with his colleagues how they planned to vote.

Sen. Joe Manchin (D-WV), a critical Democratic swing vote who helped sink Tanden’s nomination and serves on the Armed Services Committee, said Thursday that he will need to review Kahl’s tweets before making a decision on whether to vote for him.

“To make this place work, we just don’t need that type of mentality or demeanor. We need to do everything we can in a conciliatory manner to get people who want to work together. We don’t need to divide any further,” he told The Washington Post.

Following the hearing, Christians United for Israel came out in opposition to Kahl’s nomination, calling him “a serial Iran appeaser with close ties to Tehran’s allies in the U.S,” adding “it is vital that the Senate set aside partisan differences and loyalties and ensure this misguided nomination does not move forward.”