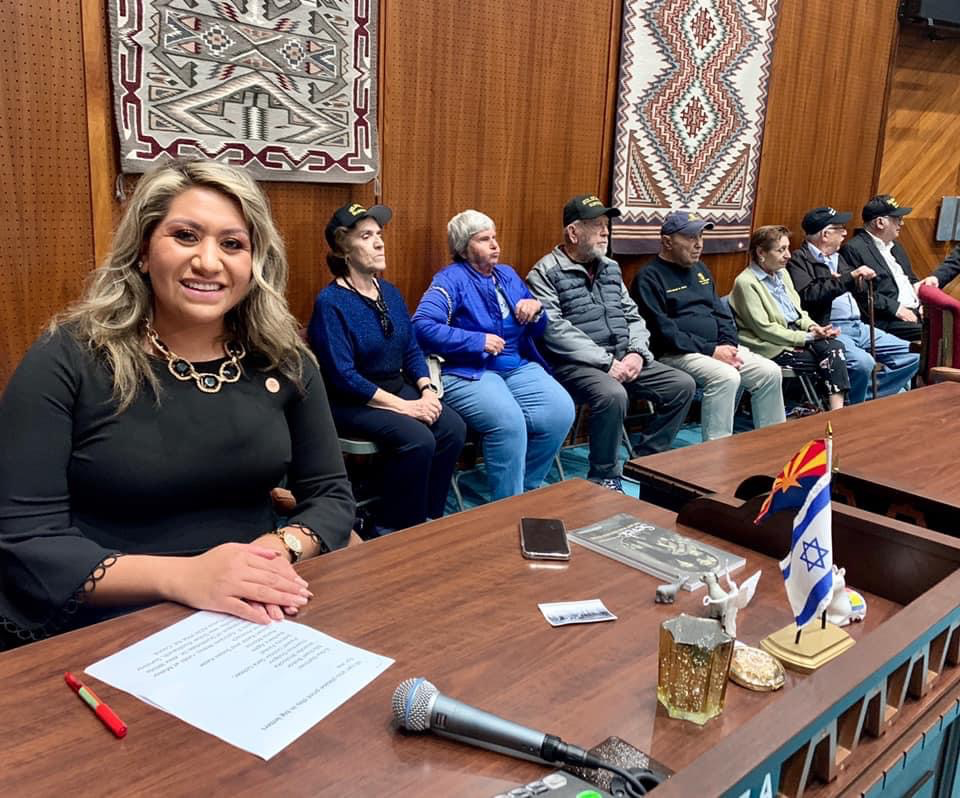 Last week, Alma Hernandez, a Democratic state legislator from Tucson, introduced her long-awaited Holocaust education bill to the Arizona House of Representatives. The bill, which is likely to pass with bipartisan support in both chambers, requires that public schools in Arizona teach students about the Holocaust and other genocides at least twice between grades seven and 12.

“I feel that the earlier we can introduce it to students, the better,” Hernandez, 27, told Jewish Insider in a recent interview, referring to a recent survey that revealed, among other startling details, that nearly two-thirds of young American respondents didn’t know six million Jews were killed in the Holocaust. “I think if people, students at least, are taught this early on, we won’t see as many issues that we see now. At least that’s my hope.”

For Jewish community activists and Holocaust survivors in Arizona, the legislation is long overdue — and arrives at a pivotal moment. “It’s even more important at this time,” said Paul Rockower, executive director of the Jewish Community Relations Council of Greater Phoenix, emphasizing that “there are some people who do not receive enough of an education on these matters.”

“It’s quite clear this is to ensure that we don’t see more people wearing those stupid ‘Camp Auschwitz’ T-shirts,” Rockower added, alluding to the man who was dressed in a shirt emblazoned with antisemitic language during the Capitol breach two weeks ago. (Later identified as Robert Keith Packer, he was arrested on Wednesday — one of many white supremacists who have been apprehended since the January 6 insurrection.)

Michael Beller, a co-founder of Arizona Teaching the Holocaust, also mentioned the recent incident at the Capitol in making the case for the bill.

“Holocaust and genocide education is important to learn about because it teaches how rising populism and rising nationalism can lead to a Holocaust or genocide,” he said. “What is more is that Holocaust and genocide education is about the recognition that people can perpetuate the most horrendous crimes against their fellow citizens and that above all we need to be kind and respect one another.”

If not for the coronavirus pandemic, the bill would likely have been signed into law last year.

Hernandez, a Mexican-American Jew who was elected to the Arizona state legislature in 2018, began crafting the bill shortly after she assumed office in January 2019. The goal, she said, was to devise legislation that would appeal to local Holocaust survivors — with whom she worked closely throughout the bill’s conception — as well as state lawmakers.

Hernandez anticipated that the bill would meet resistance in the state legislature, which is controlled by Republicans, when she set out to pass it in 2020. Arizona, she said, “is a state that usually does not mandate anything for education.” On top of that, only 15 states have mandatory Holocaust education. With such obstacles in mind, “we were very cautious about the language,” said Hernandez, noting her decision to include other genocides — including those in Rwanda, Bosnia and Armenia — in the bill.

Ultimately, the bill was widely accepted by both parties. The legislation cleared the House — at which survivors testified on its behalf — and made its way to the state Senate, where it was expected to be sent up to the governor and signed into law.

But then the pandemic hit, stalling the legislative session, and the bill found itself in limbo. “It essentially died because of COVID,” Hernandez told JI.

Now, Hernandez is back where she started, as the bill must go through both chambers again with the start of a new session. The bill had a hearing last week and a floor vote is yet to be scheduled, though Hernandez estimates it will happen within the next few weeks. She is confident it will pass, particularly given that the Arizona Board of Education already added Holocaust education to its administrative code last October.

Despite the board’s decision, Hernandez believes the bill is necessary to ensure that such education is codified. “It really isn’t always set in stone unless it’s in a bill form,” she said. “So we just want to make sure that it’s officially part of state law in Arizona.”

Tammy Gillies, a regional director for the Anti-Defamation League in Arizona, endorsed that view, noting in a statement to JI that the ADL “strongly supports” Hernandez’s legislation during “a time when memories of the Holocaust are fading, and when inappropriate Holocaust and Nazi analogies are cropping up more frequently in the public square.”

Gillies added, “We look forward to Arizona joining the growing number of states that currently recognize the importance of genocide education in schools.”

Sheryl Bronkesh, the president of the Phoenix Holocaust Association who worked with Hernandez on the bill, remains slightly less self-assured. “Hopefully they’ll be able to get that done this year without any problems,” she said.

“But who predicted a pandemic?” Bronkesh added. “You can never say something’s sure anymore.”

Bronkesh has been working to pass a mandatory Holocaust education bill in Arizona for about the past three years, since she took over at the Phoenix Holocaust Association. In 2019, she recalled, one “really long bill” was put forth by Republican state legislator Michelle Udall. It “got pretty far,” but failed to make it through the state legislature. “The next year was when Alma got involved and that we almost made it,” Bronkesh said. “Almost.”

There are no top-down state curriculum requirements in Arizona, so the Phoenix Holocaust Association has put forth an educational tool kit, publicly available on the website of the Arizona Department of Education, that provides teachers with such resources as reading lists, video lectures and primary sources.

Volker Benkert, an assistant professor of history at Arizona State University who specializes in Holocaust studies, is part of a task force assembled to bolster the tool kit.

In an interview with JI, he said the bill was a promising first step in ensuring that Holocaust education finds its way into Arizona classrooms, and he believes it will pass in the state legislature. “It’s a long time in coming,” he said, while adding the caveat that he views the legislation as a “stepping stone toward” a more meaningful bill.

The bill received no funding, a fact Benkert acknowledges as perhaps necessary at the outset, but one which he hopes will be rectified in the future to ensure that training is available to teachers in the years ahead. “It’s better to have a bill than no bill,” he acknowledged. “But I think this would be much more valuable, or even more valuable, if we had a follow-up with some teeth.”

Hernandez said the lack of funding was strategic. “We didn’t add any appropriations to this because there are just so many resources we can already use that are available to us,” she said. “I figured it would be much more difficult to get people on board, especially during a pandemic, to give money toward a mandate on education.”

The plan is to secure funding “down the road,” Hernandez said.

Arizonans who have followed the bill appreciate Hernandez’s persistence in ensuring its passage through the state legislature.

“I am both professionally and personally very proud of Alma for leading the effort to pass this important legislation for Arizona,” said J. Edward Wright, director of the Arizona Center for Judaic Studies at the University of Arizona. “Moreover, I think her bill should serve as a model for every state that does not currently include Holocaust and genocide education in its required curriculum. It is a deeply disappointing fact that today too many Americans lack even a basic understanding of the Holocaust and of the social environment that engendered it.”

Hernandez faced some resistance last year when she introduced a separate bipartisan bill on antisemitism. It, too, was stalled because of the pandemic. “I won’t be bringing it this year,” she said. “Too much drama.”

The Holocaust education bill, on the other hand, is a more immediate concern for Hernandez, and represents the ultimate fulfillment of a personal ambition.

Hernandez, a native of Tucson, recalled learning about the Holocaust as a young girl from her first-grade elementary school teacher, Theresa Dulgov, a child survivor. “If you went to that school and you were in her classroom, you definitely learned her stories and you never forgot them,” said Hernandez, who wonders how many students have missed out on such experiences because Holocaust education hasn’t been mandatory in Arizona.

Dulgov, now 76, testified on behalf of the bill last year. “I think that we need to let people know what it was, that it’s not a made-up story,” Dulgov said of the Holocaust. “They need to understand that it was real, and the best way for them to learn that is from hearing from survivors.”

As the years go by, Dulgov added, “we’re getting older and older, and we are losing more and more survivors who can tell children what it was like.”

Hernandez feels a similar sense of urgency. The bill, she said, was the first she introduced this legislative session. “I still have other bills, but that was my priority bill, because I had made a promise to survivors, and I told them, ‘Don’t worry, we’ll bring it again.’”

Two survivors with whom Hernandez worked to fine-tune the bill have died in recent months, including one two weeks ago from COVID-19. “They were a big part of it,” Hernandez said. “That’s why it’s something that’s very important to me. I’m hoping that we can get it done quickly without any interruptions this time.”