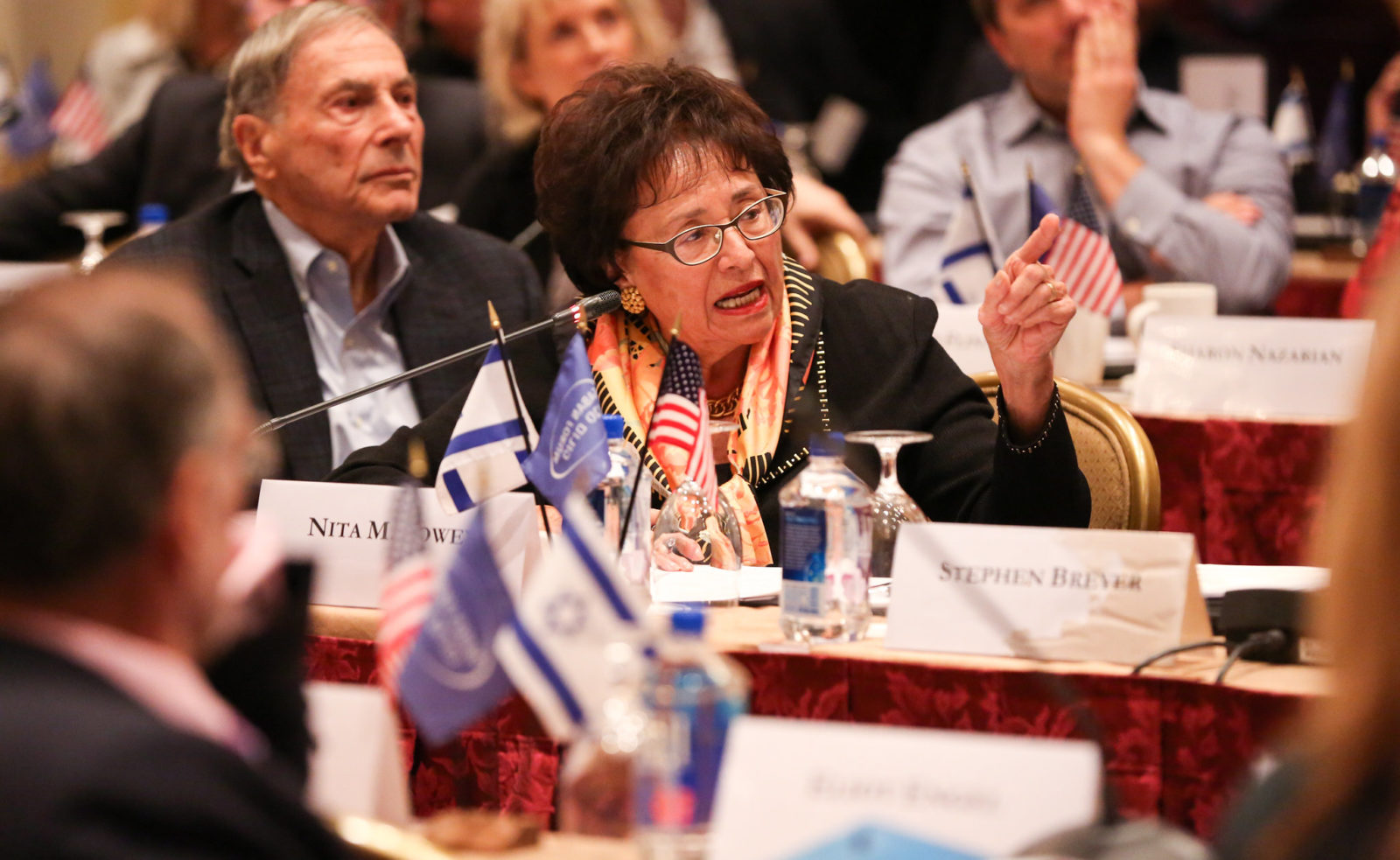 Nita Lowey looks back on more than 30 years in Congress

In November 1988, a 51-year-old upstart Democratic candidate named Nita Lowey overcame the odds to defeat two-term Republican incumbent Rep. Joseph J. DioGuardi in a nail-biter of a congressional election. Lowey’s upset, all those years ago, feels reminiscent of the current political moment, as establishment players face stiff competition from progressives.

Last August, Lowey got a taste of that dynamic when Mondaire Jones, a 33-year-old attorney, announced he would challenge Lowey in the Democratic primary. Two months later, Lowey declared that she would not seek re-election. The congresswoman has said she made her decision independent of Jones, who is now poised to succeed her. But the timing may have been significant: Rep. Eliot Engel (D-NY), who serves in a neighboring district and entered Congress in Lowey’s class, appears to have fallen to a left-leaning challenger in the June 23 primary.

Lowey, for her part, is sanguine about the recent primary election in her own district, the results of which have not yet been officially called. “Whoever wins, I wish them well,” she told Jewish Insider in a phone interview. “I just would hope that they would continue a legacy that, to me, is very important: helping people.”

As she prepares to retire at the end of her term, Lowey, 83, reflected on her decades-long run serving the northern suburbs of New York City.

“It’s been an extraordinary opportunity for me,” said the congresswoman, who represents the 17th congressional district, which includes portions of Westchester and all of Rockland County.

That is, of course, an understatement. Throughout her 32 years in office, Lowey has established herself as a formidable presence in Washington, having ascended to the upper ranks of the House Appropriations Committee, which she now chairs along with its subcommittee on State, Foreign Operations, and Related Programs.

“She was a powerhouse,” said Howard Wolfson, a Democratic strategist who worked for Lowey in the early 1990s as her chief of staff and press secretary and in the early 2000s when she served as the first chairwoman of the Democratic Congressional Campaign Committee. “I learned an enormous amount from her — about how she operated, how she built coalitions, how she was able to work with people from both sides of the aisle, how she used her charisma and her energy and enthusiasm.”

“She wanted to make a difference,” Wolfson added. “She was there to legislate.”

In her conversation with JI, Lowey rattled off a number of achievements, such as her advocacy on behalf of public television, abortion rights, food allergy labeling, gender equity in preclinical research and environmental protections for the Long Island Sound.

Her work advocating for pro-Israel causes, she said, is a part of her legacy she views as particularly important. “The work that I’ve done regarding the Israel-United States relationship almost makes me feel as [though] I’m carrying on l’dor v’dor, the tradition,” said the Bronx-born Lowey, who is Jewish and has long felt a kinship with Israel.

“I think it’s very important to continue that relationship,” said Lowey, adding her concern that partisan politics have, more recently, interfered with bipartisan support for the Jewish state.

Lowey recalled the time in 2015 that Israeli Prime Minister Benjamin Netanyahu — who she refers to using his nickname, Bibi — appeared before Congress to deliver a controversial speech that was highly critical of former President Barack Obama’s support for the Iran nuclear deal.

“I called Bibi on the phone and I said, ‘Your coming here without a bipartisan invitation is a mistake,’” she said. “‘I will make sure that you get another invitation, but please, you’ve got to keep Israel a bipartisan issue.’ He came anyway. He didn’t listen to me.”

The congresswoman is also worried about possible annexation of parts of the West Bank, which Netanyahu has said could happen as soon as this month. “I have many concerns about the annexation,” she said. “This expansion would put an end to a two-state solution, in my judgement.”

Still, Lowey spoke affectionately of Netanyahu, whom she has known for decades. Earlier this year, she traveled to Israel as part of a bipartisan congressional delegation commemorating the 75th anniversary of the liberation of Auschwitz.

“It was a very emotional — a very emotional time — for me,” said Lowey, who remembers chatting with the prime minister about her first trip to Israel as a member of Congress, during which they rode a helicopter together around the country. “It was just the two of us,” she remembered, “flying over and understanding what this issue was all about.”

Constituents in Lowey’s district, which includes a sizable Jewish population, are more than grateful for her commitment to their needs.

“She’s always available, which is always so special,” said Elliot Forchheimer, CEO of the Westchester Jewish Council. “People appreciated being able to hear from her and being able to have a quick conversation with her, which she would take back to her office and down to Washington as needed.”

Debra Weiner, who is active in the Westchester Jewish community, said Lowey’s voice will be “sorely missed” after she steps down. “A big hole will be left both in our Westchester community here and certainly representing us in the United States Congress.”

“Many of us felt that she was very much one of us,” said Michael Miller, executive vice president and CEO of the Jewish Community Relations Council of New York, recalling that Lowey would wear a Lion of Judah pin indicating her annual support for the United Jewish Appeal.

Lowey’s decision to work on the foreign operations subcommittee, Miller added, made her their “go-to person.” Miller also noted that Lowey had helped procure federal security funding for nonprofit religious organizations as the country saw an uptick in incidents of antisemitic violence.

“We owe her a tremendous debt of gratitude,” Miller said.

Jackie Shaw, executive director of the Interfaith Council For Action in Ossining, was equally appreciative of Lowey’s service.

“Through Nita Lowey’s hard work and dedication to underserved communities, IFCA was able to receive funding to address critical housing needs,” Shaw said in an email. “With these funds, IFCA was able to continue its mission of providing safe, quality affordable housing. Nita’s leadership will be sorely missed.”

In a statement, Rep. Rosa DeLauro (D-CT), echoed that sentiment. Lowey’s “career is marked by her fierce advocacy for working families and steadfast desire to give underrepresented communities a seat at the table,” she said, adding, “I will miss seeing her in the halls of Congress.”

Lowey looks back on her tenure in Congress with a strong sense of accomplishment, but pointed out that nothing came without a fight.

“I was one of a small group of women when I got to Congress,” the 16-term congresswoman said. The number of female representatives who now serve in the House, Lowey told JI, gives her faith that the country will be well-served as she prepares to retire. “They come to me and want to learn from me, but I’m continuing to learn from them as I try to help them adjust to this important responsibility.”

More broadly, Lowey emphasized the work she has done since 1989 for constituents in need. “I’m very proud of all the casework we’ve done just helping people,” she told JI. “There are so many thousands of people who have benefited because of the great casework we do in my district office.”

Not that she has any plans of becoming complacent in her final six months in office.

Rabbi Steven Kane, who works at Congregation Sons of Israel in Briarcliff Manor, said he spoke with Lowey just last week about a $100,000 grant his synagogue had received for security upgrades. Though Lowey is in her final term, Kane marveled at the fact that she had made the decision to personally inform him of the grant.

“We were very fortunate to have her,” he said.

Lowey has also been working to pass the bipartisan Middle East Partnership for Peace Act, which, she said, creates joint economic ventures between Israelis and Palestinians as well as “people-to-people” programs — all with the intention of encouraging a “strong foundation,” as Lowey put it, for a two-state solution.

The act, she seemed to suggest, would be one of the crowning achievements of her legacy. “I want to get all these things done before I leave,” she said. “So I’m working very hard.”