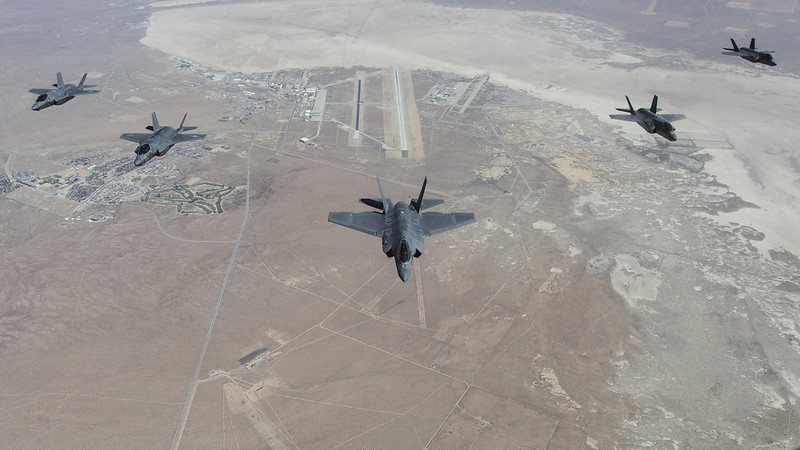 A fleet of F-35 "Joint Strike Fighter's" over Edwards Air Force Base, California.

The Senate on Friday passed the National Defense Authorization Act (NDAA) for 2021, a massive bill which provides $740 billion in funding for a range of defense-related issues for the next fiscal year, including at least $3.3 billion that will go to Israel security assistance.

Under the terms of the 2021 NDAA, the U.S. will provide a total of $3.3 billion in military assistance for Israel each year through 2028. At least $200 million for missile defense programs will be provided to Israel during the 2021 fiscal year — $73 million for the Iron Dome rocket defense system, $50 million for the David’s Sling anti-missile and anti-aircraft weapons system and $77 million for the Arrow 3 anti-ballistic missile system.

It also includes provisions that permit the transfer of additional precision-guided munitions to the Jewish state in the event of imminent need, and call on the president to include Israel on a list of countries eligible for an exception to weapons export regulations.

The package also sets the parameters for collaboration on defense acquisitions between the Pentagon and Israel’s Ministry of Defense and a joint directed energy weapons program.

A push by Senate Democrats over the summer to include an amendment preventing Israel from using U.S. security assistance funds to unilaterally annex territory in the West Bank was defeated.

President Donald Trump has repeatedly threatened to veto the bill if it does not include a repeal of Section 230 of the Communications Decency Act, which indemnifies internet companies against certain types of lawsuits, and has also objected to an amendment that would rename 10 military bases whose names honor the Confederacy.

Congress has not moved on either issue, but the large majorities by which both bills passed have led observers to expect lawmakers will be able to override a potential veto.

Sen. Rand Paul (R-KY) delayed the expected passage of the bill on Thursday in protest of a provision that would limit the president’s ability to remove U.S. troops from Afghanistan.