Shabtai Shavit says Israel doesn’t need to make ‘a big fuss’ about the U.S. selling fighter jets to the UAE 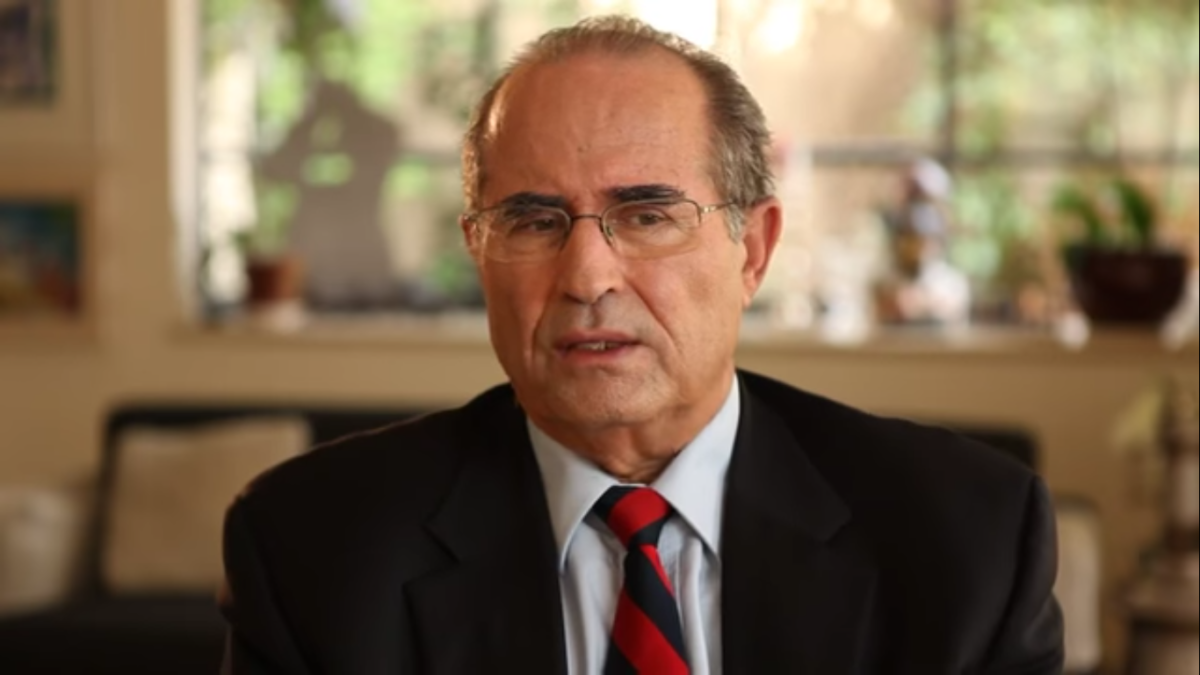 More than 25 years ago, then-Mossad chief Shabtai Shavit was heavily involved in the years of secret negotiations that led up to Israel signing a peace treaty with Jordan.

Until last month, that deal was the most recent peace accord Israel had signed with any Arab nation. Today, Shavit, 81, a private citizen for more than two decades, is watching with great interest — but little surprise — as Israel makes great strides toward peace with Gulf nations.

“During my tenure as director and even before, I was personally involved in all kinds of relationships between the State of Israel and most of the Emirates,” Shavit told Jewish Insider in a recent phone interview from his home in Ramat Hasharon. “Since those relationships were secret or clandestine, the Israeli party which was responsible was the Mossad.”

Almost 25 years after leaving the Mossad, Shavit is still fairly tight-lipped about his experiences with the agency. His upcoming book, Head of the Mossad: In Pursuit of a Safe and Secure Israel, divulges little about his activities and operations, save a few quirky anecdotes. But now retired, Shavit feels fairly free to weigh in with his views on politics, diplomacy and international affairs. He was one of three former Mossad chiefs who wrote a letter to House Democrats thanking them for opposing annexation of parts of the West Bank, and he has been outspoken in his criticism of Prime Minister Benjamin Netanyahu.

In an interview with JI, Shavit provided insight into the recent normalization deals with Gulf countries, the potential sale of F-35 jets to the United Arab Emirates and the ever-present threat of a nuclear Iran.

Shavit spent 32 years at the Mossad, and seven as its director, overseeing the agency during a period that included the first intifada, the Gulf War, the collapse of the Soviet Union, the bombing of both the Israeli Embassy in Buenos Aires and the AMIA Jewish community center in the city; and culminating shortly after the assassination of Prime Minister Yitzhak Rabin.

During one clandestine meeting between Rabin and Jordan’s King Hussein, Shavit writes, “on the eve of the signing of the Oslo Accords, King Hussein told Prime Minister Rabin, ‘Until now I’m the one who has had to suffer Arafat’s wet kisses — now it’s your turn!’”

While Shavit has little praise for either Netanyahu or President Donald Trump, he does not downplay the significance of the accords Israel will sign today with the UAE and Bahrain.

“I see this open relationship between Dubai and Abu Dhabi with Israel as only a first step,” he told JI. “I expect Trump and his people to catch this opportunity and to make use of it in order to convince other countries in the Gulf area, especially Saudi Arabia, to establish an open relationship with the State of Israel,” Shavit told JI in a conversation that took place before Bahrain announced its own normalization of ties with Israel. “Because this is a one-time opportunity, a real one-time window.”

And Shavit is optimistic that these new diplomatic relationships will further the ultimate goal of reaching a comprehensive peace agreement with the Palestinians.

“I believe the overall situation will be ripe for a solution also on the conflict between us and the Palestinians,” he said. “If Trump recognizes the significance of this kind of an achievement… he’ll deserve all the credit in the world.”

When it comes to establishing ties with regional powerbroker Saudi Arabia, “the first and the most important precondition for such a development to take place is building a structure of mutual influence,” he said. “And I do believe the present global situation, and regional situation, can serve as an opportunity to succeed in this kind of really huge endeavor.”

The potential U.S. sale of F-35 jets to the UAE has become a heavily debated issue in Israel following news of the accord. But Shavit isn’t surprised — or particularly concerned — at that element of the deal.

“Since the ultimate broker in this deal is President Trump, and he is a guy who looks at the world only as how it’s reflected in the bottom line… I don’t have any doubt that the financial benefits of selling arms to Dubai and Abu Dhabi and all others in the Gulf area is a very important interest and element in Trump’s thinking,” he said.

But such U.S. arm sales to Arab nations are far from new, Shavit said, citing President Ronald Reagan’s decision in the 1980s to sell $300 million worth of missiles to Saudi Arabia — despite Israeli opposition.

“We have to accept the fact that this consideration was one of the factors,” he said. “And we don’t have to do a big fuss around it.”

But the real significant point for Israel, Shavit believes, is that “we share, with the U.S. on the one hand, and with all Gulf countries on the other hand, with Saudi Arabia included, the common threat of Iran.”

While Shavit is highly critical of Netanyahu generally — referring to him in conversation with JI as “my so-called leader” — he notes that they certainly agree on one thing: that Iran is the biggest existential threat facing the State of Israel today.

But Shavit — who lived in Iran in the 1960s for several years while working for the Mossad — certainly disagrees on the correct approach. The former Mossad chief has publicly declared that he believes there is no stopping Iran from acquiring nuclear weapons.

“I believe that it’s too late to do it,” he told JI. “I don’t see any global coalition or even regional coalition that would go for it.” He does not believe “sanctions alone” can have enough of an effect, and doesn’t think Trump would “decide to take military action in order to eliminate their capability.”

The U.S. administration, he said, does not have the backing for such a move from Europe nor from China or Russia. “I don’t see in the foreseeable future any kind of a coalition of countries that would be ready to go to the end in order to finish this,” he said. “Israel alone — I don’t believe that we can do it alone.” Not because Israel lacks the capability to carry out such a strike, he added, “but because we cannot become the pariah state of the world.”

The 2015 Iran deal brokered by President Barack Obama, Shavit said, bought the world some time — but it wasn’t enough.

“Obama’s deal gave the world another 10-15 years,” he said. “And 10-15 years in the history of mankind is a very long period… It was not the ideal kind of a deal, but it was better than nothing,” he added, noting that at the time there were few alternatives. “Obama wouldn’t have gone to war either on this issue.”

Trump’s decision in 2018 to pull out of the deal, Shavit posited, made the situation worse.

“It made it worse because it annoyed the Iranians,” he said. “I am sure that since Trump went out of the deal they started again — clandestinely of course — in small steps, they are working in building their nuclear capabilities. I don’t have any doubts.” And the Iranians, Shavit surmised, also believe that Trump will not take decisive military action against them. “Which allows them to take the risk of working on the capability even today.”

More than 25 years after the peace treaty with Jordan was signed, Shavit is disappointed that ties between the nations are not closer today.

“The deal is still in effect but it’s not as I envisaged it 25 years ago,” he said. “I put the blame on our [current] prime minister. Peace was the biggest achievement and credit to Yitzhak Rabin,” Shavit added, claiming that Rabin’s role in the peace agreement is “one of the reasons why the present prime minister does not do what’s necessary in order to push it to the foreground or develop it or extend it — but rather the opposite.”

Shavit said he sees no reason “why the nature of the present relationship between the State of Israel and Jordan should be at this present level, which is very low.” The two nations, he said have many mutual interests, “and there are so many things that can be done to enhance the peace, and to turn it into a real peace.”

It has been close to a quarter century since Shavit retired from the Mossad, and in many ways he belongs to the old guard of elite senior officials who once ran the nation. He was the last of the Mossad chiefs whose tenure was clad in secrecy during his term — and whose identity was forbidden to be published.

Today, much of the world knows the name and face of Yossi Cohen, the current Mossad chief who regularly makes public appearances. Shavit laments the change in approach today — and its many implications.

“In my opinion it was a mistake to divulge the identity of the Mossad chief,” he said. While he was in office, “I visited the world over, flying, driving, visiting, and I felt completely safe because no one knew my identity. Today it’s by far more difficult for the incumbent — they cannot do it like I did it. They have to take all kinds of precautions which makes life far more difficult.”

He also does not favor the approach Netanyahu has taken in recent years of revealing Mossad activities — including a dramatic 2018 press conference where he disclosed a recent intelligence-gathering operation in Iran.

“This is one of the things that should not be done,” he said. “It’s a mistake to use intelligence just in order to show to the rest of the world how smart you are and how successful you are.”

One of the most significant benefits of extensive intelligence, he said, “is its capability to build deterrence. When you divulge everything you have — and your adversary knows all about you and your capabilities — coping with it becomes more and more difficult.”