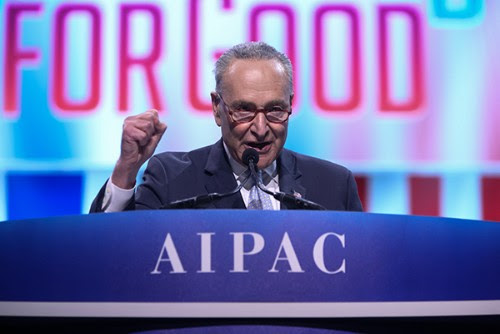 Senate Minority Leader Chuck Schumer is expected to highlight the need to maintain bipartisan support for Israel in his speech on Monday night. The following are some excerpts of Schumer’s slated remarks, shared exclusively with Jewish Insider:

“Support for the friendship between our countries does not depend on which party you belong to. No matter what: we must keep the U.S.-Israel relationship bipartisan. This has been a mission for me and it must be for you, and all friends of Israel.”

Former U.S. Ambassador to Israel Dan Shapiro tells JI: “People ask me if there is a collapse of bipartisan support for Israel. I don’t think so. But I do think there is a rise in partisan tension about what it means to support Israel. Those are not the same thing. I’ll be at AIPAC engaging in conversations with people from a range of backgrounds and with a variety of views, including some that differ from my own. I expect to find a lot of consensus around support for a close U.S.-Israel relationship, U.S. military assistance, deepening our security partnership which helps both countries, expanding our economic and technology ties, and rejecting calls to delegitimize Israel.”

Opposing Trump’s peace plan is OK, according to Shapiro: “I will also make clear how critical it is that we help keep a two-state solution that will give both Israelis and Palestinians self-determination, dignity, and security, alive and viable until new leaders can attempt to negotiate it. That is the only way Israel will remain secure, Jewish, and democratic and it is necessary to sustain the values-based U.S.-Israel relationship into the future. The Trump plan fails this test. Supporters of Israel and those concerned about U.S. interests should have no hesitation to say so at AIPAC or anywhere else.”

Persona non grata: Speaking to AIPAC’s National Council, Israeli Ambassador to the United Nations Danny Danon slammed the presidential frontrunner. “We don’t want Sanders at AIPAC. We don’t want him in Israel. Anyone who calls our prime minister a ‘racist’ is either a liar, an ignorant fool, or both,” Danon said, according to a press release he distributed on Sunday morning.