At Busboys and Poets, the duo talk Israel and antisemitism 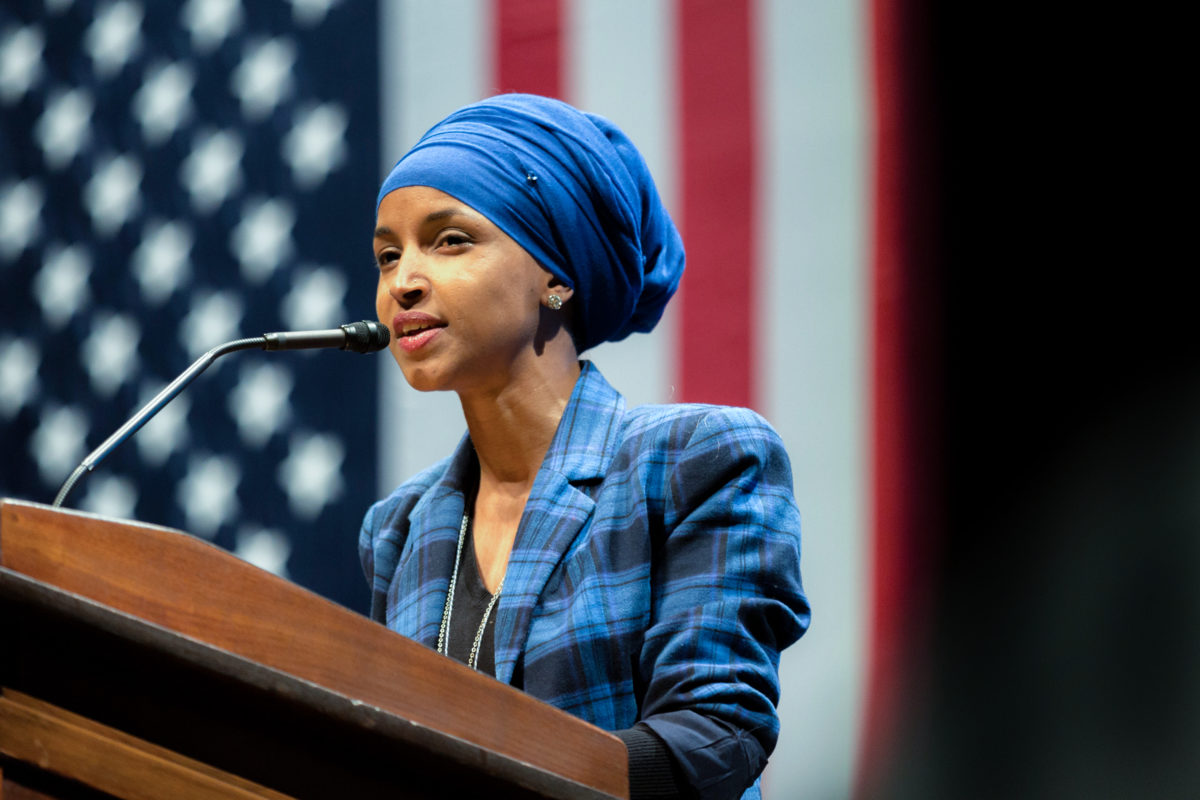 Several hundred supporters of Representatives Rashida Tlaib and Ilhan Omar crowded into Busboys and Poets, a bookstore cafe in Washington, D.C., on Wednesday night to hear the pair speak at a “Progressive town hall.” Some attendees stood waiting for over an hour outside in the February cold to enter the venue.

“We’re here, we’re here to stay and represent the voice of the people who have been silenced for many decades and generations,” Rep. Omar announced to raucous applause.

The night was billed as a conversation on a wide array of progressive issues but it was questions on antisemitism and Israel that ignited the fiercest passions, from Reps. Tlaib and Omar and those in the audience. “It is about the Benjamins,” shouted one audience member to laughter and acclaim, referencing Rep. Omar’s now-deleted tweet linking Congressional support for Israel to Jewish influence and lobbying. To this, Reps. Omar and Tlaib both smiled along furtively.

The two freshman members reflected on their few short months on the Hill in which they’ve both found themselves embroiled in controversy surrounding criticism of Israel, their support for the BDS movement, and for comments seen by many, including dozens of fellow Democrats, as anti-Semitic. To begin the discussion among a boisterous and friendly audience, the moderator asked what “we as a community here can do to support you criticizing Israel for some of the war crimes that it has done so that it’s not seen as ‘you’re anti-Semitic’? Because you’re not criticizing the religion, you’re not criticizing Jewish people, you’re criticizing the government policies.”

Rep. Omar elaborated that when she hears her Jewish constituents offer criticisms of Palestinians, she doesn’t automatically equate them as Islamophobic but is “fearful” that people are painting her as anti-Semitic because she is a Muslim. Omar continued, “What I’m fearful of — because Rashida and I are Muslim — that a lot of our Jewish colleagues, a lot of our constituents, a lot of our allies, go to thinking that everything we say about Israel to be anti-Semitic because we are Muslim,” she explained.

“To me, it’s something that becomes designed to end the debate because you get in this space of – yes, I know what intolerance looks like and I’m sensitive when someone says, ‘The words you used Ilhan, are resemblance of intolerance.’ And I am cautious of that and I feel pained by that. But it’s almost as if, every single time we say something regardless of what it is we say…we get to be labeled something. And that ends the discussion. Because we end up defending that and nobody ever gets to have the broader debate of what is happening with Palestine.”

“So for me, I want to talk about the political influence in this country that says it is okay to push for allegiance to a foreign country,” Rep. Omar exclaimed, seeming to suggest, as Tlaib had in a tweet of her own, dual loyalty among a particular group of Americans. Loud rounds of applause and shouts of affirmation punctuated the event’s heavy focus on Israel.

“So I know many [Members of Congress] were fighting for people to be free, for people to live in dignity in South Africa… So I know that they care about these things. But now that you have two Muslims who are saying, here is a group of people that we want to make sure that they have the dignity that you want everybody else to have, we get to be called names and we get to be labeled as hateful. No, we know what hate looks like!”

These comments come as Rep. Omar continues to deal with the fallout from her controversial tweets, which were widely regarded as anti-Semitic. In January, Rep. Tlaib also came under fire for an anti-Semitic remark in which she charged that members of Congress had “dual loyalty” when they voted for anti-BDS legislation.

On Wednesday night, the Michigan lawmaker thanked Jewish groups that support her. “I want to thank so many of our Jewish allies out there that stood up with me and they continue to stand up with us and tell the truth that this conversation and debate around human rights for everyone,” she said.

Reps. Omar and Tlaib were joined onstage by Congresswoman Pramila Jayapal (D-WA), the first Indian-American woman to serve in the House, and Congressman Mark Pocan (D-WI), co-chair of the House’s LGBT Equality Caucus. At the event, Rep. Pocan made note that two years ago he led a delegation of five members of Congress to Ramallah, Hebron and East Jerusalem. “As someone who’s not religious and [is] gay, it doesn’t seem to be natural that Palestine would be an important issue,” Rep. Pocan said, “but it’s an important issue because it’s a human rights issue.”

Laura Kelly is the Capitol Hill reporter at Jewish Insider.

Editor’s note, 3/1/19 at 3:03PM:
Jeremy Slevin, Rep. Omar’s communications director reached out with the following statement:
“The statement, presented as fact, that Rep. Omar “smiled furtively” is not accurate and frankly dangerous. As you know, Rep. Omar has apologized unequivocally for using that phrase. When someone shouted it from the audience last night, she did not respond and in no way endorses speech like that. Blaming the Congresswoman for a heckler’s hateful comments is grossly unfair and below the belt.”

After reviewing our footage of Rep. Omar’s reaction to the audience member’s “it is about the Benjamins” comment, we stand by our description of it and the use of the word “furtive.” Following the comment, Rep. Omar smiles, half-heartedly laughs, and makes a face that suggests “guilty nervousness,” the very definition of furtive. Contrary to Slevin’s accusation, the Congresswoman was not blamed for anyone else’s actions, her’s were merely described and accurately so.