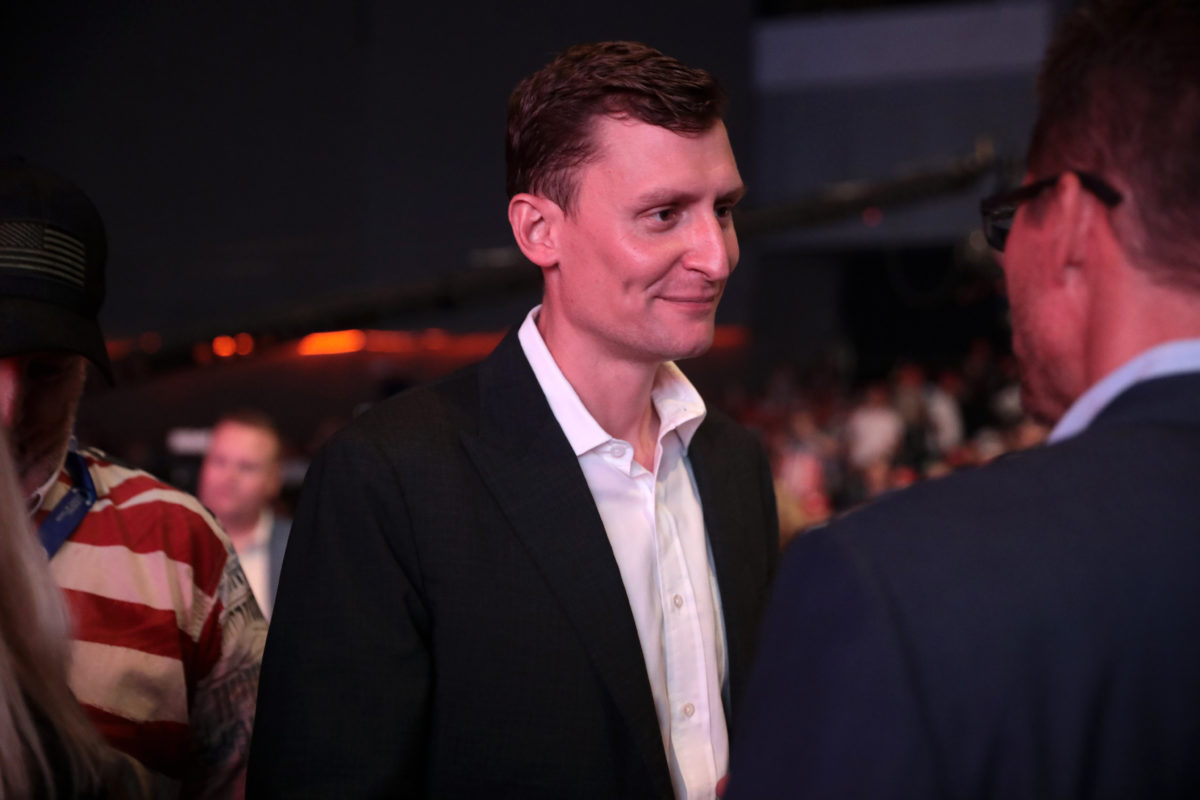 Blake Masters speaking with attendees at the "Rally to Protect Our Elections" hosted by Turning Point Action at Arizona Federal Theatre in Phoenix, Arizona.

Blake Masters, the Republican nominee for U.S. Senate in Arizona, has claimed he is unfamiliar with the controversial founder of a social media platform for extremists who endorsed his campaign last month.

In late July, Masters earned a nod of approval from Andrew Torba, the chief executive of Gab, a far-right Twitter alternative that is widely viewed as a hotbed of white nationalist sentiment. While Masters rejected the endorsement a few days later and insisted he had “never heard of” Torba, the incendiary social media entrepreneur has since countered that Masters’ claim is a “flat-out lie.”

“Blake Masters knows exactly who I am,” Torba wrote in an Aug. 4 Gab post, which has since been removed from the site. “We had a long conversation on Twitter Spaces live a few months ago. Mega cringe cucking here, but whatever, I still want him to win for the great people of Arizona and for the right to control the Senate.”

Despite the assertion, Masters’ campaign has continued to stand by his original remarks — as Katie Miller, an advisor to the 36-year-old Senate candidate, affirmed in a statement on Tuesday to the Arizona Republic, which first reported the existence of Torba’s Gab post. “Blake interacts with tens of thousands of people on Twitter spaces — the sentiment remains that he doesn’t know Torba and rejects his support,” she said.

It would not be unreasonable, however, to expect that Masters might remember his nearly three-minute exchange with the founder of Gab during a live Twitter conversation in January — a recording of which was obtained by Jewish Insider on Tuesday. Their discussion was focused largely on content moderation and censorship, even as Torba introduced himself to Masters with an unsubtle nudge to join his platform, which is regarded as something of a repository for extremists banned from other platforms.

“My question for Blake is, Blake, when are you getting on Gab?” Torba, who seemed eager to plug his company to a possible future senator, asked after entering the Twitter Spaces discussion, which was hosted by Adam Korzeniewski, a former Trump administration official and political consultant.

Masters chuckled. “I’ll check it out. I’m definitely not, I mean, I’ve never used it. I’m definitely not anti — I think I’m on Gettr,” he said, referring to a right-wing social media network founded by a former aide to former President Donald Trump. The conservative author and venture capitalist, who is backed by Trump, steered the conversation with an inquiry of his own, based on comments that Torba had made about social media “discrimination” and “deplatforming” when he joined the call.

“I have a question for you, because I agree with you that, like, Apple and I guess the other one would be the Google Play store or whatever, they shouldn’t be allowed to discriminate against a company,” said Masters, who has established himself as a vocal critic of Big Tech as a Senate candidate. “I’m curious,” he continued, “presumably you’re not banned from the app store, right?”

Torba bemoaned that Gab’s “entire developer account is banned from Apple,” adding that he is “not even allowed to make submissions to the app store.”

Following a brief technical back-and-forth about how Gab functions independently from the mainstream app stores, Masters appeared to express sympathy for Torba’s challenges at the helm of the social networking site. “I hadn’t realized it was that bad,” Masters said. “That’s obviously super messed up. I don’t think Apple should be allowed to do that.”

Masters has advocated for legislation that would treat social media platforms like common carriers, “requiring them to provide reasonable nondiscriminatory access to all users,” as he wrote in an opinion piece for The Wall Street Journal last year.

The Anti-Defamation League has described Gab — whose users have included the gunman who killed 11 people and wounded six at the Tree of Life Synagogue shooting in Pittsburgh — as “rife with white supremacist” and “antisemitic bigotry.” In an interview with MSNBC last month, Jonathan Greenblatt, the ADL’s CEO, said Torba “is one of the most toxic people in public life right now.”

The Gab executive, who identifies as a Christian nationalist, has frequently expressed anti-Jewish views. He recently argued, for instance, that Jews are not welcome in the conservative movement unless “they repent and accept Jesus Christ as their lord and savior.”

Masters made no objection to any of Torba’s past controversial statements during the Twitter discussion. Instead, near the end of the exchange, he launched into a mocking imitation of what he described as “the dumb sort of free-market libertarian response” to his own assessment of tech censorship.

In a text message to JI on Tuesday evening, Miller, the Masters campaign adviser, reiterated that Masters “interacts with tens of thousands of people on Twitter spaces — the sentiment remains that he doesn’t know Torba and rejects his support.”

“Why is the Jewish Insider — a supposedly Jewish publication — consistently amplifying White Nationalists and giving them a voice?” she wrote.

Miller did not address whether Masters recalls speaking with Torba now that details of their relatively brief discussion have been uncovered.

While Torba’s personal account is banned from Twitter, he was apparently capable of engaging in the Spaces conversation with a handle that Korzeniewski identified as “Gab.com” when he invited the social media CEO, who introduced himself using his last name, to join the discussion.

Torba left the conversation soon after Masters, who was one of two special guests hosted by Korzeniewski, had delivered his libertarian sendup. The broader discussion, which ran for more than an hour, also featured Joe Kent, a Trump-endorsed House candidate who recently defeated Rep. Jaime Herrera Beutler (R-WA) in Washington’s 3rd Congressional District. Kent is on Gab.

Masters once identified as a staunch libertarian but turned to right-wing conservatism during the Trump years.

His past writings from college — including an essay in which he referenced a “poignant quotation” from Nazi leader Hermann Goering and cited an antisemitic conspiracy theorist — dogged his campaign throughout the primary and could be a vulnerability as he prepares to go up against Sen. Mark Kelly (D-AZ) in the hotly contested November election.

Recent support from noted extremists such as Torba and Andrew Anglin, the neo-Nazi publisher of The Daily Stormer, have also drawn scrutiny. In a June blog post, Anglin gave his “forceful endorsement” of Masters’ campaign, writing that the Republican Senate candidate, who has embraced a range of hard-right policies on immigration, elections and other issues, “is getting better and better.”

Masters, who has recently sought to temper some of his positions, including on social security and abortion rights, said he would not accept Anglin’s endorsement in comments to the Arizona Republic last month. The wording of Masters’ rejection was identical to his disavowal of Torba, which he gave to a local news site, The Arizona Mirror, just a few weeks later.

Anglin, who is a notorious troll, wrote a follow-up post in which he rejected Masters’ rejection of his endorsement.

In addition to Masters, Torba has expressed support for a number of Republican candidates in Arizona, including Kari Lake and Mark Finchem — the nominees, respectively, for governor and Secretary of State — as well as state Sen. Wendy Rogers. A spokesperson for Lake renounced the endorsement last month, while Finchem and Rogers both said they were “honored” to receive such backing.

Torba has also stirred controversy in Pennsylvania’s gubernatorial race, thanks to his close connection with the Republican nominee, state Sen. Doug Mastriano, a Christian nationalist whose campaign has faced criticism for paying Gab at least $5,000 for consulting services.

In response, Mastriano released a statement insisting that “Torba does not speak for me or my campaign” and claiming to “reject antisemitism in any form.” He deflected blame for the controversy, however, on “smears by the Democrats and the media.”

Torba, meanwhile, reacted to the blowback with a series of blatantly antisemitic videos released in late July. “My policy is not to conduct interviews with reporters who aren’t Christian or with outlets who aren’t Christian,” he reportedly said in one live-streamed commentary. “Doug has a very similar media strategy where he does not do interviews with these people.”

Even as a growing number of Torba’s preferred candidates have distanced themselves from him in recent weeks, he seems to have been particularly frustrated with Masters — who, on top of his rejection, does not appear to have joined Gab since their exchange.

“Just want you guys to be aware of who bend the knee to media pressure and who does not,” Torba wrote in his since-removed Gab entry, referring to Masters’ suggestion that they had not spoken before. “What is concerning is that Blake can flat-out lie like this, he’s already becoming a typical politician before he is even elected!…”

Listen to the audio here: