The move by The Daily Stormer publisher is a play to try to exert influence in a GOP moving to the right, experts in extremism contend 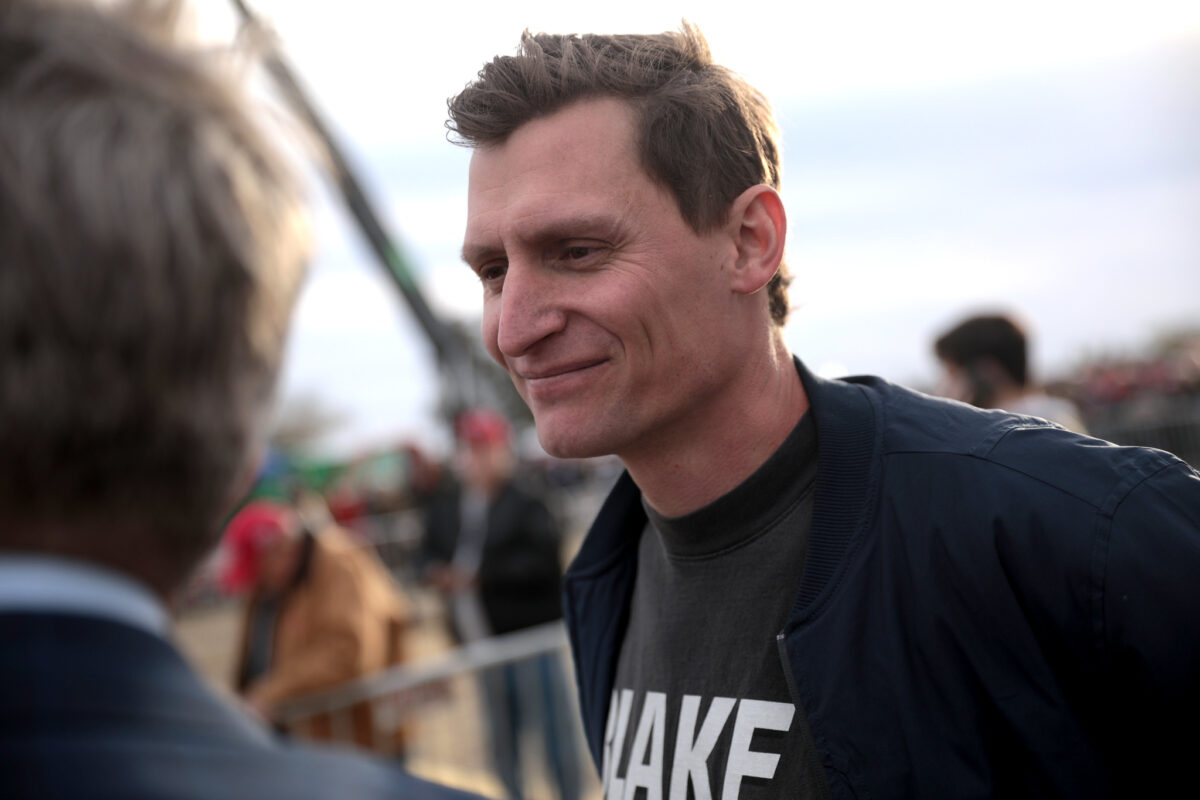 Blake Masters speaking with attendees at a "Save America" rally at Country Thunder Arizona in Florence, Arizona.

Andrew Anglin, the neo-Nazi publisher of The Daily Stormer, one of the internet’s most notorious hate sites, announced his endorsement of Blake Masters in an enthusiastic blog post last month, declaring that the Republican candidate for U.S. Senate in Arizona “is getting better and better.”

“I cannot give a more forceful endorsement, and I demand that anyone in Arizona (who is not some kind of known neo-Nazi or whatever) get in contact with his campaign and see what kind of help he needs,” Anglin wrote in a previously unreported entry, published June 9.

The white nationalist agitator was gleefully responding to a recent viral incident, caught on video, in which Masters violently confronted a 73-year-old Democratic activist and former high school counselor, Peter Jackson, who had appeared at a local GOP event in Arizona’s Pima County wearing an anti-Trump hat and a Black Lives Matter T-shirt. While his ensemble drew the ire of those in attendance, Masters, 35, claims he lunged at the uninvited guest, who refused requests to leave, after seeing him “hit a woman in the jaw” — an allegation Jackson has denied.

In his blog post days after the altercation, Anglin dismissed Jackson as “scum” and noted admiringly that Masters had “moved in to take care of business” when he grabbed the man’s neck and forced him to the ground, according to footage of the confrontation. 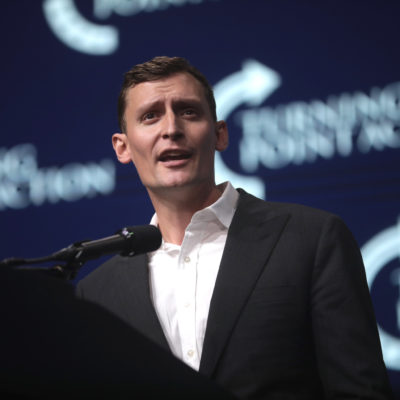 “This is exactly the kind of man this country needs,” Anglin said of Masters. (Jewish Insider is not linking directly to Anglin’s posts.)

It is hardly surprising that Anglin, 37, would be inspired by such aggression, even if he spends most of his time behind a computer. The reclusive blogger is known to have orchestrated a series of vicious harassment campaigns against an array of unsuspecting victims, drawing several high-profile lawsuits that threatened to leave him financially crippled. Though he has evaded litigation for years while in hiding, Anglin has struggled to keep his operation online since he helped orchestrate the deadly “Unite the Right” rally in Charlottesville, Va., five years ago, as domain registrars have continued to drop the site.

But while his current whereabouts are unknown, Anglin — a rabid antisemite who admires Adolf Hitler, believes “Jews should be exterminated” and once described “a craving to return to an age of violence” — continues to exert whatever influence he can muster as he cranks out a seemingly unending stream of racist and misogynistic incitement.

“Anglin habitually uses The Daily Stormer to celebrate and encourage right-wing political violence,” Luke O’Brien, a journalist who investigates political extremism and has written extensively about Anglin, said in an email exchange with JI on Thursday. “He has a tepid blanket disclaimer on the front page of his site in an attempt to create legal cover for himself.”

The comparatively tame entry in support of Masters, an author and venture capitalist now mounting his first bid for public office, “doesn’t mean much in a traditional sense,” according to O’Brien. “He’s not going to be turning out the vote.”

“But it is notable for other reasons, especially in this context,” O’Brien explained. “Anglin is a bellwether for authoritarianism in America. He also tends to signal what the master plotters in the global anti-democratic movement have in mind to damage democracy.”

The new endorsement isn’t Anglin’s first foray into political advocacy, despite an obvious disdain for the democratic process. The reclusive blogger was an early and outspoken supporter of former President Donald Trump, for example, and once expressed admiration for former Rep. Steve King (R-IA) as “basically an open white nationalist,” after the now-disgraced Iowa congresswoman tweeted that “culture and demographics are our destiny.”

But as the GOP has shifted dramatically to the right in recent years, Anglin’s latest announcement represents what may be a more calculated effort to “mainstream his views,” according to Marilyn Mayo, a senior research fellow at the Anti-Defamation League’s Center on Extremism. By endorsing Masters, she explained, Anglin is attaching himself to a candidate who has openly espoused nativist rhetoric and championed hard-right causes that intersect with his interests.

“Anglin exploits that to make it seem like extremism is being normalized,” Mayo said in an interview with JI. “Unfortunately, that happens to be true these days.”

Michael Edison Hayden, a senior investigative reporter and spokesperson for the Southern Poverty Law Center, agreed that Anglin’s motives likely extend from a sense of identification with Masters that he can use to his advantage, even if the feeling isn’t mutual.

“White supremacists like Anglin have long telegraphed their desire to occupy our institutions, and the fastest way to get there is through political campaigns,” Hayden told JI. “He apparently sees an ally in Masters. I’d be very curious to see whether Masters will make any effort to disavow him.”

Masters’ campaign did not respond to a request for comment.

The political newcomer, who launched his campaign last July, got off to a somewhat more sluggish start than his top two Republican rivals in the crowded race, including Mark Brnovich, the attorney general of Arizona, and Jim Lamon, the well-resourced solar executive.

But Masters gained a pivotal boost last month thanks to a high-profile endorsement from Trump, propelling him into first place with just over a month remaining until the August 2 primary. Meanwhile, his campaign has otherwise been buoyed by more than $13.5 million in outside support from a former boss and mentor, the billionaire tech investor and GOP donor Peter Thiel.

Masters is now cementing his status as a frontrunner, even while he has carved out a lane for himself as one of the most extreme Republican candidates in the race, if not the country. Over the past few months, he has drawn scrutiny for a growing number of controversial assertions that often seem tailor-made to stir outrage as he gains prominence on the national stage.

Whether he is openly identifying as a “nationalist” in one of his eerily provocative online ads, falsely declaring that “Trump won in 2020,” denouncing critical race theory as “anti-white racism,” agreeing with an interviewer that campaign finance laws are akin to Kristallnacht or promoting the “great replacement” theory — which he describes as Democratic conspiracy to “change the demographics of this country” — Masters has insisted he is the only candidate willing to embrace such positions with unapologetic disregard for reputational consequences.

Even as his views have evolved dramatically since he abandoned his libertarian roots and turned to Trump’s increasingly popular brand of right-wing populism, Masters — a leading figure in the so-called “national conservative” movement — long appears to have hewed to a defiantly inflammatory argumentative style that has remained consistent for decades. 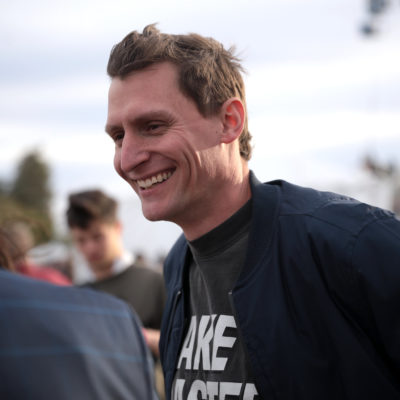 The evolution of Blake Masters

As far back as 2006, for instance, Masters was offering up a particularly tendentious thesis in an essay for a libertarian website where he referenced a “poignant quotation” from Nazi leader Hermann Goering, cited a noted conspiracy theorist who has been accused of espousing antisemitic tropes and casually suggested that “the U.S. hasn’t been involved in a just war in over 140 years.”

Masters has since acknowledged that, as a 19-year-old undergraduate, he went “too far” in arguing that America’s involvement in most armed conflicts had been unjustified. But he has faced more recent criticism for equally jarring statements. Among other things, Masters has raised eyebrows for praising the Unabomber’s tech manifesto in one notable interview, while in another, blaming gun violence on “Black people, frankly” — comments for which Anglin has shown a particular sense of appreciation.

“Masters is woke on Uncle Ted,” Anglin wrote last month on The Daily Stormer, using a term of endearment to describe the Unabomber, whose name is Ted Kaczynski. In the June 8 blog post, titled “Blake Masters on the Root of America’s Gun Violence Problem: ‘Black People, Frankly,’” Anglin further commended the Senate candidate for “dropping the red pills we all wanted to hear: the truth about the root of ‘America’s gun violence problem.’”

Elsewhere, he expressed admiration for Thiel, with whom Anglin is at least tangentially connected, according to O’Brien, the journalist who covers extremism. “Anglin is a propagandist who lets the young neo-Nazi and white nationalist elements of their right-wing movement know which way to tack,” he told JI. “This is not happenstance. Anglin has worked directly with Thiel’s associates in the past.”

Blake Masters’ provocations reach back to his college days

In his post, Anglin, expressed support for another Thiel protégé, J.D. Vance, the Hillbilly Elegy author who clinched the Republican nomination in Ohio’s hotly contested Senate race in May. “Peter Thiel’s losing streak is up,” Anglin proclaimed. “I don’t agree with everything the man endorses, and I don’t think he agrees with everything he endorses, but JD Vance and Blake Masters are going to change the entire game.”

J.D. Vance on Trump, Israel and his chosen faith

“Masters is better than Vance, frankly,” he said, noting that Masters is “married to a white women [sic] with sons despite some possibly questionable mannerisms.” (Vance’s wife is Indian American.)

Later, Anglin added that he is “now calling” his preferred candidate “Master Masters,” a nickname he invoked in his endorsement the following day.

A spokesperson for Vance’s campaign declined to comment on the record.

Masters is one of five Republican primary candidates vying to challenge Sen. Mark Kelly (D-AZ), a potentially vulnerable Democratic incumbent, in what is widely expected to be among the most competitive races of the cycle.

Anglin launched The Daily Stormer — its title a reference to the actual Nazi publication Der Stürmer — in 2013. Even as domain registrars have continued to drop the site over his involvement in the Charlottesville rally, the neo-Nazi has nevertheless managed to stay afloat. He is now using a country code top-level domain — or URL suffix — for Rwanda (as in “.rw”).

Wherever Anglin himself is, his vocal enthusiasm for Masters’ campaign suggests that he is still trying to exert a measure of disruption on American politics, as extremist views have, in many ways, crept into the Republican mainstream.

Hayden, the spokesperson for the Southern Poverty Law Center, cautioned that such efforts can result in violence. “Obviously, when Anglin sends his followers to join something, it can lead to danger,” he warned. “We’re found violent people hanging out on his forum in the past.”

Following publication, Jeff Giesea, a protégé of Peter Thiel who was named by Luke O’Brien as having collaborated with Andrew “Weev” Auernheimer, the hacker associated with The Daily Stormer, pushed back on the claim in an email to JI.

“I have never collaborated with Weev,” Giesea said. “I hardly know who he is. I did have a call with him once around 2015 when I was conducting research for my NATO paper on memetic warfare, which was published in early 2016. The call with him was one among many research interviews I conducted at the time. The focus of my questioning of Weev was along the lines of how he would troll ISIS. That’s it. He was introduced to me as an expert on info warfare and that was the context. There was no collaboration with him on that or on anything else, much less anything political. Nothing.”

Giesea did not address JI’s requests for clarification except to say: “At the time, I did not know he had anything to do with the Daily Stormer,” which he described as “vile and disgusting.”

We have updated the story to reflect Giesea’s denial.