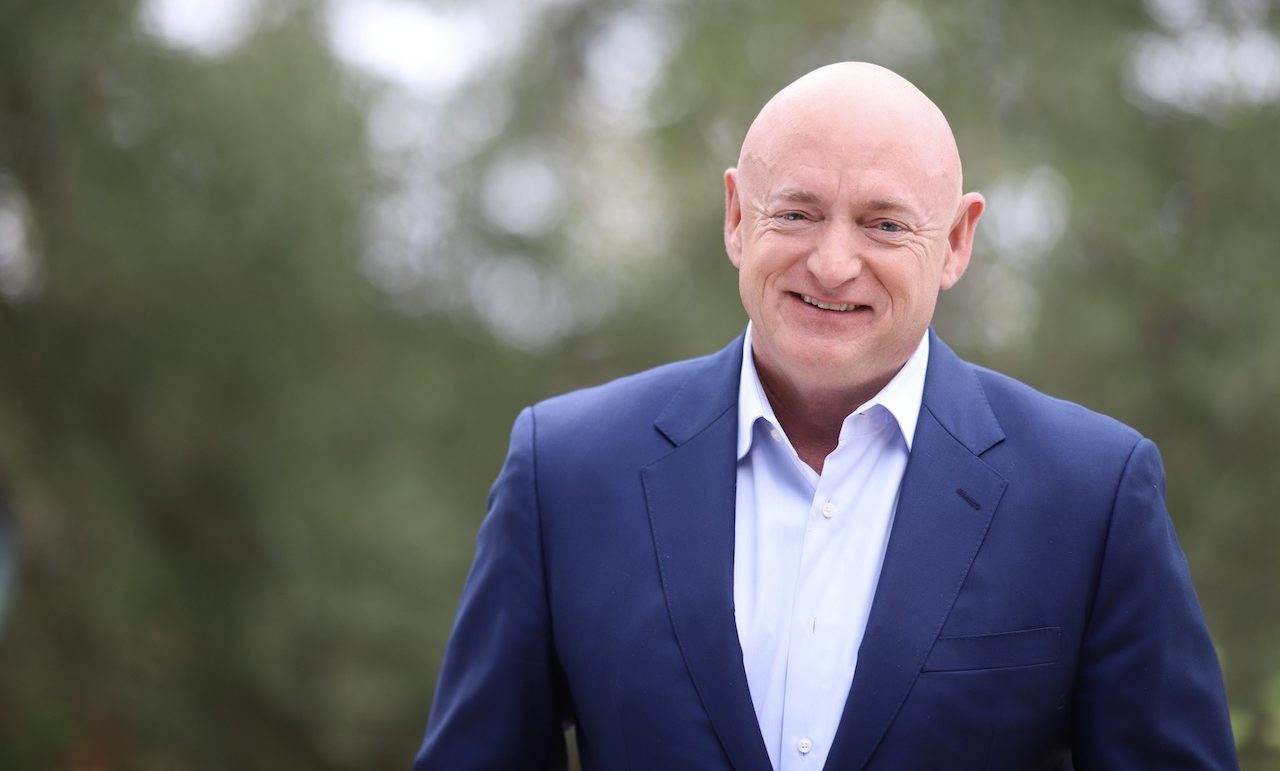 Mark Kelly is preparing for a different kind of liftoff

“We go into quarantine before we launch into space,” said the 56-year-old astronaut, who flew missions for NASA between 2001 and 2011. “I’ve been in quarantine, probably, up to three weeks at a time, then you go into space for, in my case, a couple weeks — and then you get back. It could be over a month of being away from people.”

Such experience has served Kelly well during the coronavirus pandemic, as he runs a mostly virtual campaign for Senate from his home in Tucson, Arizona, where he lives with his wife, former Rep. Gabrielle Giffords (D-AZ).

“Sometimes unexpected stuff happens and you just gotta deal with it,” Kelly told Jewish Insider in an interview. “I also think that sometimes a crisis is an opportunity to innovate and do certain things better — so, where we can’t interact with people in person, we’re figuring out better ways to do it online.”

If Kelly sounds sanguine, it may be because — as a former Navy pilot who flew combat missions in the Persian Gulf War — he is used to operating under pressure.

But it could also be that he knows he is in as good a position as any to unseat Martha McSally, the Republican senator who assumed office last year when she was picked to succeed the late Sen. John McCain.

Though he has never run for elected office, Kelly’s favorability numbers have been steadily rising since he entered the race in mid-February of last year. The latest polling puts him at 51% — 13 points ahead of McSally, the former Air Force pilot and congresswoman who has positioned herself as a Trump loyalist. McSally failed to beat Democrat Kyrsten Sinema in the 2018 Arizona Senate race, which does not bode well for her prospects ahead of the November election.

Kelly, who is running unopposed in the Democratic primary on August 4, has also outraised McSally, having raked in a staggering $31.3 million, according to the Federal Election Commission. By comparison, McSally, no slouch, has raised nearly $19 million.

The Democrats are hoping to flip at least four Senate seats this cycle in an effort to turn the upper chamber blue — and they are pinning their hopes on Kelly to help make that happen.

“I think Mark Kelly can win,” said Kim Fridkin, a professor of political science at Arizona State University, citing his strong polling numbers along with his formidable war chest. “McSally is not that popular a candidate, was not an effective campaigner in 2018, has not moved to the middle of the ideological spectrum — and these facts all make it difficult for her to win the Arizona Senate seat this year.”

Kelly says he never planned to run for office. “It’s not the thing I wanted to do when I was a little kid,” he said. “When I was about 7 years old, I wanted to be an astronaut.”

He fulfilled his dream in the early aughts, after his Navy service, when he flew to space on the first of four missions, the last of which was on the Space Shuttle Endeavour.

“But sometimes,” he said, “our country gets to a certain point.”

“We clearly have some big problems we’re trying to address and fix,” Kelly said. “I often look at Washington, D.C., the White House and Congress in a situation where they’re not able to work well together. There’s a high level of partisanship. There’s a high level of influence from corporate PACs and big companies. And it just makes our democracy somewhat dysfunctional.”

He hopes to focus on a number of issues if he is elected, including gun safety — a matter that is close to him given that his wife was nearly killed when she was shot in the head in an attempted assassination nine years ago.

Last March, Americans bought about 2 million guns amid mounting fears with regard to the coronavirus — a development Kelly regards with concern.

“I’m a supporter of the Second Amendment,” he made sure to qualify. “But the thing that worries me when that happens is when you have folks that are inexperienced with firearms, and they buy a gun and they have it in their house and they have kids and they don’t properly secure it. You run into an increasing number of accidents and fatalities.”

Kelly’s other concerns include foreign policy in the Middle East, healthcare and climate change, which he regards as a “national security” issue. “These are challenging problems,” he said. “I often think that some of them are as hard as sending people to the moon.”

He believes that it will be necessary to achieve some sort of bipartisan consensus if he makes it to the Senate.

“You have to work across the aisle to do the job that was laid out for you in the Constitution,” he said matter-of-factly. “I often see Congress does a poor job at this. They have to do better, and the only way you’re going to do better is to elect people that are willing to work in a bipartisan way and are not beholden to the political party.”

He draws on his wife’s experiences in justifying this approach. “She would work with the Republicans,” he said, citing Giffords’s close relationship with Rep. Ted Poe, the former Texas congressman who retired last year.

In conversation, Kelly steers clear of criticizing President Donald Trump too harshly. He believes, for instance, that it was “a rather poor decision” to pull out of the Iran nuclear deal. “It had some issues,” he said, adding that “we should try, through another administration in the White House, to get back to a deal with the Iranians by working with our international partners and our allies.”

With regard to the killing of Iranian Gen. Qassim Soleimani, Kelly was equally measured. “He was a bad actor in the region for a long period of time,” he said. “It’s good that he’s not in the job anymore.”

But according to Ron Ober, president of Policy Development Group, a regional public affairs firm, Kelly’s equanimity is more a matter of temperament than political calculation.

“His modus operandi isn’t going to be to bash anybody,” said Ober, an active member of the Jewish community in Arizona who previously worked as a political advisor to former Democratic Sen. Dennis DeConcini. “He’s more data and science driven than he is politically driven. This is a guy that is truly going to go to Washington and be an independent thinker. He is going to be someone that will be bipartisan. He’s going to approach things fact-based instead of politically-based.”

“It’s very refreshing,” Ober added. “He does his homework on everything, and he asks lots of questions.”

Aaron Rottenstein, who serves as a trustee for the Jewish Community Foundation in Arizona, agreed. “There’s a ton of organic enthusiasm in the Jewish community for Mark,” he said, adding that McSally hasn’t made an effort to engage with Arizonan Jews. (Her campaign did not respond to a request for comment.)

“Jews have always, as a people, really prioritized knowledge and education and expertise, and right now in politics it seems like a lot of people are ignoring those things,” Rottenstein said. “Mark clearly isn’t that person.”

Kelly, whose wife is Jewish, is deeply connected to the concerns of Arizona’s Jewish community, Rottenstein averred. “He’s not someone who’s going to use Israel as a partisan cudgel.”

Kelly’s connection to the Jewish state is personal. He was stationed in Houston with the Israeli astronaut Ilan Ramon, who died in the Columbia space shuttle explosion in 2003. Kelly, who traveled to Israel for the first time just months before he announced his Senate bid, is still close with the Ramon family.

Kelly believes that his combat experience gives him unique insight into foreign policy, particularly in the Middle East.

“That experience and that involvement, I think, is really valuable if you’re going to be serving in Congress and dealing with issues that involve national security,” he said.

He said he had not read Trump’s Israeli-Palestinian peace proposal, but his estimation of the plan was positive on the whole.

“I always think it’s good that we continue to work with Israel towards peace in the Middle East,” Kelly told JI. “As long as we’re working with our friends in the region and our allies toward a two-state solution, I think that’s a positive thing.”

He believes that peace in the region is achievable. “It’s hard,” he said. “I mean, if this was easy, we would have done it decades ago, and we would have been successful. But just because it’s hard doesn’t mean anybody needs to give up. And the success of the State of Israel is just, I think, from a personal level, it’s important to so many Americans. I know it is for me.”

Alma Hernandez, a Mexican-American Jewish member of Arizona’s House of Representatives who has known Kelly for years, said that most Arizonans are rallying behind the former astronaut. “I think that the majority of Arizonans are ready for new leadership,” she said. “He’s someone who, I think, really has the character and the temperament to serve.”

For his part, Kelly is humble. “I don’t have all the answers, but I think I have a unique background as an engineer, as a Navy pilot for 25 years,” he said. “I served as an astronaut for 15 years. And I’ve worked on trying to solve some hard problems, and I think I can bring that to the U.S. Senate to try to help.”

Rottenstein was more direct in his assessment. “The dude flew the space shuttle,” he marveled. “It’s incredibly cool.”