A group of Jewish leaders, including six UJA-Federation of New York officials and interdenominational clergy, discussed religious tolerance and the best shawarma toppings 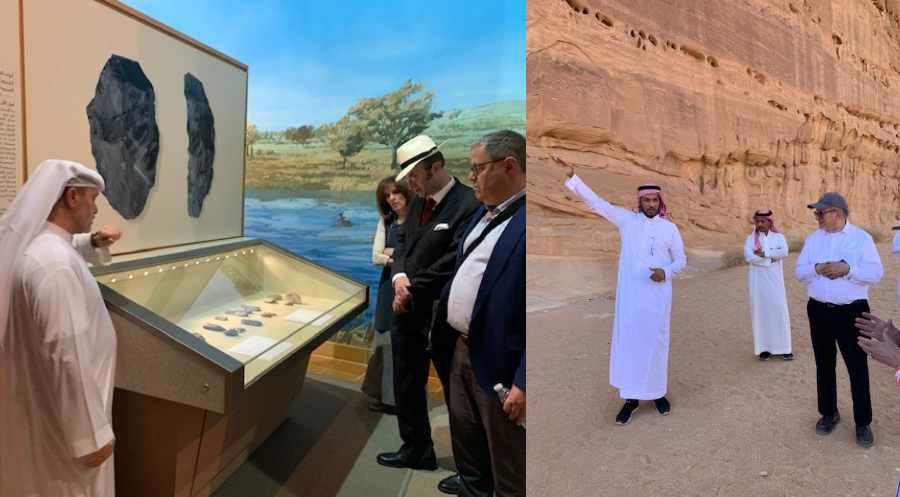 Participants on the UJA mission to Saudi Arabia

Against the backdrop of sweeping change in Israel-Arab relations, a group of 13 American Jewish leaders toured Saudi Arabia last week to learn about Islam and teach the Saudis about Judaism, the first trip of its kind for federation leaders and clergy to the Arab kingdom.

The four-day trip, which ended on June 16 and was organized by American philanthropist Eli Epstein, comes weeks before President Joe Biden’s upcoming trip to Saudi Arabia and Israel, where he is expected to push for relations between the two countries in an attempt to expand the number of Arab nations that have normalized ties with Israel over the last two years as a result of the Abraham Accords.

The visitors were hosted by the Muslim World League, a Saudi-funded nonprofit dedicated to promoting peace and tolerance.

Epstein, who founded a nonprofit organization called Vision of Abraham “to encourage travel of American Jewish leaders and other groups to understand the UAE in society and their leadership, and how the Abraham Accords fits into the arc of Jewish history,” helped plan the trip with the Muslim World League, and is currently planning other similar trips to Saudi Arabia.

The trip steered clear of discussion about Saudi Arabia’s human rights record, which has come under intense scrutiny, focusing instead on interfaith dialogue.

“Once you’re in something like those areas, it’s like a black hole, you really can’t climb out of it and do something else,” Epstein explained. “So we said, ‘let’s find the common areas first.’ It’s OK to refer to areas of differences, but we have a lot of building to do and commonality before we get into the harder issue.”

Goldstein said the trip achieved its goal of dialogue, referencing a conversation between one of the trip’s rabbis and a Saudi photographer, in which the two discussed shawarma toppings.

“You have a Saudi photographer, who has literally never ever spoken to a Jew, and the warm interconnection, and the sense of common worldview, where they came together around the best way to eat shawarma with the best topping is something that, you know, will inform his sense of Jewishness forever,” Goldstein said. “And it’s real. It’s amazing.”

Along with Goldstein, five other UJA-Federation leaders participated in the trip: Mark Medin, the group’s executive vice president; David Moore, its board chair; Amy Bressman, its president; and two of its campaign chairs. Also participating were Central Synagogue Rabbi Angela Buchdahl, who leads Central Synagogue, a Reform congregation in New York; Orthodox Rabbi Meir Soloveitchik; Epstein and his wife; Alex Peterfreund, a member of Dubai’s Jewish community; and two individuals from the Simon Wiesenthal Center.

The group met with Adel al-Jubeir, the Saudi minister of state for foreign affairs; the Muslim World League’s Dr. Mohammad Al-Issa; and officials at the Global Center for Countering Extremist Ideology.

The trip catered to participants’ religious needs. Attendees proudly wore yarmulkes in official meetings (although they concealed them beneath hats on the streets), and one attendee recited Kaddish each day in an ad-hoc traditional minyan. The Muslim World League provided kosher food and flew in two mashgichim from the UAE to certify the food’s kashrut.

In their meeting with Al-Issa, participants discussed the Charter of Makkah, a declaration authored by the Muslim World League that affirms human equality and religious tolerance.

According to Goldstein, the next step is to “take these principles and truly give them root in tangible ways,” and he is working to create collaborations between the Muslim World League and UJA-Federation of New York.

One idea for collaboration, he explained, would introduce American Jewish teenagers to their Saudi peers and empower them to work together on mutual challenges like combating climate change.

Medin commented on the degree of openness in Saudi Arabia.

“What struck many of us was our ability to take our phone out of our pocket and read the Times of Israel, or read Jewish Insider, or read the Jerusalem Post or Haaretz,” Medin told JI. “[They have] a totally open web system where any Saudi will connect to the web and any traveler to Saudi Arabia has the ability to follow the news in Israel.”

During the trip, Goldstein said he received a phone call from his son who lives in Tel Aviv, and noted that communication between Saudi and Israeli civilians was easy.

Goldstein left the country cautiously optimistic about prospects for relations between Israel and Saudi Arabia.

“This is not inevitable,” he said, “but you can’t walk away [anything] but excited by the potentially tectonic transformation.”