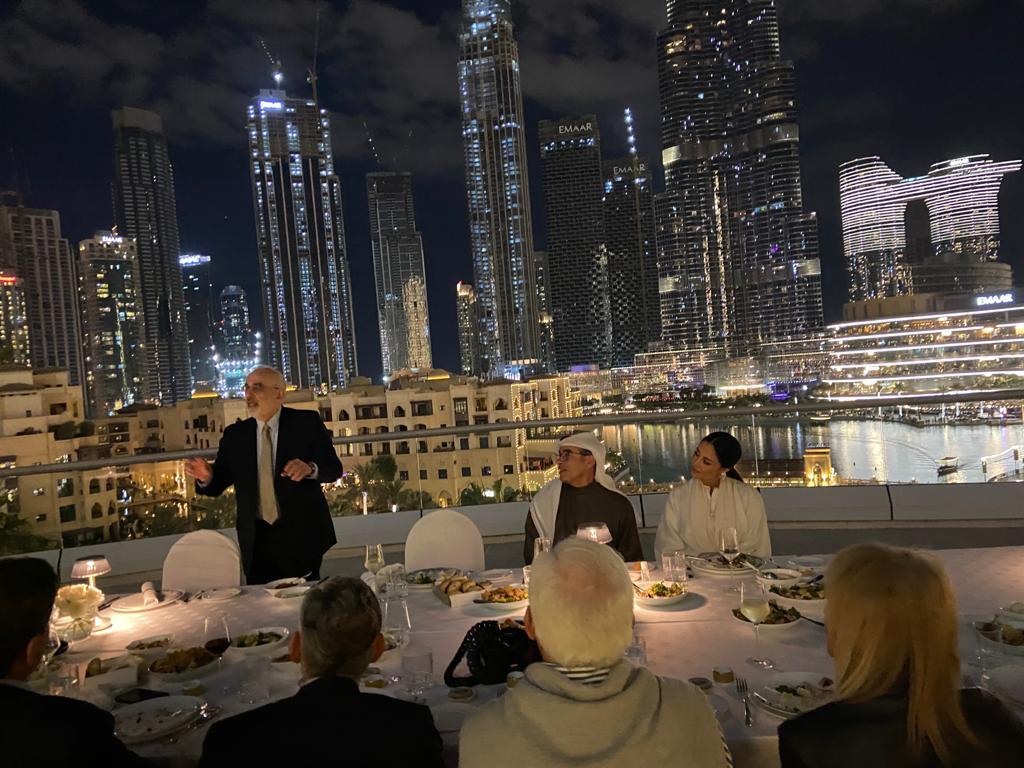 Tens of thousands of Israelis and Jews from around the world have visited the United Arab Emirates following last year’s historic signing of the Abraham Accords, many of them coming with a desire to learn about the intersection between the two cultures. And now, a new U.S.-based nonprofit is spearheading the effort to create and promote educational initiatives relating to interfaith programming between Muslims and Jews.

Visions of Abraham (VOA) seeks to provide an experience that looks at the impact of the landmark agreement through the creation of bespoke and immersive tours of the UAE and its Jewish community.

“Visions of Abraham encourages all levels of Jewish travel to the UAE,” Eli Epstein, the organization’s co-founder, told Jewish Insider. “We believe that experiencing the UAE allows for discovery of the people and the UAE and their values as well as the many amazing activities.”

The country saw an uptick in Jewish tourists during Hanukkah, when visitors from around the world came to celebrate the holiday with the local community — with many Emirati government officials also in attendance at the festivities.

In what New York Times columnist Thomas Friedman has called possibly “one of the most significant realignments in modern Middle East history,” the Accords have prompted not only business and trade — $570 million, according to the Central Bureau of Statistics — between Israel and the United Arab Emirates, but also interreligious and cultural dialogue. For example, new Hebrew-language schools holding classes in Dubai and Abu Dhabi include numerous Emiratis wishing to study in Israel or do business there.

Visions of Abraham has already begun offering its services to Jewish organizations planning delegations to the UAE and looking for an experience in the Gulf country that is tied to the Abraham Accords.

Most recently, the UJA-Federation of New York and the American Jewish Joint Distribution Committee collaborated with VOA to offer customized tours of the UAE for their delegations. During their stay, individuals from both delegations met with notable UAE personalities from the nonprofit, business and education sectors, including Sarah Al Amiri, minister of state for science & technology; Israeli Ambassador to the UAE Amir Hayek; Ambassador Marcy Grossman, Canada’s envoy to the Gulf nation; Ali Al Nuaimi, chairman of Hedayah; Mohammed Alabbar, founder and chairman of Emaar Properties; and Tahnoon Saif, CEO of Dubai South, among others. The delegations also toured the Abrahamic Family House, the interfaith complex on Abu Dhabi’s Saadiyat Island, scheduled to open in 2022.

Epstein explained that VOA specializes in making “in-depth encounters with the leadership of the UAE to enhance the understanding and appreciation of the country especially in the context of the Abraham Accords.”

“We arrange meetings depending on the group’s interest, and we can arrange for them to meet UAE leaders in business, education, religion or politics, for example,” he added. “We want our visitors to experience as much as possible of Emirati culture and the openness that is so apparent in their hospitality and to engage Jews from around the world and especially from Israel.”

VOA also donates profits to the Jewish Community of the Emirates (JCE) — and vice versa — enabling both to continue to welcome visitors.

“The JCE is allocating the funds it receives from Visions of Abraham for our operational expenses, which include hosting Shabbat and holiday meals for visitors and community members alike,” Alex Peterfreund, co-founder of Dubai’s Jewish community, told JI. “These Shabbat meals are extraordinarily exciting as we also have our Muslim neighbors join us and together, we discuss Muslim-Jewish relations. Additionally, the funds will go toward educational programs for children.”

Participants from the delegations explained how the VOA-organized experience in the UAE shattered their long-held stereotypes of the Gulf nation.

“Most on the trip were seeing the miracle called the UAE for the first time, with most preconceived notions shattered by the reality of what they experienced,” Jeff Schoenfeld, a delegation member, told JI. “I have been traveling to the UAE for over 30 years, and I found myself elated by the consistency and intentionality of the pro-women, pro-equality, pro-pluralism, pro-growth narrative that guides the country today. The pace of change is exponential now, with the Abraham Accords just the latest manifestation of the leadership that the UAE is bringing to the entire Gulf region.”

“There is much work ahead to build understanding between Muslims and Jews, and we sensed a great willingness — top-down and bottom-up — to foster this exchange,” Schoenfeld said.