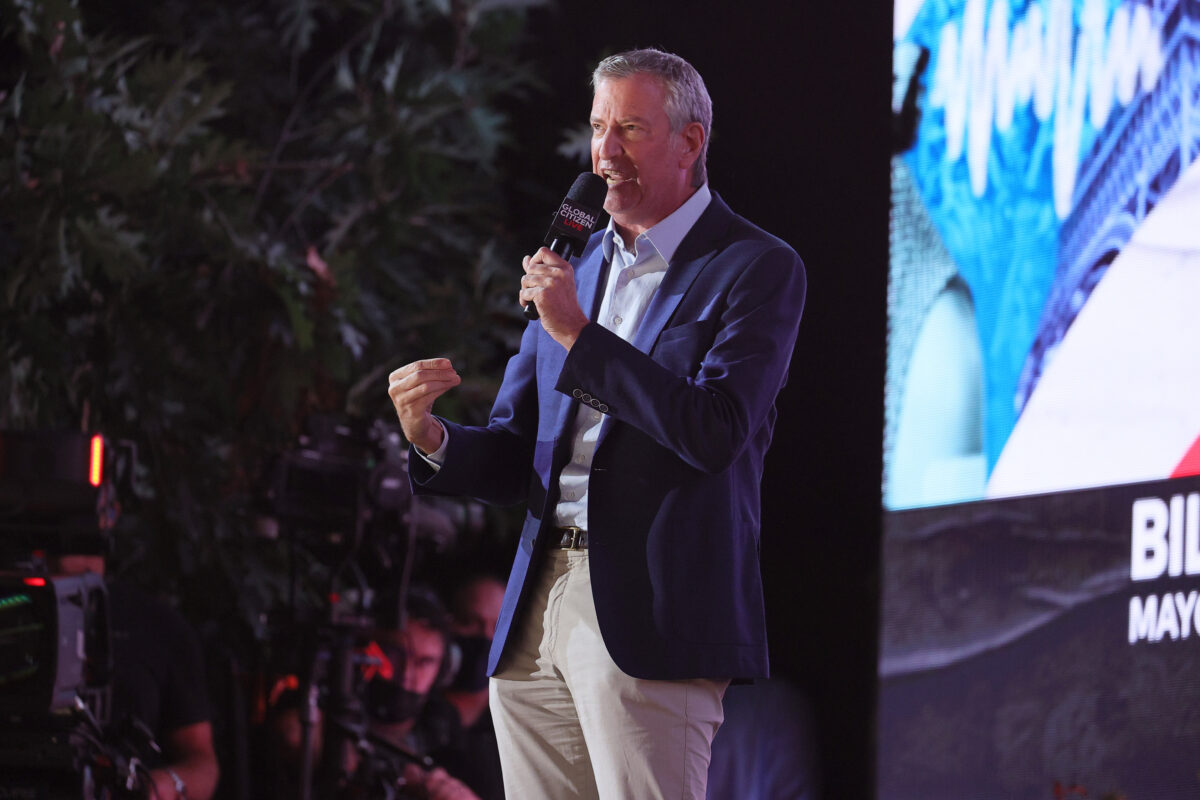 Bill de Blasio drew criticism from the Congressional Black Caucus on Monday over recent comments in which the former New York City mayor said he wished a friend and former two-time Democratic House candidate in Cleveland, Nina Turner, had been elected to Congress.

“We don’t agree with the comments made by former Mayor de Blasio and think that it diminishes the amazing work that Rep. Brown is doing,” Yolonda Addison, the CBC PAC’s executive director, told Jewish Insider on Monday. “However, due to her decisive win, she’s able to continue her working on behalf of the people of Northeast Ohio.”

Rep. Ritchie Torres (D-NY), a CBC member who stumped for Brown in the lead-up to last month’s Democratic primary, was even more critical of de Blasio, who is now running for Congress in New York’s redrawn 10th Congressional District.

“I find it striking that he would lament the defeat of Nina Turner and, by implication, the victory of Shontel Brown,” Torres said. “He is doing himself no favors by implicitly denigrating a well-regarded member of the House Democratic Caucus, a CBC member for whom the majority whip and the caucus chair campaigned in person.”

Reps. Jim Clyburn (D-SC), the House majority whip, and Hakeem Jeffries (D-NY), the chair of the House Democratic caucus, both appeared in Cleveland last month to gin up support for Brown, who defeated Turner by a two-to-one margin.

A spokesperson for Brown did not respond to a request for comment.

During a virtual candidate forum last week hosted by Our Revolution and the New York Progressive Action Network, de Blasio argued that attacks against Turner from an AIPAC-affiliated super PAC had not only been “horribly unjustified” but “deprived our nation of someone who could have been a huge difference-maker in terms of our progressive movement.”

His remarks raised concerns among some Jewish community leaders in New York City who were troubled that the ex-mayor said he no longer supported AIPAC and would not accept their endorsement if it were offered. De Blasio’s defense of Turner was also troubling to pro-Israel advocates who believe the former House candidate had embraced positions that were hostile to the Jewish state, including conditioning U.S. aid to Israel.

But Brown’s allies were equally irked by de Blasio’s statement.

“It says a lot that you would ultimately look to share comments like that, which I view as a form of disrespect to someone who potentially could be your colleague, or could have potentially been your colleague,” Antjuan Seawright, a Democratic strategist connected with the CBC, told JI. “I think the former mayor should focus on his race that will include a member of the Congressional Black Caucus and a colleague of Congresswoman Shontel Brown instead of focusing on things that have turned out to be not relevant not once but twice.”

Freshman Rep. Mondaire Jones (D-NY), who is seeking a second term in the newly drawn 10th District along with 14 other candidates, including de Blasio, has been endorsed by the CBC PAC. The district includes Lower Manhattan as well as some Brooklyn neighborhoods such as Borough Park, which is home to a sizable Orthodox Jewish population.

Jones, who is the only House incumbent in the race, currently represents New York’s 17th Congressional District. He endorsed Turner over Brown in the open-seat special election to succeed former Rep. Marcia Fudge (D-OH) in 2021, but did not back her again the following cycle when she sought a rematch with Brown.

A spokesperson for Jones did not respond to a request for comment.

Torres, a pro-Israel stalwart who has spoken at AIPAC events, also took issue with de Blasio’s repudiation of the bipartisan pro-Israel lobbying group, which recently launched an affiliated PAC and super PAC as it makes its first foray into campaign politics.

“De Blasio said AIPAC has changed in recent years,” Torres noted. “Left unmentioned is the fact that de Blasio himself spoke at AIPAC in recent years, as recently as 2019, and so his change of heart seems prompted by the hard-left sweepstakes that has become increasingly characteristic of competitive primaries in New York City.”

De Blasio, who defended AIPAC throughout his eight years as mayor and appeared at many of its events — even as some Democrats moved away from the organization — has insisted that he remains a strong supporter of Israel.

But he said in an interview with JI on Sunday that he could no longer support AIPAC because he believes its involvement in a number of recent Democratic primaries has been “counterproductive” and “doesn’t build more support” for Israel.

De Blasio further defended his remarks in a text exchange with JI on Monday.

“I am loyal to my friends,” he said. “For decades, I have had a deep and close relationship with the Jewish community. And yes, Nina Turner is my friend, too. I certainly respect Representative Brown and look forward to working with her for the good of our country. I think the goal needs to be greater unity. We need to unify all those who support Israel. I think AIPAC has strayed from that core mission and I urge them to return to it.”

Turner, for her part, responded to de Blasio’s comments in a Monday tweet to her more than 530,000 followers.

“Look, if I were in Congress, we wouldn’t be singing on the damn steps as abortion rights were being eroded,” she said, referring to House Democrats who sang “God Bless America” on the Capitol steps last week amid protests against the Supreme Court’s decision to overturn the constitutional right to an abortion. “But the corporations got their puppet.”