In an interview, de Blasio affirmed his pro-Israel views — including unconditioned aid — while distancing himself from the group 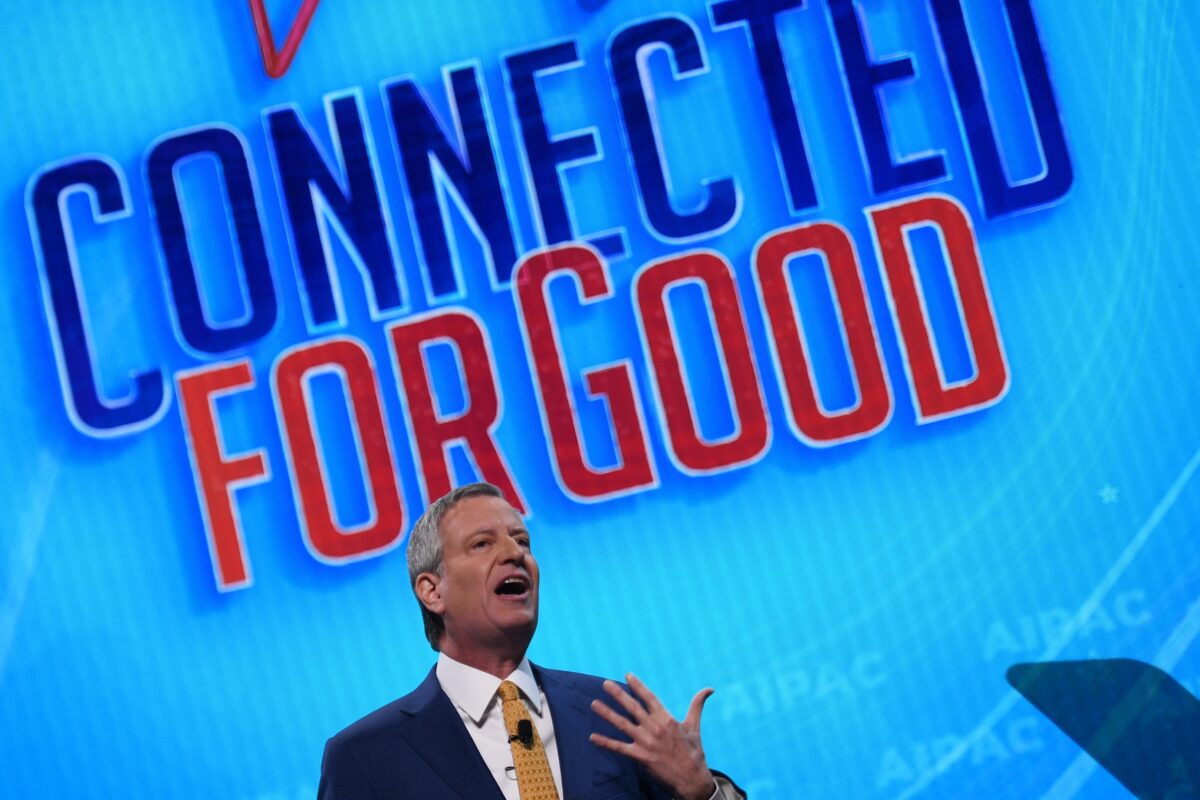 Former New York City Mayor Bill de Blasio is facing scrutiny from local Jewish community leaders over recent comments in which he came out forcefully against AIPAC and said he no longer supports the pro-Israel lobbying group because of its opposition to a friend and fellow progressive Democrat, Nina Turner, in a Cleveland-area House primary last month.

“They have changed in a way that is unacceptable to me because they have attacked people I believe in,” de Blasio, who is now running for an open seat in New York’s redrawn 10th Congressional District, said last Wednesday during a virtual candidate forum hosted by Our Revolution and the New York Progressive Action Network.

The attacks against Turner from a new AIPAC-affiliated super PAC, United Democracy Project, were “horribly unjustified” and “deprived our nation of someone who could have been a huge difference-maker in terms of our progressive movement,” de Blasio argued.

The ex-mayor’s remarks were a sharp turn away from previous instances in which he has defended AIPAC, made public appearances at AIPAC events and spoken at its policy conference, even as some Democrats have distanced themselves from the group in recent years. De Blasio has long identified as a staunch supporter of Israel and has maintained close ties to Jewish community members in New York City throughout his decades-long career in politics.

But his comments at the forum have raised concerns among Jewish community activists who are questioning whether his Middle East foreign policy views will remain consistent if he is elected to the House — or if he now aligns with Turner on such issues. The former Ohio state senator and presidential campaign surrogate for Sen. Bernie Sanders (I-VT) was defeated last month in a primary rematch against freshman Rep. Shontel Brown (D-OH) that drew more than a million dollars in outside spending from pro-Israel groups over Turner’s alignment with the Squad and her support for conditioning U.S. aid to Israel, among other things.

“From my point of view, I know what I believe in,” de Blasio continued in a phone conversation. “I believe in supporting Israel and providing the defense support that Israel needs. From my understanding, Nina Turner thinks aid should be conditioned. I disagree with that. I think we have to protect Israel.”

De Blasio insisted that he “can simultaneously be a very proud progressive and a very proud supporter of Israel and opponent of BDS,” using the abbreviation for the Boycott, Divestment and Sanctions movement targeting the Jewish state. “I don’t see any contradiction.”

“I believe Israel is a progressive idea, because it is the expression of that core progressive value of stopping oppression, discrimination, bigotry and violence,” he added. “Israel is a response to two millennia of state-sponsored violence against the Jewish people in multiple continents, and so when you think about that history, and you say, ‘OK, now a homeland is created to address that history,’ that’s inherently progressive. That is, to me, as core to my values as anything I could imagine, and I would like people in that homeland to live in peace, which is why I believe there needs to be a structural solution with a two-state solution.”

De Blasio’s efforts to clarify his comments come as he seeks to shore up support from Jewish community leaders in Brooklyn, particularly in the heavily Orthodox Brooklyn neighborhood of Borough Park, which sits in the new 10th District. Last week, after meeting with Jewish leaders in Borough Park, de Blasio apologized for a 2020 tweet in which he had singled out the Jewish community for violating social distancing protocols at the beginning of the pandemic.

David Greenfield, a former New York City councilman who serves as the CEO of the Met Council, said in an interview with JI that he was “surprised by” de Blasio’s comments at the candidate forum last Wednesday, not least because the ex-mayor “has a long history of being supportive of Israel.”

“That’s why I’m willing to give him the benefit of the doubt to clarify what it is that he meant,” Greenfield added. “I think that there are not a lot of federal issues that speak strongly to the Borough Park portion of this district, but there’s no doubt that any candidate’s support of Israel is going to be a litmus test for whether or not that candidate gets the support of the Borough Park Jewish community.”

The former mayor said he has reached out to a number of Orthodox leaders in the district, which includes Lower Manhattan as well as such Brooklyn neighborhoods as Park Slope, Cobble Hill and Sunset Park. “I certainly am going to work hard to earn their support,” de Blasio told JI. “I don’t presume. I don’t have a prediction for you. I just know that these are very long-standing relationships.”

“My support for Israel and opposition to BDS is something I feel profoundly, and it’s very personal,” de Blasio said. “It’s very personal based on relationships I’ve developed and stories I’ve heard and learned from people about their own families. If you spend time in Borough Park, you will spend time with many families who lost members during the Holocaust. I’ve met many, many Holocaust survivors, and it is part of why, to me, the resurgence of antisemitism around the world, I don’t take it idly. I see it as a profound threat, because when you spend time with people who are victims of it in our lifetime, in that recent history, it’s not abstract.”

As for his long-standing relationship with AIPAC, de Blasio reiterated that he had no interest in courting support from the bipartisan advocacy group, which recently launched a political action committee and a super PAC as part of its first foray into campaign politics.

“For many years, I had a good relationship with AIPAC, and I would like to see them go back to being a less partisan, more inclusive organization,” he said, criticizing the group’s recent involvement in a number of Democratic primaries where United Democracy Project has opposed progressive candidates who have been critical of Israel. “To see them get in the middle of primaries, I think, is counterproductive, and I think it doesn’t build more support, which I thought was the idea.”

De Blasio said “there is widespread support for Israel in the Democratic Party and the Republican Party,” and argued that “we should all work together to build that support.”

“What I would urge is, let’s look for more unity,” he added, noting that he had recently taken a closer look at Turner’s Middle East foreign policy positions and appreciated that she had expressed support for Israel and opposed BDS. “That’s a really good starting point. Now, that doesn’t mean you have to agree with her on everything else. That doesn’t mean I don’t have areas of disagreement with her, which I’ve spoken to her about. But I think my advice to AIPAC is, expand the tent, don’t make it smaller.”

Marshall Wittmann, a spokesperson for AIPAC, suggested in a statement to JI that de Blasio’s comments were misguided.

“It is unfortunate that Bill de Blasio has not been consistent in his commitment to the pro-Israel cause and his past support for our work to strengthen the U.S.-Israel relationship,” he said. “He has now reversed course and is taking the side of those who would weaken our alliance with Israel. We will not be deterred in our efforts to support pro-Israel candidates – including scores of progressives and candidates of color – and oppose those who are detractors.”

But de Blasio rejected such arguments. “What I know, which is morally grounded, is I’ll fight for Israel every time,” he told JI. “It’s who I am, it’s who I’ve been and I will continue to be.”