Shontel Brown notches primary win: ‘This was a faith fight’ 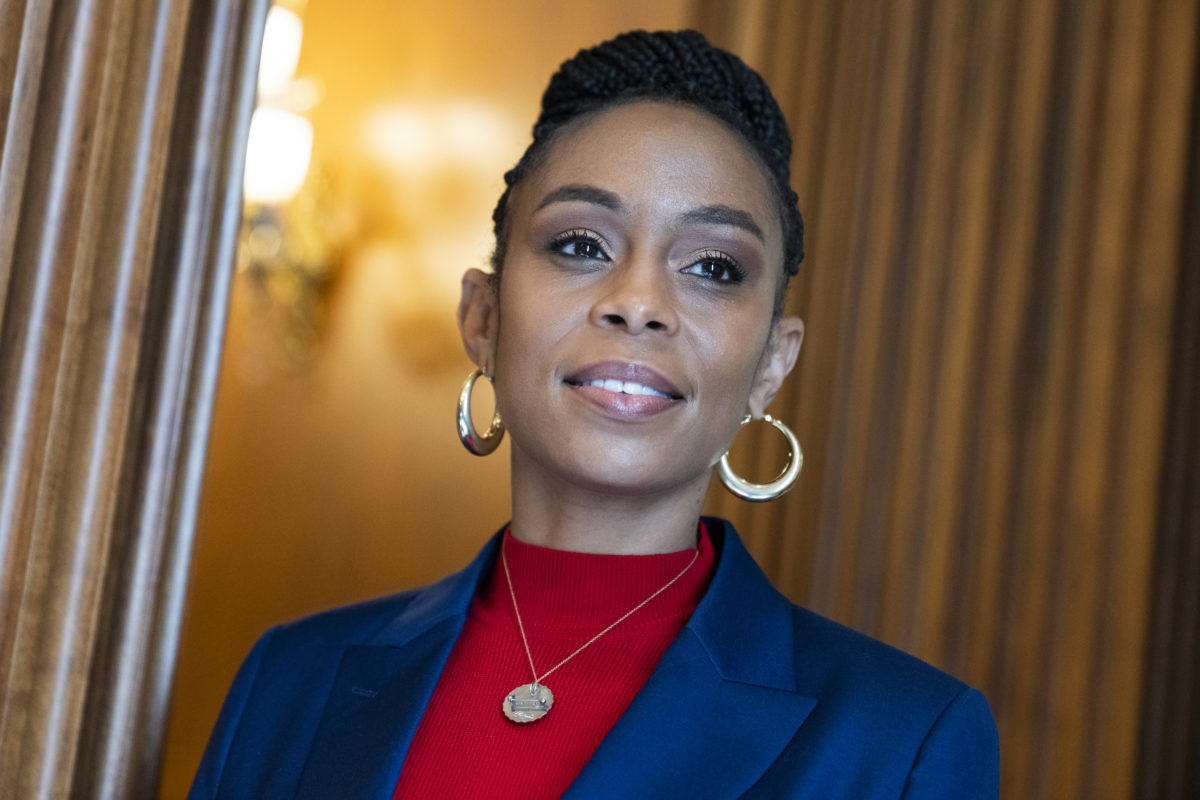 Rep. Shontel Brown, (D-OH), is seen in the U.S. Capitol’s Rayburn Room after a group photo with the Congressional Black Caucus, on Wednesday, April 6, 2022.

CLEVELAND — As a cluster of gathering storm clouds prepared to burst just after polls closed on Tuesday evening, the stage had been set for an appropriately cathartic end to the bitter primary rematch between Rep. Shontel Brown (D-OH) and Nina Turner in Cleveland and its surrounding suburbs.

With two-thirds of the vote, Brown claimed a decisive victory over her opponent, setting her up to win her first full House term in November and bolstering her position as the establishment heir to Ohio’s 11th Congressional District.

“This was a faith fight,” Brown said last night at a post-industrial event space in downtown Cleveland. “It’s always been a faith fight for me. The first time, the odds were stacked against us.”

The former Cuyahoga County councilwoman was defending the seat only six months after assuming office and nine months after she had pulled an upset in the special House election to succeed former Rep. Marcia Fudge (D-OH). Brown overcame an initial polling deficit of more than 30 points to defeat Turner by a single-digit margin in the high-profile race.

“This time felt different for me because we were leading, but I still was a little unsure,” Brown explained in her victory speech. “I’m just going to be fully transparent about that because we can’t take anything for granted.”

If Brown performed better than expected on election night, it was partly because the race had simply been more difficult to read. There was no publicly available polling, for instance, and the newly drawn district lines had pulled in a sizable portion of new voters, contributing an added layer of uncertainty.

The party was attended by a number of local Democratic officials, most notably Justin Bibb, Cleveland’s newly elected mayor. While Turner endorsed Bibb when he ran for mayor last year, he did not return the favor in the primary and instead threw his support behind Brown, who has built strong ties with Cleveland’s Democratic establishment as a Cuyahoga County party chair.

“I don’t care what you call it — progressive, Democrat, I want a fighter in D.C.,” Bibb said last night, drawing snickers from the audience.

The first race had been cast as a sort of proxy battle between warring moderate and progressive forces within the Democratic Party. Turner — a former presidential campaign surrogate for Sen. Bernie Sanders (I-VT) — consolidated endorsements from the Squad while Brown picked up support from high-ranking House leaders such as Reps. Jim Clyburn (D-SC) and Joyce Beatty (D-OH).

But Turner was unable to build the same coalition as a challenger facing off against a freshman incumbent. While Sanders and Rep. Alexandria Ocasio-Cortez (D-NY) both endorsed Turner’s campaign, other big supporters who backed her had steered clear of the race.

Brown, for her part, joined the Congressional Progressive Caucus when she entered the House and earned an endorsement from its political action committee last month. The CPC’s PAC had supported Turner in the special election.

Reps. Jim Clyburn (D-SC), Hakeem Jeffries (D-NY), Ritchie Torres (D-NY) and Nikema Williams (D-GA) all appeared in the district to stump for Brown last weekend, touting, among other things, her vote in favor of the $1 trillion bipartisan infrastructure package. On the Friday before the election, President Joe Biden announced his support for Brown.

Brown also received repeat endorsements from pro-Israel groups including the Jewish Democratic Council of America, Pro-Israel America and Democratic Majority for Israel, which spent more than $1 million in the race.

Turner had attempted to chip away at Brown’s support among Cleveland’s sizable population of Jewish voters who helped deliver her to Congress last year.

But Pinchas Landis, an Orthodox Jewish rabbi who lives in the suburb of University Heights and delivered remarks at Brown’s event, suggested that the Jewish voters had stood with Brown. “We saw a woman who brought this community together,” he explained. “Seriously, by a show of hands, how many of you, on a Tuesday night in May, would be listening to a rabbi speak in downtown Cleveland? Seriously now, come on! Yet here we are!”

“For the Jewish community especially, times are tough,” he said to the audience, which included several Jewish supporters. “As I’m sure you know, there’s been a rise in antisemitism. There’s more Jew hatred in the world right now than ever before. So, to have a congresswoman who’s willing to stand up and cosponsor legislation supporting the state of Israel or to stand up and tweet that antisemitism has to stop — that is something that truly is remarkable.”

Brown expressed a similar if somewhat more bluntly stated level of gratitude to her own supporters on election night.