Ritchie Torres in Cleveland for Shontel Brown: ‘She’s a uniter’

'Shontel is a national symbol of a central truth,' Torres mused, 'that you can be both progressive and pro-Israel' 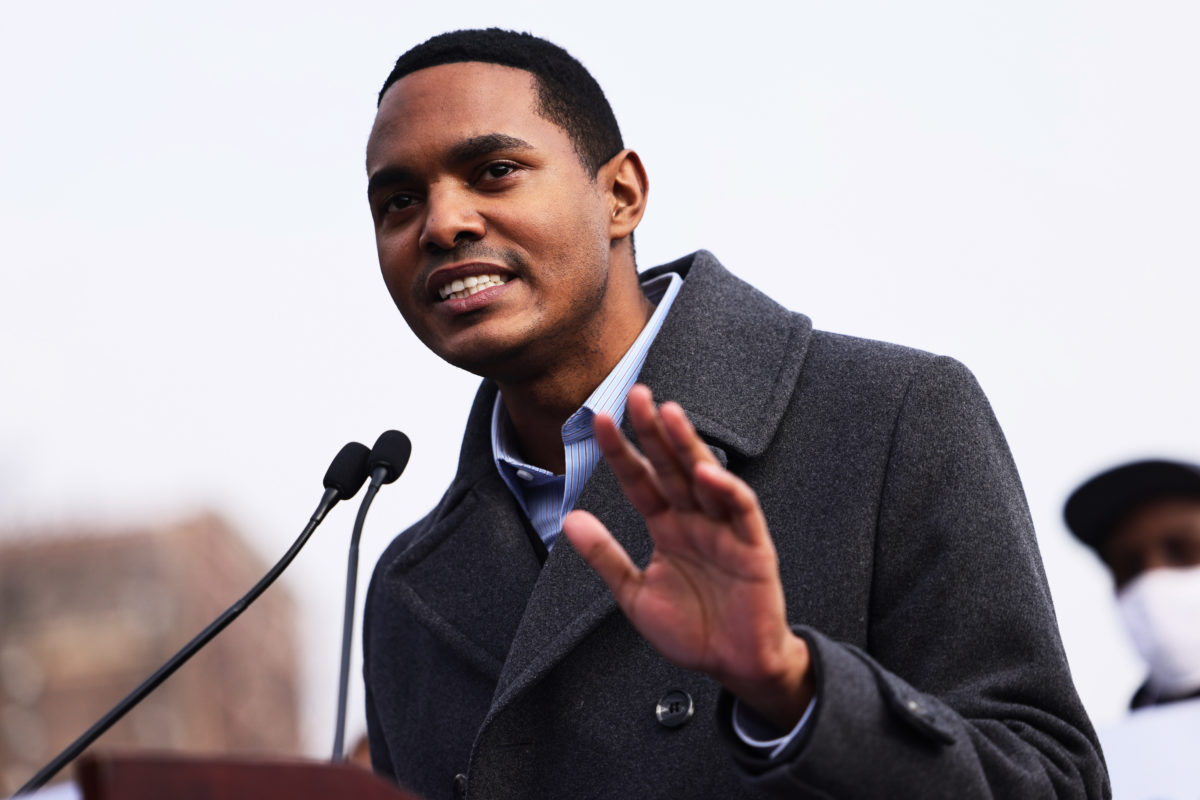 Rep. Ritchie Torres (D-NY) had never campaigned for a House colleague — nor had he ever been to Ohio, for that matter — before his arrival in Cleveland on Saturday to boost a fellow freshman lawmaker, Rep. Shontel Brown (D-OH), as she seeks her first full congressional term in today’s primary.

“I believe in Shontel so deeply that I felt motivated to campaign in Ohio and then travel back to New York in time for a wedding,” Torres, 34, quipped in an interview with Jewish Insider on the eve of the election.

Torres, who represents the South Bronx, expressed an affinity for Brown as a self-identified progressive who, at the same time, has remained vocally supportive of Israel amid mounting far-left hostility toward the Jewish state.

“Shontel is a national symbol of a central truth,” Torres mused, “that you can be both progressive and pro-Israel. That the notion that you cannot be both is a vicious lie that should and must be finally put to rest.”

Torres conveyed a similar sentiment to voters in Cleveland and the surrounding suburbs that make up Ohio’s newly redrawn 11th Congressional District, where, among other things, he met with Jewish community members who helped deliver Brown to Congress last cycle.

“I think Shontel and I are both pragmatic, pro-Israel progressives,” Torres, who has garnered a fan base in the Jewish community, told JI. “She is not a divider, she’s a uniter, and she rightly rejects the attempts to alienate the Jewish community from the progressive movement or alienate the United States from Israel. Her mission in life is to bring people together.”

Turner, an ally of Sen. Bernie Sanders (I-VT) — for whom she served as a surrogate during the 2020 Democratic presidential primary — has upped her engagement with Jewish voters this cycle. It remains to be seen if such outreach will ultimately be successful in dispelling the charges of antisemitism and anti-Israel prejudice that had dogged her previous bid.

For his part, Torres made no mention of Turner, 54, during the conversation with JI. “My campaigning in Ohio was an affirmation of Shontel Brown rather than a negation of someone else,” he said.

“We need elected officials who will be uncowed in showing solidarity with the Jewish community and the Jewish state,” Torres told JI, “while at the same time expressing empathy for the plight of the Palestinians and advocating for a two-state rather than a one-state solution.”

The New York City congressman was among several House Democrats in Cleveland this weekend, including Reps. Nikema Williams (D-GA), Hakeem Jeffries (D-NY) and Jim Clyburn (D-SC), “who poignantly said that he sees his own daughter in Shontel Brown,” according to Torres. “He made a powerful case for Shontel as only Jim Clyburn could.”

Before her election to federal office, Brown was a Cuyahoga County councilwoman and party chair with strong ties to the local Democratic establishment.

During her first months in office, “she has emerged as one of the most beloved members of Congress,” Torres said. “When my colleagues were asking me, ‘What are you planning to do on the weekend?’ and I told them that I’m going to campaign for Shontel in Ohio, the common refrain was the same: ‘We love Shontel.’ She’s built relationships in Congress and she’s leveraged those relationships to deliver for the people.”

“She governs from the heart,” Torres added, “and how she governs in Washington, D.C., is an extension of who she is.”

In American politics, he said, “there is a growing divide between performers and problem solvers,” Torres said. “Shontel is a bona fide problem solver. She has delivered billions of dollars in infrastructure investment for the people of Ohio, accomplishing more in a few months than many elected officials accomplish in a lifetime.”

While Brown took office just days before casting a vote in favor of the $1 trillion infrastructure package — whose benefits she has touted on the trail — Torres dryly noted that his own congressional entrée began under somewhat less promising circumstances. “My first week in Congress included the insurrection,” he said, gearing up for what seemed like an improvised punchline. “Shontel’s first week included infrastructure. She had a much more auspicious beginning to her congressional career than I had to mine.”