Benny Gantz: ‘Hard to see’ where coalition ‘will be next week’

Israel’s defense minister expressed uncertainty about the future of Israel’s teetering coalition government, which recently lost its majority in the Knesset 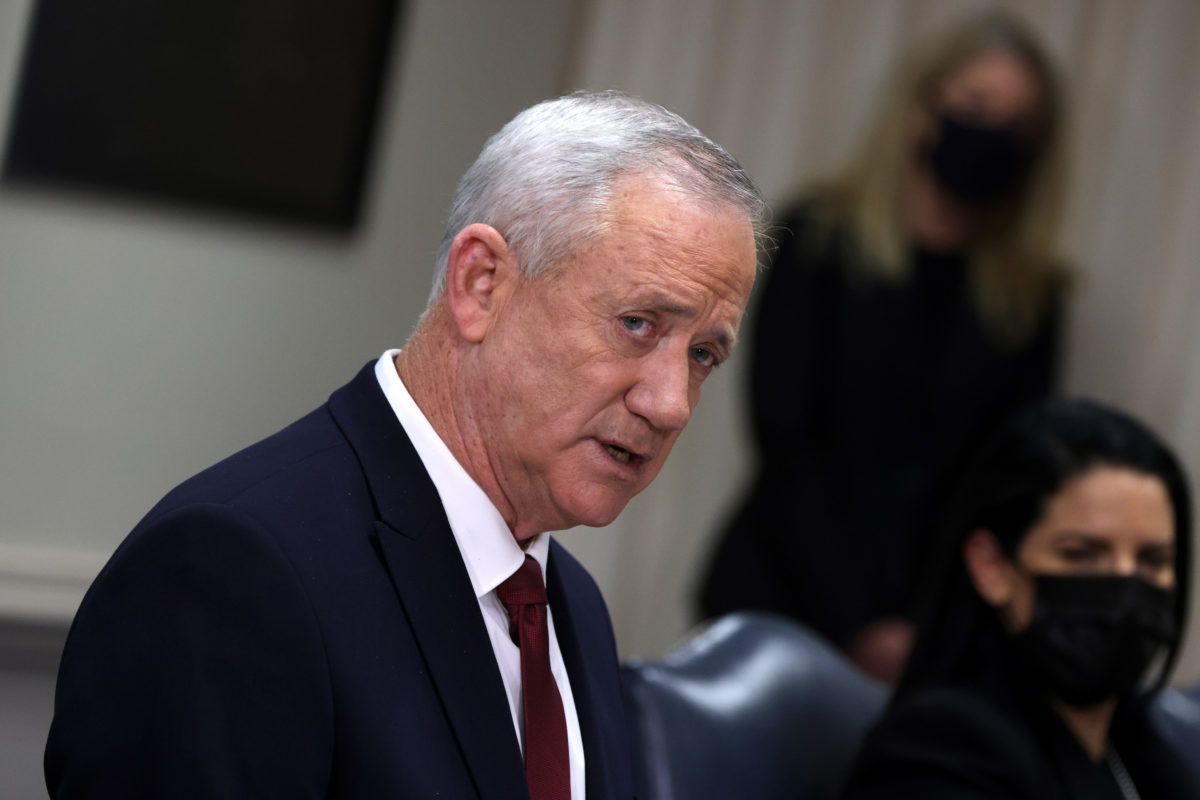 Israeli Minister of Defense Benny Gantz speaks during a meeting with U.S. Secretary of Defense Lloyd Austin at the Pentagon December 9, 2021 ,in Arlington, Virginia.

“I hope that we can keep the government… it is very hard to see where are we going to be next week,” Gantz said at a virtual event on Monday with The Washington Institute for Near East Policy. “I know where we want to be next week. We want to be with a functioning government, responsible government that serves the entire society of Israel.”

Gantz’s Blue and White Party holds eight seats in the Knesset. Knesset member Idit Silman’s decision to leave the coalition government last week deprived it of its majority and presaged a potential new round of elections.

“It’s very hard to tell,” what will happen with the coalition, Gantz, who served as alternate prime minister in the previous government led by former Prime Minister Benjamin Netanyahu, added later. “I can tell you this — while you can never be sure who will be the governing party or coalition, I can assure you that Israel gets to stay [a] democracy.”

Gantz also discussed a range of topics regarding Israeli-Palestinian relations and security policy.

He repeatedly stated that, in the near term, Israel must “find ways to live with the Palestinians” in a “two-entity situation” short of a two-state solution. He said that the invocation of a two-state solution “creates a huge gap between an old phrase on one hand and a very faraway vision on the other hand.”

The defense minister, who supervised Israel’s “Operation Guardian of the Walls” response to the May 2021 rocket attacks on Israel from Gaza, said that Israel has been “very conservative as far as military activities” regarding Gaza since then, focusing instead on humanitarian and economic relations with the Palestinians.

He called for Israel to continue its “confidence-building measures” with the Palestinian Authority and to strengthen its ties with the PA at all levels — particularly security cooperation. He said his goal is to ensure Israel’s security while “investing in the future of the Palestinians” and ensuring that Israel remains Jewish and democratic.

Gantz said it is “very important” that some PA officials and local leaders have condemned the wave of recent terrorist attacks in Israel, but noted that others are “inciting terror.” He called for “concrete action by the Palestinian Authority” but said Israel “obviously won’t be waiting for them.”

He pledged that, if overall tensions remain low, he will expand various programs benefiting Palestinians, including a program allowing some Palestinians to pray at the Al-Aqsa Mosque without permits and issuing work permits to Palestinians living in Gaza.

“If it stays quiet, I will increase it,” Gantz said, of the work permits. “If it goes wrong, I’ll have to cease it. I hope they will understand it.”

The defense minister also addressed the possibility of a new Iran deal, calling on negotiators to “minimize the loopholes that we are seeing within the deal itself.” He noted that Iran is much closer to a nuclear weapon than it was in 2015 when the original Iran deal was struck, and predicted that the funds Iran would gain through a deal would generate an uptick in other regional malign activities.

“I understand the American wish to put the Iranian issue back in the box. But if you don’t close the open loopholes, you’re going to get a serious problem down the road,” he said. “I understand what are the benefits of a potential deal as long as it [has] taken care of what needs to be taken care of.”

In the absence of a deal, Gantz said that Israel wants to create a broad intelligence coalition against Iran to “compensate for the lack of inspection capabilities” and  intercept Iran’s other malign activities both in the Middle East and throughout the world. He said he also “definitely” sees a “possibility” for regional anti-missile and anti-drone cooperation.

He argued that the cautious Western military response to Russia amid Moscow’s invasion of Ukraine — which “has to do with the fact that Russia is a nuclear superpower” — highlights why Iran must be stopped from obtaining nuclear weapons capabilities.

“All the calculus becomes somewhat different when you have such a challenge,” Gantz said. The other lesson from the Ukraine conflict, he added, is “eventually, you need to solve your own problems. Nobody comes to help.”

Gantz rejected criticisms that Israel has not taken a hard enough line against Russia in the ongoing conflict.

“I hear the criticism, I don’t accept it,” he said. “We are a small country with lots of regional considerations that we need to take in consideration… We are sharing an aerial border with Russia practically speaking over the skies of Syria and Lebanon, and I think that we are acting right.”