10 new books to read in October 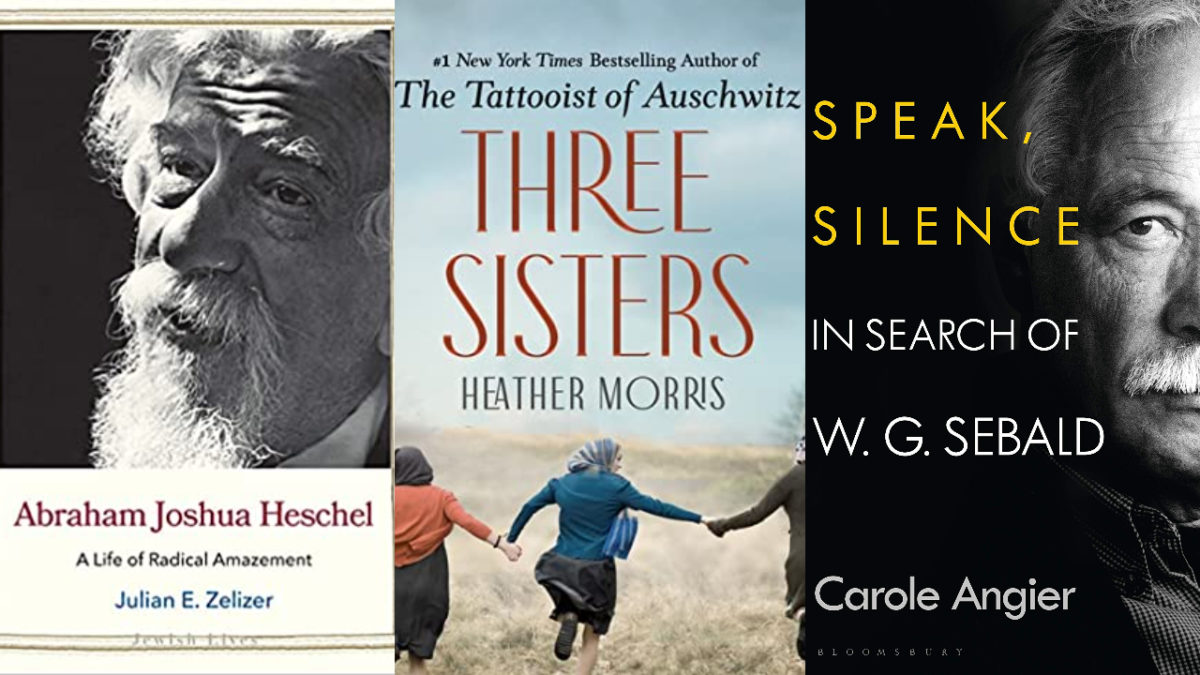 In the second installment of a new series exploring new and upcoming books, the team at Jewish Insider previews some of the top and relevant new titles coming out in October:

Three Sisters, by Heather Morris (Oct. 5): Heather Morris’s third book in the bestselling Tattooist of Auschwitz series, Three Sisters is a work of historical fiction loosely based on the story of survival of Cibi, Magda and Livia, three Jewish sisters from Slovakia who are imprisoned in Auschwitz and later move to Israel in the post-war years.

Speak, Silence: In Search of W. G. Sebald, by Carole Angier (Oct. 5): Carole Angier pens the first biography of the late German author, who died in a car accident in 2001. Speak, Silence looks at how Sebald, whose father spent the younger Sebald’s early years in a prisoner of war camp, channeled his own questions and feelings about the Holocaust into his writing.

Judah Benjamin: Counselor to the Confederacy, by James Traub (Oct. 5): Judah Benjamin rose to prominence as a Louisiana legislator — and one of the few Jewish politicians — before serving as secretary of state for the Confederacy after the South seceded from the United States. James Traub takes on the gargantuan task of producing a biography of an elusive man who left very little written trace of his true beliefs and thoughts.

Squirrel Hill: The Tree of Life Synagogue Shooting and the Soul of a Neighborhood by Mark Oppenheimer (Oct. 5): In the year following the deadly shooting at the Tree of Life Synagogue in October 2018, Tablet senior editor Mark Oppenheimer made more than 30 trips to Pittsburgh, where his ancestors had settled over a century earlier, to chronicle the resilience of the Squirrel Hill neighborhood, where much of the city’s Jewish population lives.

Come and Hear: What I Saw in My Seven-and-a-Half-Year Journey through the Talmud, by Adam Kirsch (Oct. 8): For nearly eight years, poet and literary critic Adam Kirsch wrote about his experience with Daf Yomi, the daily reading of a page of Talmud. The secular Kirsch writes about his journey through the text through observations that range from the mundane to serious, taking readers along for a ride few non-religious Jews ever experience.

The Lost Café Schindler: One Family, Two Wars, and the Search for Truth, by Meriel Schindler (Oct. 12): Following her father’s death in 2017, attorney Meriel Schindler began to research her family history dating back more than a century to Innsbruck, Austria, to learn how generations survived and thrived — and eventually had their dreams destroyed by the Holocaust. Schindler explores her complicated relationship with her late father, who fled the Nazis as a teenager, and the timeline of ownership of her family’s famed restaurant, Café Schindler.

It’s Better to Be Feared: The New England Patriots Dynasty and the Pursuit of Greatness, by Seth Wickersham (Oct. 12): Seth Wickersham, a senior writer at ESPN, takes a detailed look at the New England Patriots franchise, including emails, game plans and text messages, to better understand the team’s top names: owner Robert Kraft, head coach Bill Belichick and quarterback Tom Brady, who left the team in 2020.

Meir Kahane: The Public Life and Political Thought of an American Jewish Radical, by Shaul Magid (Oct. 12): Rabbi and academic Shaul Magid explores the life and impact of one of the most controversial figures in modern-day Zionism, looking not just at the American-born Kahane’s influences but also his legacy following his assassination in 1990.

In the Midst of Civilized Europe: The Pogroms of 1918–1921 and the Onset of the Holocaust, by Jeffrey Veidlinger (Oct. 26): Historian Jeffrey Veidlinger shines a light on the three-year period, from 1918-1921, when more than 100,000 Jews were killed in pogroms across modern-day Ukraine. Veidlinger uses historical texts as well as testimonies from survivors to compile this compendium on Eastern Europoean antisemitism that lays the informational groundwork for what would decades later result in the Holocaust.

Abraham Joshua Heschel: A Life of Radical Amazement, by Julian Zelizer (Oct. 26): Much is known about Rabbi Abraham Joshua Heschel’s social justice efforts alongside Civil Rights activists in the second half of the 20th century. Julian Zelizer looks at Heschel’s early years growing up in Poland and eventual opportunity to come to the U.S. just as the Holocaust was beginning.